I’ve been to Salt Spring Island many times, primarily as a kid in the backseat of my family’s car as we trekked our way north from California. We camped along the way, but once on Salt Spring we always stayed at my aunt and uncle’s house so I’ve never had the pleasure of camping there before now. I have, however, biked there once before: four years ago I borrowed a three-sizes-too-big bike and panniers and left early in the morning for a one-night journey to the island and back. It was quite the whirlwind trip, but very worth it to visit with my aunt and uncle before their health failed. The visits (by car) bringing kids of my own were rewarding, too, of course, but it was nice to have a very focused visit this one time.

I started a blog post about that trip, but never finished it. I don’t think I discovered anything that I won’t write about for this new trip other than: consider not doing a big trip on a bike three sizes too big because it might really hurt your back. And wash your old water bottle out well because you can food poison yourself–which is really not fun on top of an aching back. Here’s a photo from that trip. I also learned brown bikes with brown panniers don’t photograph well in woodsy settings.

My friend Velotron joined me and it was awesome to have company this time. It was also awesome to do it on an appropriately-sized bike and with clean water bottles. Unfortunately, Velotron’s commuter bike was out of service so he was on his too-small bike he uses for hauling his cargo trailer. And I think his back was bugging him on account of that. By the way, Velotron is my friend from Bike camping in Iron Horse State Park, take two last year. I had been pretty bummed out we weren’t going to get a chance to do a repeat John Wayne Pioneer Trail trip, but with my broken foot still on the mend, I haven’t been much for planning big trips. I’d certainly call this trip big, but I didn’t need to do planning in the sense of deciding on a destination or date. My aunt died last November and my uncle the year before. This was the weekend of her birthday so on the Friday friends and relatives scattered their ashes at sea (unfortunately I couldn’t make it all the way to the island in time for that) and on Saturday we had a memorial luncheon.

Maps. Or, my love letter to Ride with GPS
I want to interrupt my trip report with a love letter to Ride with GPS. Four years ago I did my routing at home with Google maps and hand wrote turn by turn directions on a piece of paper. It was a nerve-wracking experience, wondering if I’d made the correct turns on the trails of Vancouver Island while racing the clock to catch my second ferry.

I still use Google maps as my initial route planner, but if I want to save a route, I use Ride with GPS. For this trip, I saved eight routes, one for each leg of the trip: Ride with GPS – My Routes. I’m too frugal to invest in an international data plan when I visit Canada so I downloaded the maps of those eight routes for accessing offline. Now what I didn’t realize ahead of time is that even in airplane mode, I could get turn-by-turn navigation! It didn’t occur to me that GPS is independent of internet despite having used my Garmin GPS bike computer to record rides (stored until I’ve found wi-fi and then transferred to my phone via Bluetooth and ported over to my Strava account).

So yeah, turn-by-turn navigation! In Canada! Impossible to get lost! Note: I have a Ride with GPS paid Basic account, but you can still do a lot even with the free account: create routes, download routes, and record a ride (I rarely record with Ride with GPS because I’m already used to my Garmin/Strava system for when I want to keep track of things, but I imagine I’ll do more Ride with GPS recording in the future). What the free account doesn’t do is turn-by-turn navigation. And I see the premium account (fancier than my basic account) also gives estimated times. I got estimated times from Google maps and included it in the name field–for example, “Ruckle Provincial Park to Twig and Buoy (1.5 hours)”–but for long field names like that one, I had to click to edit it in order to see all the way to the end of the title on my little phone display. Another note: I had a discount code when purchasing my Ride with GPS account for being a Cascade Bicycle Club Ride Leader.

Ooh, and I found the screen with elevation profile! I’m not sure if following my blue dot slowly climb the hill was all that helpful or if I was just punishing myself. Maybe Chris Froome Looking at Stems isn’t missing out on the experience after all, because I still had a great time even as I grunted constant reports about how close we were to the top and what came next.

Itinerary
Since I had to bring my kids to summer camp at 9:00 a.m., I couldn’t catch the 7:30 a.m. Victoria Clipper ferry like last time so we took the 3:15 p.m. one. It’s a passenger-only (no cars!) high speed ferry–less than three hours to get from Seattle to Victoria. It’s pricier than Washington State Ferries, but it’s so convenient! Bikes are $20 (cargo bikes and tandems are $40) each way and they’re parked outside under a tarp, but still exposed to salt spray so some people don’t bring bikes for that reason.

The ferry to Salt Spring Island’s Fulford Harbour leaves form Swartz Bay which is two hours north of Victoria. I found a campground right next to Swartz Bay, McDonald Campground – Gulf Islands National Park Reserve, and was able to make a reservation over the phone–$27.20 CAD, $13 of which was the reservation fee. Our boat arrived late and we stopped for dinner in Sidney along the way so it was dark when we arrived. The campground has pit toilets and no running water (that I could see during our very short stay), but the location can’t be beat!

I couldn’t reserve a campsite at Ruckle Provincial Park ahead of time. There are only 10 reservable spots and 68 first-come, first-served spots. I called and was told they don’t turn bikes away so even if we couldn’t find a spot, we’d be OK.

UPDATE: We met a couple on bikes on our return ferry who had been turned away! They said there’s a new guy at the park who turns bikes away if it’s full. They found a place to camp in Ganges and paid $24 CAD rather than $20 and had RVs for neighbors.

Check out is at 11:00 a.m., but I wanted to try our luck finding a vacated spot at 8:30 a.m. so we could dump our stuff. Salt Spring is hilly and I wanted to ride to lunch and back without camping gear. We got incredibly lucky and scored an empty site right on the water.

Ruckle is gorgeous. People who arrive by car have to park in a parking lot and then bring their stuff in with wheelbarrows. So the campsite area is free of cars and despite being packed with tents, doesn’t feel overly crowded. A gravel trail runs through the campground and to get to our waterfront site, we had to follow a narrow trail through a couple other sites. I was worried about finding our way if we returned after dark, but it was still light when we got back.

Lunch was in Fernwood, 15.5 miles from Ruckle and our biggest leg on the island. It was hot and hilly, but we made it with some time to spare before noon. I was too tired to do any exploring of the small village, but just beyond Twig & Buoy was the water.

Twig & Buoy is usually just open for dinner, but this day they accommodated our special event and it was terrific. I heard many wonderful stories about my aunt and uncle and shared my own. Some of the old photos on display I hadn’t seen before, but my favorite will always be this one, from a bike tour they took all over Vancouver Island:

Our route to and from Fernwood took us past St. Mary Lake and I wish we’d brought suits for a quick swim after lunch.

Instead we biked straight to Ganges, the biggest village on the island. We had an hour to kill before dinner with my dad so I lazed in Centennial Park while Velotron explored. The Saturday Market had just closed up for the day, but it was still packed in the park and all over the village. Then despite needing to search around for a dinner place with seating, we were done eating and back to Ruckle before the sun was down.

Have I mentioned Salt Spring is hilly? I was exhausted and fell asleep before anyone else in the park. 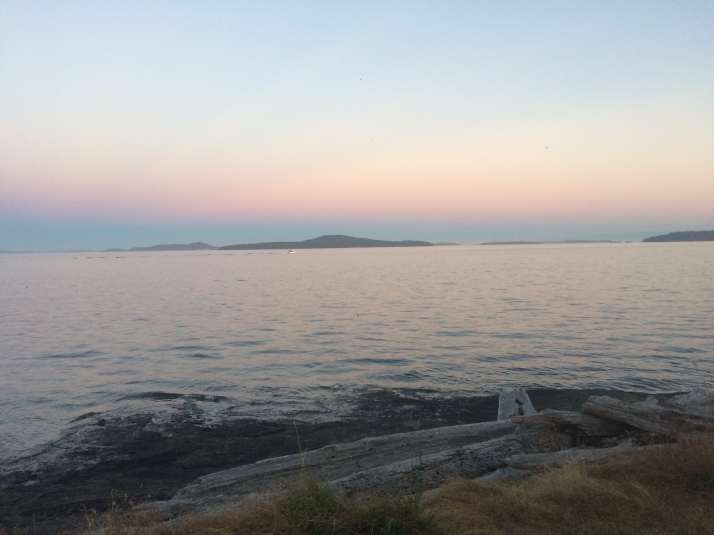 Sunday was structured around us being back to Victoria in time for the 7:00 p.m. ferry. So as not to be rushed, we met my dad for breakfast at Rock Salt by the Fulford Harbour ferry at 10:00 a.m. and took the 11:50 a.m. sailing. We saw so many more bikes getting off and on the ferry as we had the previous morning! And then once we were back on Vancouver Island there were bikes everywhere! We kept crossing paths with the same people as we stopped for water, shade, and blackberries and had progressive conversations. The couple that had been turned away from Ruckle warned me off my plan to swim in Beaver Lake due to E. coli the last few years. And later they recommended our Victoria lunch spot: Tacofino. And we met the sponsors of the drinking fountain at one of the bike rest stations.

We ended up with tons of time in Victoria. So we immediately found ice cream.

And then we found Tacofino. I second my ferry friend’s recommendation. 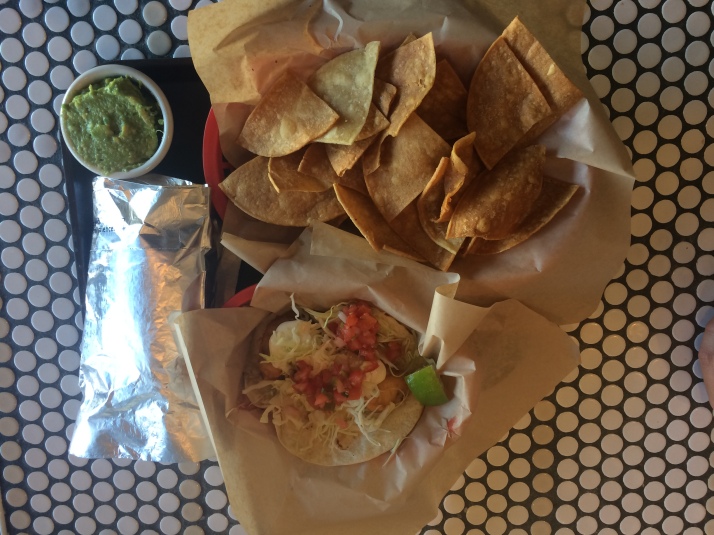 After lunch we found a shady spot near the Clipper terminal and were so early we could watch the Clipper before our Clipper set sail. I don’t think I would have enjoyed rushing to catch that earlier boat and I didn’t have energy to do anything but rest and read, so hanging out in the shade with a view of water taxis, seaplanes, and the MV Coho coming from Port Angeles was just great. However, Victoria is a blast if you’ve got the energy–the kids and I had a terrific time three years ago: Victoria, BC with family bike and saw a lot of Victoria two years ago during our camping trip at Goldstream Provincial Park Campground: Spring Break 2015 Recap.

I’m not sure I’ll visit Salt Spring Island again. It is a beautiful place, but it’s just not the same without my aunt and uncle there now. If you haven’t been yet, though, I highly recommend you check it out. My whirlwind visits were well worth it, but know that one is allowed to camp at Ruckle for up to 14 days. Also, I have a feeling most people bike from Fulford Harbour to Ruckle Provincial Park and then stay put rather than go bike an additional 30+ miles. That seems like it would be pretty nice. 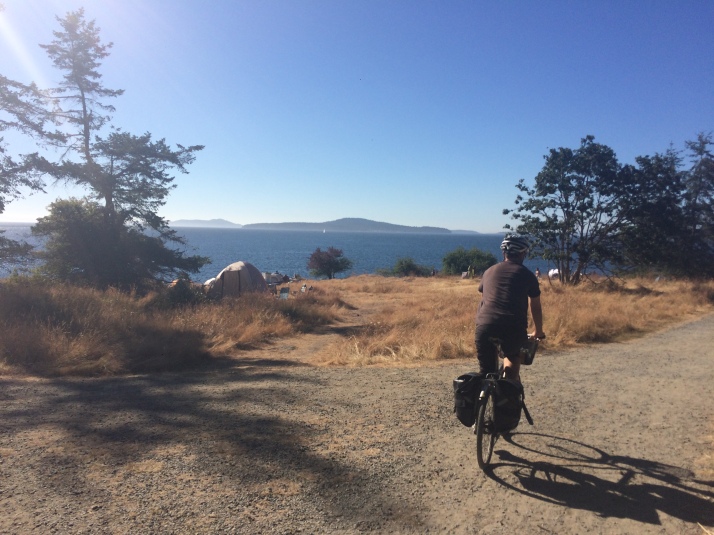 All my schlepping has finally paid off: kid on his own cargo bike! And carrying the dog and the burritos!