The group ride to the ferry met at Ballard Commons Park and headed 7.4 miles (map) through the locks. The kids and I skipped the fun group ride so we could check out the Amtrak traveling Exhibit Train, here Saturday only. En route, we were mistaken for a Seafair Torchlight Parade float as we biked down 4th Avenue…which is the parade route, but this was ten hours before parade time. Obviously, a sign I had overpacked. 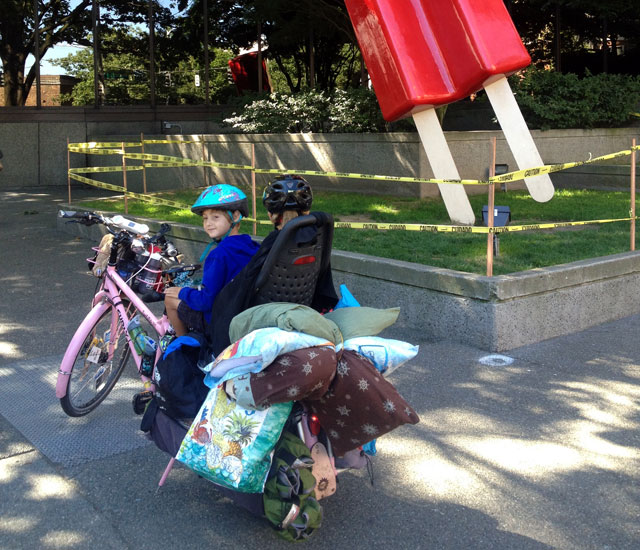 I was sad to miss riding in with our friends, but the Exhibit Train was awesome, even if we only spent five minutes rushing through it.

It was fun wheeling my cargo bike through the Amtrak station. Long bikes aren’t allowed on Amtrak (unless they’re boxed and weigh less than 50 pounds). Many of us hope that rule will change someday, but in the meantime I use the old mamabike for train trips and this is the closest the Big Dummy has been to a train:

…but back to the camping trip!

I love the bike lane for entering the ferry terminal. Cars came from the left to share this toll booth, but it was easy to navigate our way through. We were directed to lane 37 for bikes only. Cars lined up to our left and motorcycles to our right. Several families arrived early and were able to board before cars and the group ride arrived later, with just a few minutes to spare and were stuck on behind the cars. We don’t take the ferry often so I don’t know if it always works this way, but it was amazing how accommodating to bikes they were. 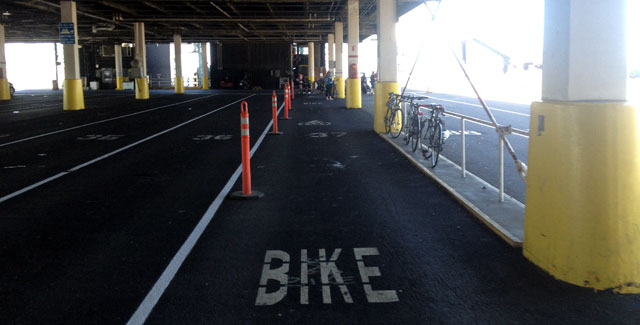 Rather than follow the BIKE ROUTE sign and turn left on Falk, we continued straight through DO NOT ENTER (for cars) sign for a noticeably less steep hill. Yahoo!

At Fay Bainbridge, the kids immediately hit the beach to create a sea life museum 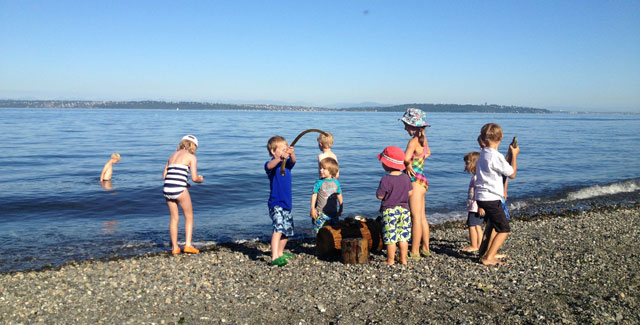 while some of the big people set up camp.

And camp was right next to the beach:

There’s a different hike/bike-in camp area up the hill, but the camp host said we could camp in either area. Someone said our beach area might officially be the kayak-in camp area. We didn’t share space with any kayakers, but there was a quiet couple (who I worried may feel their quiet weekend away disrupted by so many children, but they dinged their bells merrily at us the following day as we crossed paths in Winslow) and a mellow bachelorette party. Camping down here also put us right by the playground.

New at the campground this year was an automated pay station so campers need not have cash on hand. The camp host instructed us to pay $5 per bike rather than $5 per person, resulting in free kids.

We played, dined, and hung out at the campfire. One of my favorite parts of the evening was charging Julian of Totcycle’s iPhone with our snazzy new BioLite CampStove.

I learned a neat trick from Julian in the morning. I asked if our route back to Winslow was less hilly than last year’s and he said, “It’s not bad after that first hill” and then conveniently put some distance between us while riding out so he couldn’t hear me cursing him. Heh. Or maybe it was just my imagination. But he does look a little shadowy and sneaky on the ferry home. In his defense, the hill out of Fay Bainbridge Park is definitely the worst. I had to stop halfway off to eject a passenger and walk the remainder.

Several of us arrived to the ferry home after the initial bike boarding. This time, they stopped the cars after having just filled the bottom level and let us ride up the sides to join our friends at the front of the boat. Again, very accommodating! If only the ferries went everywhere. Mr. Family Ride really would have liked it to deliver it directly to our front door at this point–he took some of my overpacking into the trailer and later discovered the extra stuff had pushed one trailer tire against the body of the trailer. I should have been more sympathetic, but I’m used to extra drag. I also shouldn’t have reminded him I rode Chilly Hilly with my rear brake rubbing this year. Not motivating talk. 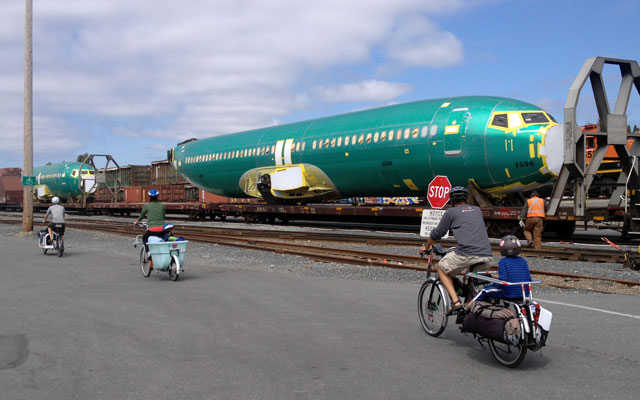 Everyone seemed to have a terrific time and I heard several “Let’s do this again!”s. Just like last year, I was impressed by the eagerness to return to the punishing hills. Now I’m curious if the cheerleaders of last year have made it back to Fay on their own. As for new challenges, several local family bikers have expressed interest in exploring the Iron Horse Trail, but I’m a little leery of carrying even a lighter camping load through gravel…not to mention how to get to the gravel. We biked through the Snoqualmie tunnel a couple years ago and it’s…gravelly. And not all hard-packed gravel.

But I do want a chance to try packing less. I’m not ready to give up my full-sized pillow just yet, but I think I could be convinced to leave the four camp chairs at home. I don’t think the Wheelha.us family was exaggerating when they said their kids wore swim suits for the ride and only brought along a pair of sweatpants each for when it cooled down at night. Now that is packing light! I think I brought six changes of clothing per kid. Plus swimwear. Plus jammies. And way too many stuffed animals. We’ve already discussed NO TOYS for next time.