Yay for adventurous friends! I thought I was adventurous dragging the two-year old on five back-to-back bike errands while the four-year old was in preschool, but when I got Biking with Brad‘s text message inviting us along on a ride through the Snoqualmie Tunnel, I realized just how mundane my “adventure” was. 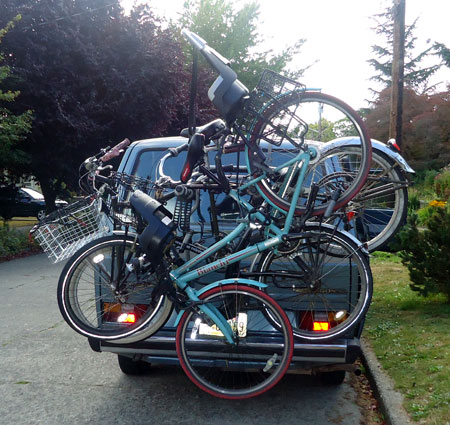 My bike joined Brad’s Xtracycle (with all removable parts removed) and Claire’s very interesting-looking Easy Boarding Biria (assisted with a ingenious top tube adapter…which I read about three months ago on Ding Ding Let’s Ride and was stoked to see in person. I think I need one of these!) on the back of the van. Six bike locks are holding everything mostly stable. We had to add a seventh bike lock halfway there when my bike threatened to jump ship. 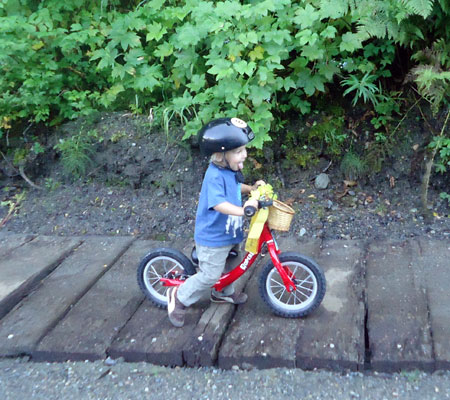 All four kids brought balance bikes, too, which they rode on either side of the tunnel. 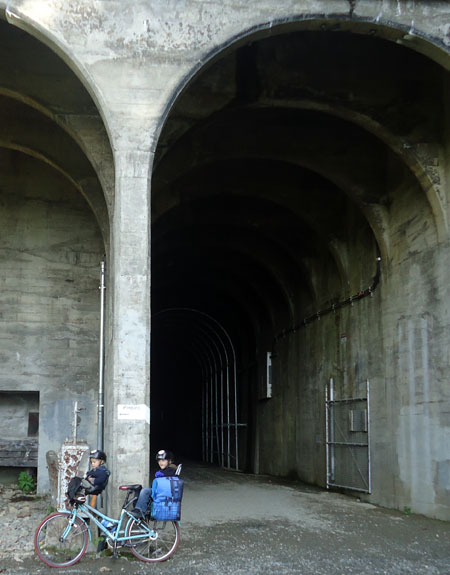 The tunnel itself was exhilarating–by which I mean, terrifying the the first time through and not so bad the way back. One of my morning errands was to pick up new batteries for my Knog Beetle light, but after the tunnel I’ve decided I need more power. Brad and Claire’s dynamo lights and their kids’ flashlights provided ample light for all of us, though. 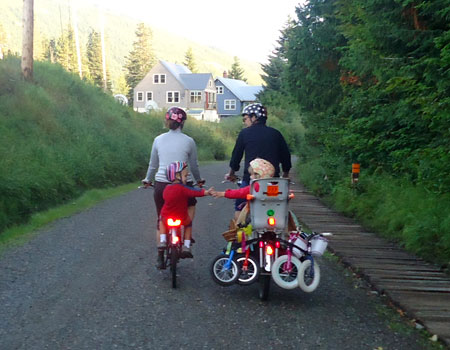 The tunnel is 2.3 miles long of hard-packed gravel and I think it slopes down on either edge. On the far side of the tunnel we spent a lot of time throwing rocks over the cliff, which it turns out is just as much fun as spending lots of time throwing rocks into water. Then we biked an additional mile down the trail to see an old train avalanche structure. My four-year old squeezed onto the back of the Xtracycle so I only had 25 pounds of kids for the slight downhill mile. I think it actually made me a little less sturdy for the patch of loose gravel, but everyone stayed upright.

We met 20-year old, bike-touring Christian coming up the trail on a Montague folding bike who rode back to the parking lot with us. The gravel trek up from North Bend had taken longer than he’d estimated, but I was still incredibly impressed and he seemed to have endless energy to finish. I noticed a poster for the Bus-Up 90 John Wayne Pioneer Trail Shuttle in the parking lot which is probably more my kind of long ride up here.