For the first time in over five years of biking with babies on board, I’ve put my bike saddle at the correct height. (Maybe that first year with the beach cruiser/Bobike Mini doesn’t count…I’m not sure there’s such a thing as a seat too low on a beach cruiser.)

I keep–sorry, kept–my seat low enough to get a foot down to the ground easily. I figured until my aging knees started complaining it was A-OK. I’ve often thought about raising it a teensy bit to see if I felt speedier, but hadn’t gotten around to it. Then I really meant to raise it all the way to optimal height for the Portland DRT since I’d be racing over 30 miles with no kids on board…but I forgot. But that thought planted the seed and a week later, I raised it up up up. Looks like it’s almost a two-inch difference. Whoa.

I feel it’s a luxury to be a woman of average height (5’5″) in the bicycling world–I can easily find a bike frame sized to me, that allows me to lower my seat this much. I have a 16-inch Surly Big Dummy, the smallest one they make. But I’ve read of women five inches shorter than me happy with 18-inch Big Dummies. I was mystified how this could possibly work, but they must do what I’m relearning: if you don’t want to slide forward off your saddle at every stop, you pull up next to the curb:

or lean on something: 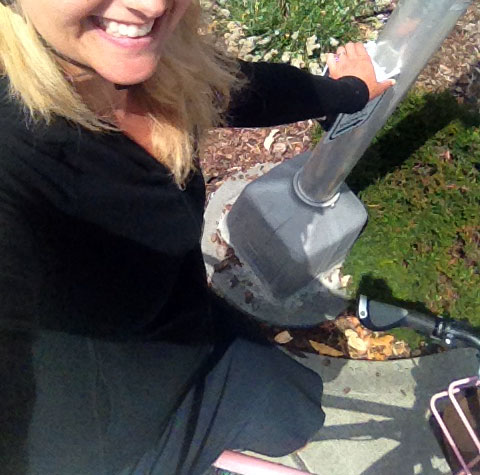 Actually, I can reach my toes down to the ground while in my saddle sometimes (I haven’t figured out why this only feels stable sometimes) so I’ve got four options.

And now I understand why there are riders who are concerned with space to stand between a front kid seat and their saddle. I never had to leave my saddle on the old mamabike. I was surprised to find I fit behind it at 9+ months pregnant, but I never needed to slide forward off my saddle. I think my Bianchi Milano (“old mamabike”) is also the smallest one they make.

I appreciate there are cyclists who refuse to compromise on seat height. Not having an extensive cycling background before getting into it with the kids, I was more concerned with our safety and my laziness (i.e. not wanting to slide off my saddle at every stop), than my comfort.

There’s one more element to successful cycling with one’s seat way too low, in case you’d like to give it a go: you have to pedal with the middle of your foot. The most efficient way to pedal is with the ball of the foot, but sliding your foot forward compensates for the lower seat height. Full disclosure: I didn’t realize I was doing this until the other day. My pedal position is WHACK on the old mamabike. To avoid heel strike with the rear kid’s feet, I slide my feet both forward and to the edges of the pedals. Using the outer edges also means I don’t have to aim my knees out to sides quite as far to avoid hitting the front kid’s seat. So I just figured that bike had trained me to use the middle of my feet on the pedals. Elly Blue recently wrote a How to Bike in High Heels article for Bicycling Magazine to which I wanted to comment online: “Yes, but what about the part where it makes your saddle feel too low?” Now I’m glad I didn’t weigh in (I was turned off by the “This application will be able to post Tweets for you.” Uh, no.) and embarrass myself. Weeks after my aborted article comment (yes, I’m a bit slow to make these connections) I realized wearing shoes with heels forces me to pedal with the balls of my feet, doing away with my seat-height-compensation solution. Aha! It all makes [some] sense now.

But long story short, two days into the higher seat, I haven’t tipped us over and I haven’t gotten annoyed over having to actively keep us upright at each stop. I feel more efficient, but I don’t know if I’m faster. Faster is good because it’s hard to get out the door on time. I think we were a bit faster on the way to Wheelie Fun Camp this morning–we weren’t late–but I’m not organized enough to time myself.

Looking at this selfie I wonder: is the seat too high? It’s going to be hard to lower it now that I’m liking my new-found height. 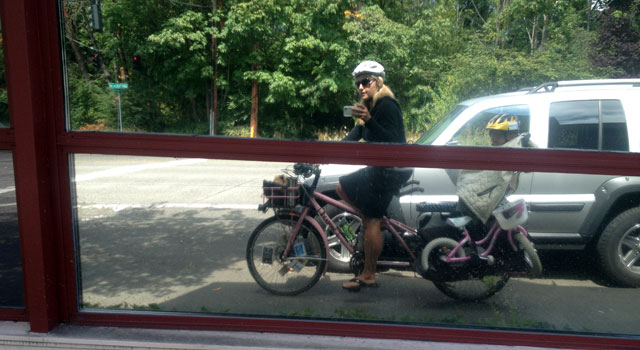 That’s not to say there’s no period of adjustment: my six-year old got stuck up here and needed help down.

But me? I think I’m good! Gimme a few more days of not tipping over before I can speak more confidently about it. Life wasn’t awful before so I don’t wish I’d done it sooner, but I probably should toss on a pair of heels to better appreciate biking in ’em…