Today we started at the 1 Reel Film Festival for the tail end of the Films4Families Animation Showcase during which my son asked “When will we see the bike movie?” over and over until the ALIVE (A Low Impact Vehicle Exploration) shorts started. First up was the Rejuiced Bikes flick which profiled all the exciting bikes at the aLIVe booth. We learned that our beloved water bike is named H2O Flow and the recycling bike we rode yesterday is the Trashy Trike. And one of the bikes did the STP. The Undriving short was great, too, but I would have liked one more profile of a bike-riding undriver. There was a glimpse of the second undriver’s (primarily a bus rider) e-bike, but that was it.

Though there wasn’t a big line when we arrived today, I wanted to try the backside bike parking and entrance anyway. I couldn’t find the bike corral so I locked up to a bus stop and hoped for the best. Once through the gates I realized the idea was to bring the bike in and use the regular racks just inside so I reparked when I had a chance a couple hours later. Now that I’m looking at the map I can see that the bike parking icon is inside the festival boundary. I’m not sure what I’ll do tomorrow. It’s nice to have access to the bike without having to leave and re-enter in case I want to leave extra stuff in the baskets, but the location isn’t quite as convenient.

I stopped to grab a picture of the The Bicycle Doctor mobile bicycle repair, parked on Dexter near John, on the way home. I saw a quick post about it on TUBULOCITY, but this was my first sighting. He was parked there on our way in, too, so I’m not sure this was a long housecall or just a parking spot.

Usually I like an excuse to ride alone and not have to talk nonstop about trains, seaplanes, and puppies, but this evening I felt lonely. Not at first–several hilarious Bumbershoot-goers asked for rides as they were going in and I was riding out. Even though I spent the entire ride reminding myself “The kids aren’t with you–you don’t have to wave at the Ride the Ducks tours” I still waved at the last one I saw. Then I nearly had to walk up the steep block by home so I’m obviously suffering some odd side effects from being tired and dehydrated. Hopefully I can try the ride home solo again tomorrow after sufficient water intake.

Best thing at Bumbershoot day one: the aLIVe H2O bike (and the rest of the fleet) visiting from Portland. Not only do its good looks draw gawking kids and adults over from near and far, it doesn’t just sit passively when parked–it collects rain water into its three tanks. 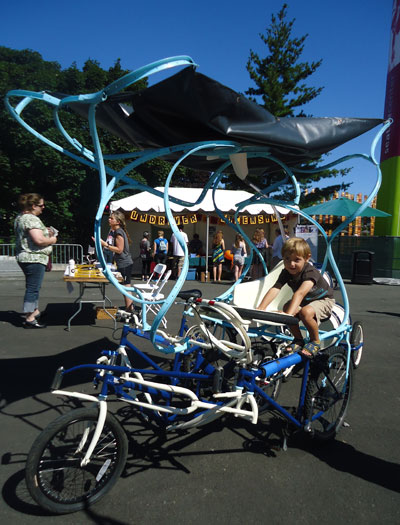 The water bike couldn’t accommodate two littles so we took our test ride on the recycle bike, with the kids sitting in the recycling bay. It only takes two pedalers so I rode pedicab-style while Nat and a ten-year old ferried us around. I kept catching the kid shirking his pedaling duty, but he didn’t want to stop and give me a turn. Not complaining, it’s nice to let someone else do the work, but I wasn’t sure how long my recyclites would last back there and I wanted a go, too.

There’s a collection of short films called ALIVE (A Low Impact Vehicle Exploration) tomorrow I’m hoping we can check out. In the meantime, here’s my video of the funny fleet. Apologies for the musical accompaniment (two-year old clanging stick on metal fence).

Otherwise, Bumbershoot doesn’t seem as bikey this year. The special treatment last year was nice, with the free bag check at the bike corral (although this year there is free bag check for everyone at the State Farm booth) and passes to a Very Important Biker booth with free bike-blender-made smoothies. This year things started out on a low note when I discovered the bike corral was a swampy mess. The map shows a second bike parking area on Mercer steet so I’ll give that a try tomorrow. Plus, the Mercer Street entrance should be much faster. And hopefully its exit will have a ramp for the stroller. 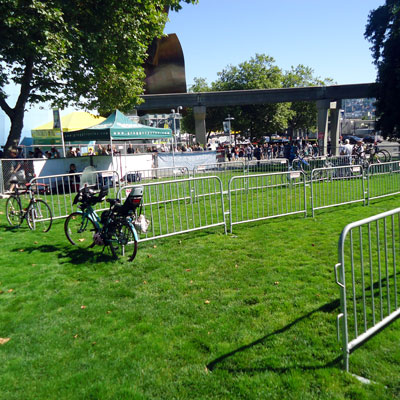 The kids were also intrigued by the Medic One bikes by the first aid station. I’ve never seen them before, but the paramedic said they’re also used at sporting events. 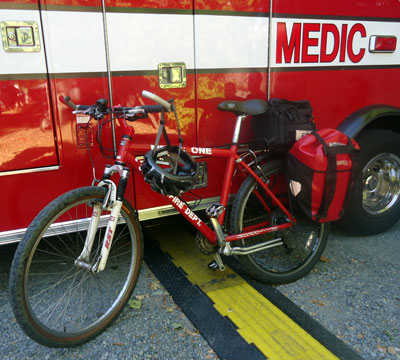 I was impressed by how much stuff they hold…though I will point out that the stickers the paramedic gave us came from the ambulance, not the bike. I can appreciate trying to keep the load light. Speaking of a light load, the only thing we missed today was a picnic blanket. I didn’t end up using the Ergo, but I’m glad I had it along and will bring it tomorrow, too. The kids mostly walked, but I used the little stroller to carry our bag of snacks and kid swim stuff so happy to have had it along. Yes: swim stuff. Most of our Bumbershoot was spent in the Youngershoot Kids’ Zone playing with the Children’s Museum Legos and swimming in DuPen Fountain. Kids don’t seem to appreciate the fact that they can do that stuff any old day and should let their mom hang out and watch music at Bumbershoot. 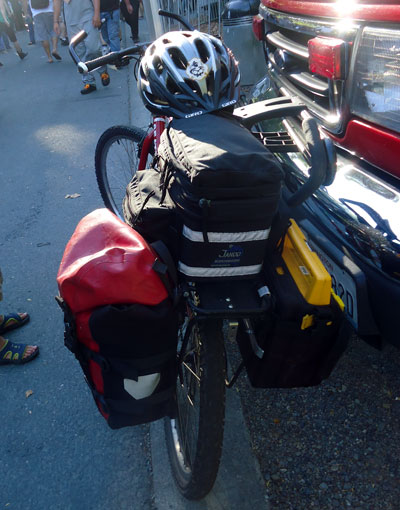 Bumbershoot was so fun yesterday that the boys and I went back today and bought a ticket at the door. I rode the blender bike in the VIB booth in case I didn’t get a chance to ride for real later, but now I feel bad for having given myself that out…because I didn’t ride my bike later. The blender bike was really hard! A passerby told me Baby Rijder looked like he was having a blast on my back, but it doesn’t really show in the picture she took.

We also spent a lot of time at the Cyclecide stuff and saw their performance this time. It was pretty crazy and every time someone crashed they all froze and yelled, “Is the bike OK?” No bikes were hurt in the performance, fortunately. I spoke cargo bikes with one of the performers and she told me about her Yuba which sounds just as cool as Xtracycle. I think I have a couple years to procrastinate on it before I upgrade to one or the other.

Back to the Seattle Center today for Bumbershoot. I thought we wouldn’t have to worry about rain today, but it started drizzling as soon as we stepped out the door so we quickly shoved rain gear in with all our other junk. Thankfully the rain stopped after a few minutes and I’m glad I got my first [partial] rain ride under my belt this month. And thank goodness for the free bike gear storage provided by Clif Bar. We completely overpacked (extra kid outfits, swim suits, rain gear, toys, snacks, water, stroller, extra Ergo) knowing we could leave our crap safely behind and get to it if needed.

The VIB (Very Important Biker) section was great. Cyclists received free coffee, water, water bottles, cookies, Clif Bars, and could make smoothies with the blender bike. Our other favorite area was the Cyclecide heavy pedal bike rodeo stuff. Turns out the kids love tall bikes. And anyone could take a spin (“Fun first, safety third”) on the show bikes. I wasn’t about to try a tall bike, but I test drove the broom bike. It had a little propane tank attached to the frame so I think it might even shoot flames or sparks during the show.

We took Dexter home again. Dan thought the grade towards downtown was easier than Stone Way, my old nemesis. I’m not so sure about that, but I can always give it a try and turn back if it doesn’t work out. Speaking of Stone, that hill just gets harder every time. Granted, I had all that extra gear in the trailer today. By the time I finally reached the top Dan turned to me and said, “Does that thing have a triple crank on it? Oh, you do have a granny. Hmm. Well, I was thinking of getting you one if you didn’t already have it.” Harrumph. I knew we should have filled his messenger bag with bricks to slow him down a bit.