I miss the good old days of three on a bike. I’ve pretty much given up on my quest to carry two bigger kids on a regular bike so our monthly (or more often) trips to our orthodontist 20 miles away have meant using two bikes: five-year old in the Bobike Maxi rear seat on my Bianchi Milano city bike and the seven-year old on his own bike.

I like the bus OK, but we don’t use it often enough that I’m adept at it. I have yet to embrace the idea of transferring between buses as a good way to get around, so when we were all on the one bike I’d take us downtown and just ride the 554 to Issaquah. I don’t consider Seattle’s downtown streets friendly enough for my seven-year old to ride on his own so we catch a bus somewhat near home and transfer to the 554. Our varying appointment times and my inability to memorize a good bus combination means it’s a little different each time. Today we started with a 0.4-mile ride to catch the 73 Express which was a first so I didn’t realize we’d be getting off in the transit tunnel.

But we fit fine in both of the elevators to get up to street level. I knew we would, having shared an elevator with Julian of Totcycle, his Xtracycle, and his two kids two years ago. Look at all that room! I could fit 20 camera-shy five-year olds in there!

But while we rode the elevator and walked our bikes one block down the steep hill for the second bus, I wondered if things would have been easier without the bikes. Back when legs were littler, walking 0.4 miles to the bus stop would have been a hassle, but we can totally do that now! Of course I have absolutely no idea how long that would take. Please tell me if you have any idea how long walking specific distances with a five-year old takes. Factoring in sibling tussles on a once-per-block basis.

A bike-free trip might require one more bus: the free 200 to bring us 1.5 miles from the Issaquah Transit Center to our dentist. Or maybe we could walk 0.8 miles from the downtown Issaquah stop.

As I locked our bikes together on the walkway outside the dentist (there’s no bike rack in the whole strip mall), I thought this was also something I wouldn’t miss if we left the bikes behind.

Normally our bike route doesn’t take us along Front Street since the streets are a bit too busy for a kid on a bike and the sidewalks are narrow so I don’t like taking up space on the bikes…so popping into Bicycle Center of Issaquah would be better served by visiting on foot. But our friend Kent Peterson wasn’t in and Dillon the little dog was off camping (poor Dillon! He must be freezing!) so we just banged on a couple floor-model bikes and posed by the penny farthing outside.

As we finished lunch at the Issaquah Brewery, which is conveniently close to the downtown bus stop, I realized my five-year old had left his elephant stuffed animal at the dentist, 0.9 miles away. Thank goodness for the bikes!

The Issaquah Trail system features wider-than-normal sidewalks that allowed us to ride most of the way on trails…just 115 feet of Gilman Avenue on the sidewalk rather than bike lane on super-busy street. Rainier Boulevard just reopened from a long repaving (or something) project so it wasn’t this pleasant our last handful of visits.

Here’s a better picture of the wide “trail” sidewalk. With a bit of bike dancing, note the foot in the air. 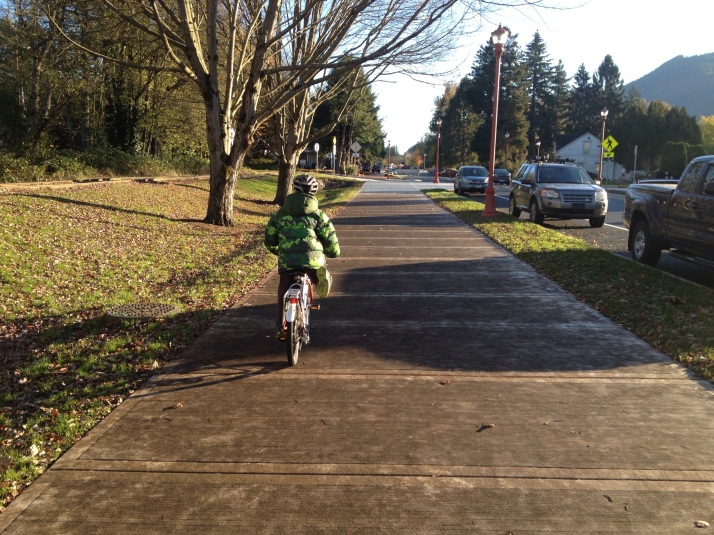 Great sunlight and shadows today, by the way!

The bikes also made it easier to watch the salmon in the Issaquah Creek. I didn’t see any, but the kids claim they did. We stopped by the fish hatchery next to the brewery (walking our bikes) to check in on the baby salmon so luckily my day wasn’t salmon-free. 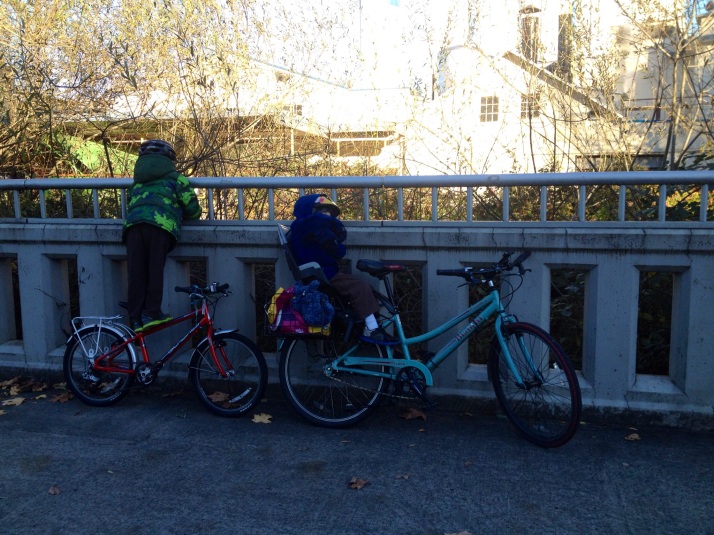 Coming home we only had a block and a half between buses so we walked our bikes again. I should have chosen a better connection in the transit tunnel, but it just seemed too complicated with the bikes (I choose bus connections the night before an appointment and don’t like changing things on the fly unless forced to), so we had a nice long wait for the 26 that takes us just two blocks from home. The five-year old and I walked, the seven-year old rode his bike those two blocks. 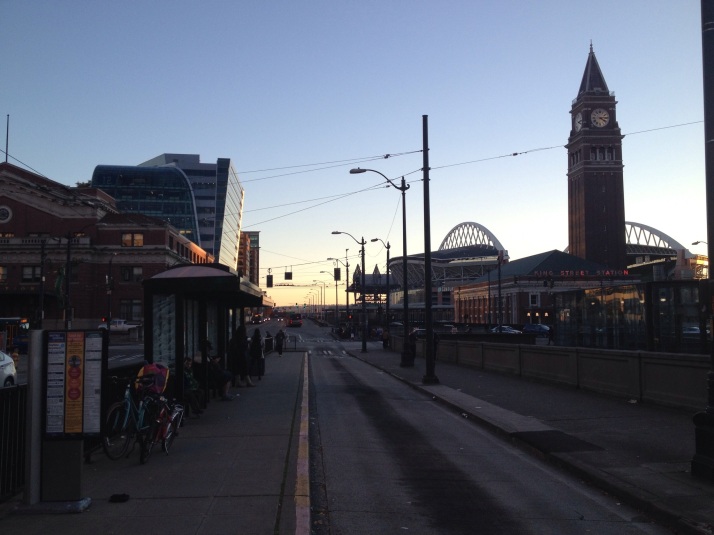 So I’m not sure what we’ll do next time, but I’ve got six weeks to figure it out. However, I do know that for my next cleaning in a couple months, I’ll go alone while the kids are in school and ride my bike the whole way. I can’t wait! And I can guarantee neither visit will include stuffed animal tag-alongs.