I’m going to declare the current incarnation of The Old Mamabike (Bianchi Milano with Bobike Mini and Bobike Maxi) officially outgrown. Here we are six months ago, living the multi-modal high life: 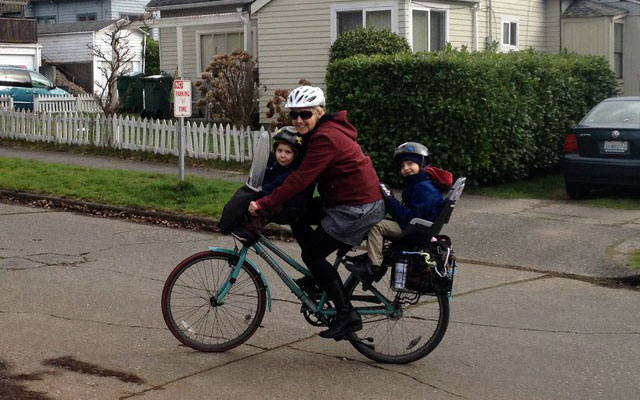 The weight limit of the Bobike Mini front seat is 33 pounds and my four-year old is a little bit heavier than that fully clothed. And there’s a comfort issue. Little kids fit great in front, but I’ve replaced my stem twice to accommodate longer legs (each kid hit a point where his knees bumped against the handlebars uncomfortably) and my extended reach has me leaning forward into the kid helmet a bit. This wasn’t such a big deal with the Nutcase in the photo above (note: helmets with rounded backs, like Nutcase and Bern, are most comfortable both in trailers and if you have a kid rammed against your chest), but his pointy-backed Giro pokes me in the sternum. If he wasn’t over the weight limit, it’d be worth looking into more swept-back handlebars. It’s fascinating how replacing small pieces can totally change a bike.

Removing the seat (and windscreen) is easy–just pull out a pin and yank it out of the bracket thingy. I haven’t removed the mounting bracket yet–I’m not sure which kind of stem I have (though I suspect it’s the easier one)–so I guess I’m not fully committed to a change yet.

I started phase one of old mamabike conversion the other day by removing the front seat and windscreen…though it was really just so I could bring them to the Wheelha.us house and see if they’ll fit on a Madsen bucket bike for another family biker who is looking into front seats. It looks like it’ll fit! 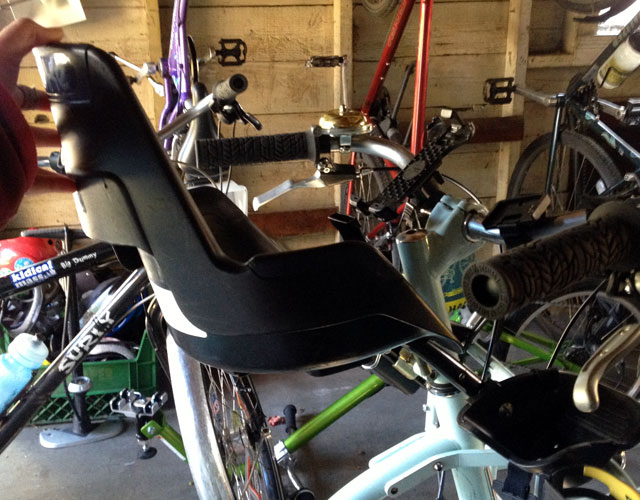 I want to get the bracket off so we can really test it, though. And in the commitment department, I left my front seat and windscreen in the Wheelha.us garage so I’m motivated to move on my next steps. And also because we don’t have a garage or much storage space. It’s not the first thing I’ve snuck into there, hee hee.

Another comfort item with the old mamabike is the seat height. We had a good five-year run with the low seat, but ever since I raised the Big Dummy’s saddle, I don’t find the old mamabike as comfortable. Now that there’s no front seat and I can slide safely off my saddle if need be, I’ve raised it up to proper height–looks like an inch and a half or so: 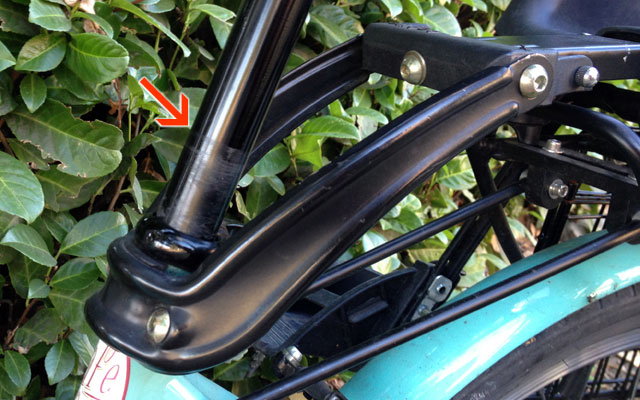 I still have some heel strike in the back, but now that I’m using it for the four-year old, rather than the six-year old, I think I can raise the foot rests up. Or I could hide his favorite yellow shoes that are three sizes too big. So here’s the current look. It’s so odd to see it unencumbered by front seat. I always stare open-mouthed at people who ride by on Milanos with no kid seats and whisper, “The future!” I imagine this as my around-town bike someday (unless you’re in contact with my husband, whom I’ve promised I’ll sell the Milano when we get a used tandem to attach kidback and Burley Piccolo as one of our other next steps). 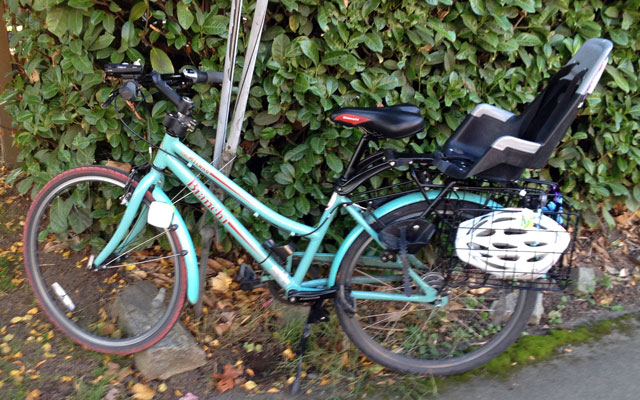 Why bother with the next step for the old mamabike? Because I like having a bus-able, two-kid-carrying bike. So what to do? One option might be a different front seat, many of which are highlighted in Hum of the City’s A front child seat for older kids. I saw one recently at the Ballard Bikes to School Kick-Off Event. It’s mounted on the seat post, but it’s really a front seat. 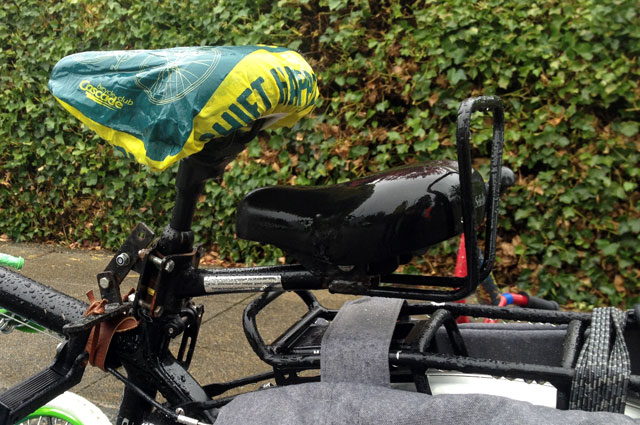 And soon to the market is the Mac Ride front seat. It launched a Kickstarter campaign yesterday and I’m really tempted to get one while they’re cheap.

Though with any front seat I’ll most likely have to move my seat back down, though maybe not the full inch and a half. A lower profile seat will be more comfortable with a bigger kid–and I won’t have to keep my feet at the edges of the pedals and aim my knees out to the sides. And it will keep the old mamabike the same size for busing.

My original idea for the old mamabike, long before the idea of upgrading to a cargo bike, was to move the little kid to the rear seat and put the big kid on his own bike, attached behind with a FollowMe Tandem coupling system–now available locally at G & O Family Cyclery. In an interesting parallel, my friend who previously rode a Kona MinUte midtail cargo bike with her son, has just upgraded to a new regular bike with FollowMe Tandem. Note the bikes are connected at the hubs so it’s nice and stable–and doesn’t interfere with the part of the bike where a rear kid seat would sit. 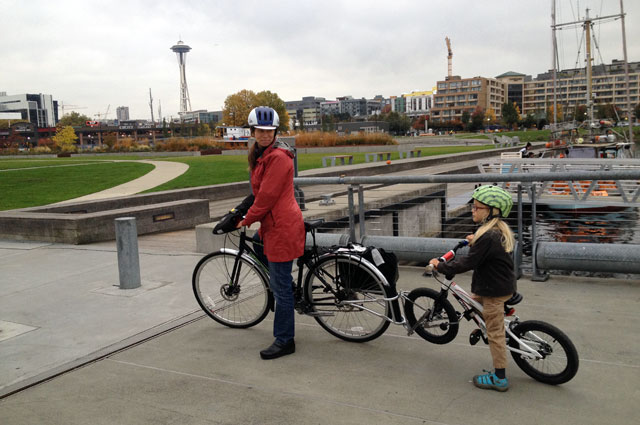 But do I really want to lug around our heavy Danish Mosquito? The above photo is a week out of date–the trailing kid just upgraded, too, to an Isla Bike. I’m eager to get some feedback about the FollowMe with both the heavy and light kid bikes on our hilly terrain.

The not-so-simple parts are that I’ll need two open slots on the bus bike rack…though we usually travel at non-peak times and get the three-bike rack all to ourselves. And I’m not sure how long it takes to uncouple the kid bike. I’m not very adept at showing up to a bus stop with lots of time to spare.

If you’ve been reading closely, you might suspect there’s a Kona MinUte that will soon need a new home. Now that could work! Holds two kids and fits on the bus! But even if Kona hadn’t discontinued the MinUte, it’s not fair to use such a cool bike as a backup bike. Not to mention that during the sole two-mile ride we took on a MinUte, the kids were happy as clams for the first mile and then pummeled each other nonstop for the second. Although…they happily rode a horse together at a birthday party this summer which momentarily made me think they’re ready to share a small cargo bike deck. 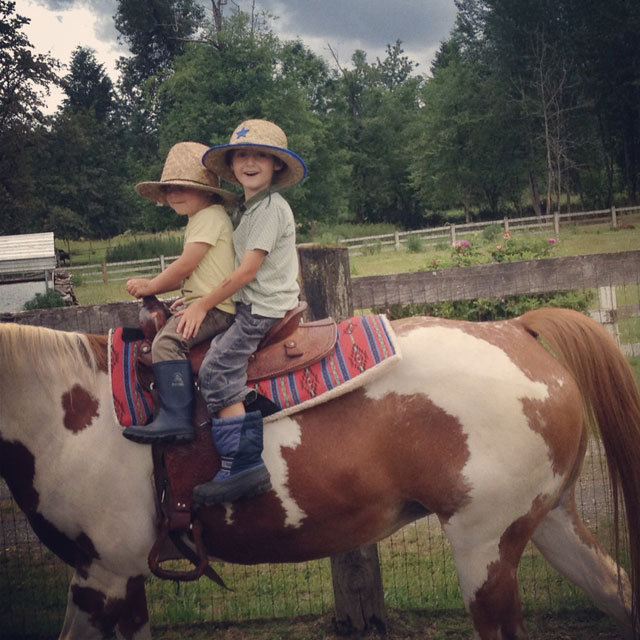 Until five minutes later when they couldn’t share a tractor. 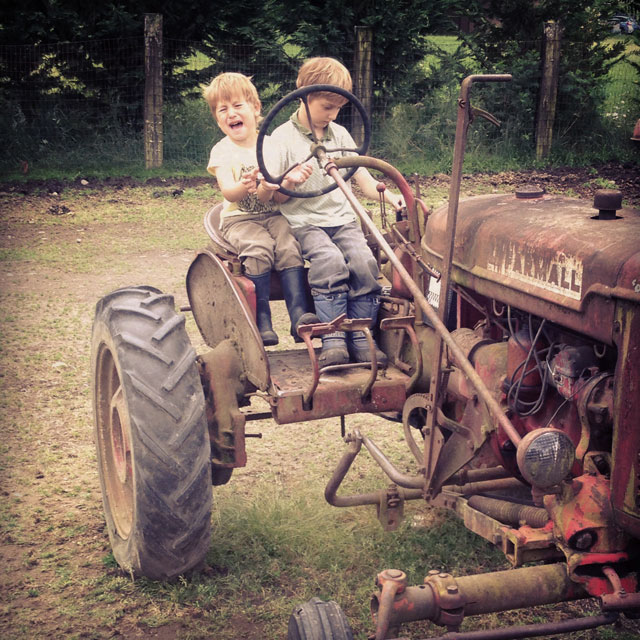 So what should I do? I’m going to ride the old mamabike around a bit to make sure I still love it as much as always (I’m pretty sure I do). It won’t work for the two-kid morning school run right now, but I can easily do preschool pickups and use it on non-preschool Thursdays and Fridays as long as I don’t want to carry anything big and impressive. If you’re so inclined, please weigh in because I’m awfully indecisive.

If money were no object, it’d sure be nice to get:

12 thoughts on “Carrying two bigger kids on a regular bike”