Today is moving day in which I disappoint my biking peers and reveal that professional movers put most of our stuff in a gas-guzzling truck and drove it around the corner to our new house. The kids and I cleared out for the day so Mr. Family Ride could deal with the moving stuff.

Our first stop was the library to return some soon-to-be-due books rather than risk them getting lost in the moving shuffle. Remember, I went out in Snowmageddon to avoid accruing more overdue fines. Must return the books!

Then we headed to Top Ten Toys for a birthday present. They’re moving in two days–and also around the corner! We scouted the new location, sure that it meant more bike parking (currently I park on the narrow sidewalk, bike locked to itself) since it’s by the newer Piper Village Shopping Center area, but for all the loveliness of the brick walkways and benches, there is one tiny bike rack at either end of the block. Kind of surprising. But in better news, on the way over I got to use this great loop detector (place wheel on icon to trigger light) on Greenwood at 85th. I love that it’s right in the middle of the lane! They’re usually very far over to one edge and put you uncomfortably close to neighboring (or oncoming) cars. I hate the one on Latona at 45th in Wallingford. It’s on the far left of the left lane of this one way street, but on the other side of the intersection cars are parked along the left so it’d be ideal to be on the right side. The street is slightly uphill so cars always catch up and pin me to the left for a while. No fun.

Then we wiled away the afternoon at a birthday party, including awesome face painting. But moving day is not the best day for face painting. Especially if one is moving to a house with no bath tub and hasn’t yet procured the “I’ll take showers if I can wear a snorkel mask” snorkel mask and extra especially if the face paint doesn’t seem to really be face paint and won’t scrub off. Yellow eyebrows all week! 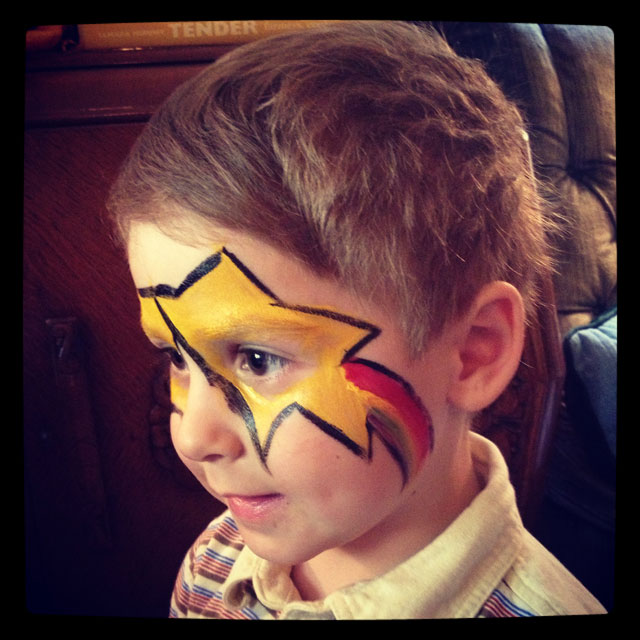 Also at the party I got to see my friend’s “kitchen bike.” When she told me about it, I thought she was talking about some obscure German brand of bike so I nodded like I knew what she meant. Turns out it’s literally an old Schwinn on an indoor trainer in the kitchen. She’s car-free and her regular ride is a Dutch bike with two kid seats. Training on the kitchen bike has made her faster on the heavy bike.

While we were indoors a hail storm pelted the city. It looked liked it had snowed when we got outside. Fortunately it wasn’t slippery to bike on.

I left my snowboard jacket outside on the bike so it was damp and wouldn’t have been comfortable over my three-year old’s pants, but I also didn’t want to stop our progress out (chocolate cake sugar high! all kids berserk! hit the road!) to dig out his Newt Suit and put it on him, so I used my rain chaps on him and they were great! The waist buckle fit around the back of his seat and the knee velcro around his ankles. And yes, unfortunately the snowboard jacket is necessary to keep him from [lovingly] strangling his brother. 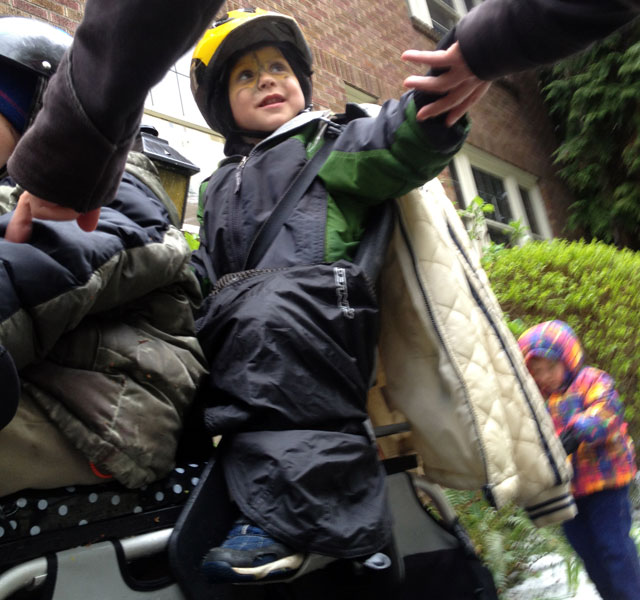