Today we used the old mamabike so we could use the bus to pay visits to the doctor, chiropractor, and dentist with the slide-damaged kid. I wasn’t tempted to use the car, both because I’d love to go the whole 30 Days of Biking car-free, but also because going multimodal made a day of boring appointments an adventure whereas the car would have made for a nightmare of a day. And I figured if we’d gone the car route, I would have waited at home until all three offices opened to call and set up appointments and have to miss the whole day of school so the bike/bus didn’t put us behind in that respect. The fact that the offices had staggered openings made the whole thing seem more feasible–doctor at 9, chiropractor at 10, and dentist at 11.

First up: 1-mile bike ride to doctor’s office. I intended to go to the coffee shop across the street from the doctor before 9 so we could hang out and call right at 9 and hopefully get in. But we ran a bit late (surprise, surprise) and got there at 9:08 and were able to accost our doctor as she got out of her car. We were in luck and got in right away. Nothing injured, apply more arnica.

The chiropractor wasn’t open by the time we left the doctor’s office so we biked 2.5 miles to a bus stop in the University District and I called to make an appointment while we waited for the bus to arrive and bring us up up uphill. They had room for us at 11:45, but we headed straight over at 11 anyway so the kids could play in the Chiroland playroom. While we were there I called the dentist and said we could get there at 2, which worked great for their 2:15 appointment. Phew! Looks OK, apply more arnica, come back next week.

I started getting a little antsy when the clock crept past 11:45; I wanted to catch a 12:17 bus 10 blocks away to connect to a 1:12 bus downtown. Amazingly, we got to the bus just as it was readying to pull away–success! 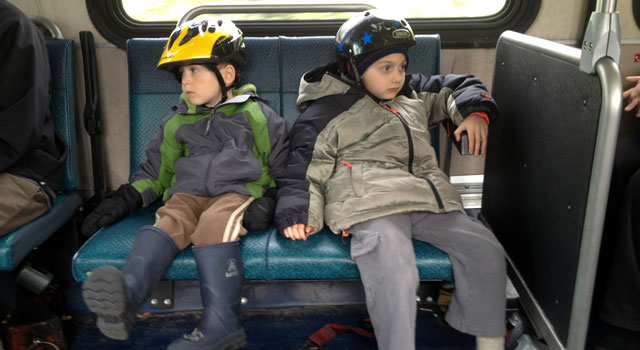 On the bus I realized our stop would be in a transit tunnel, which means two elevators to get up to ground level and then figure out which direction to go to get to the connecting bus. Suddenly the “Walk to 2nd Ave & Seneca St/About 2 mins (7 mins to make transfer)” didn’t seem like enough. And it wasn’t! I could see the bus across the street from a red light. Never have I been so impatient for a light to turn! A pedestrian ran through the red light and flagged the driver down and was allowed on even though it had pulled away from the curb. Meanwhile the light finally changed so I rode up alongside and asked if we could please get on board. He shook his head, but said we could try to catch him at the next stop. [Note to self: make notes of subsequent bus stops for future missed buses.] I asked him where that was (please don’t be uphill, please don’t be uphill!) and chased him 5 blocks to Cherry Street. We even saw a friend along the way (Hi, Cathy!). And then we got on that bus. 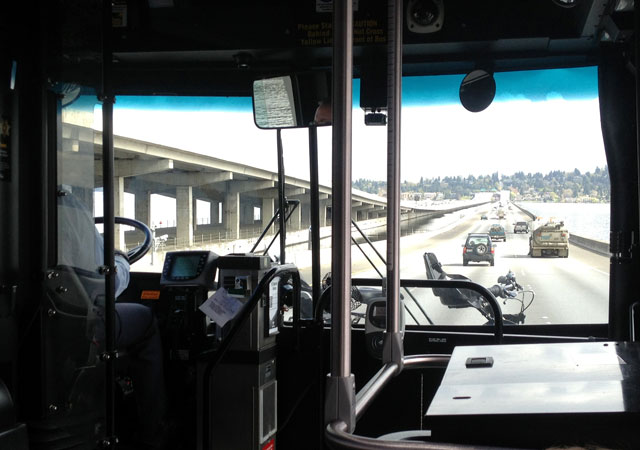 And this is why we don’t use the bus regularly! It’s so hard to work with a set schedule, especially when I have two small stubborn, barking children to tow along. And to board each bus the same process: remove kids, remove bags, remove windscreen, fold up baskets, buckle seat straps, find ORCA card.

This bus meant a change from King County Metro buses to a Sound Transit bus to reach the east side. The kids loved the Bikes + Sound Transit poster on board. I was confused by the cat, but pets and muscles sell.

Everything went fine at the dentist, too. Broken off spacer was put back on and we stayed in Issaquah for late lunch/early dinner. I fed the kids snacks at bus stops, but I neglected to eat all day. Rushing around from appointment to appointment doesn’t leave much time for meals. Oops.

I love riding around Issaquah. We generally get off the bus downtown and ride by the train museum to get to the dentist, but on the way back head for the transit center for a more rural excursion. Here’s a Canada Goose we honked at. It’s right next to the busy Trader Joe’s, but at the right angle it feels like one is out in the countryside.

My bike leaned precariously on the bus rack home from Issaquah, but it flexed its massive biceps, thought of its loving cat at home, and hung on for the 20-mile trip home.

As you can guess, our three-part excursion took all day and we rode home with the 5:30 commute crowd. Here are 12 bicyclists in front of us en route to the paint-separated Dexter bike lane. These folks are always a serious bunch and I only got one, “That quite a load you’ve got there!”

One last shot: we stopped halfway up the hill home to admire our favorite garden (the kids’ because of the water-spitting frog statues and plastic alligators and mine because it’s halfway up the hill and therefore a great spot to rest). I couldn’t shake any cherry blossoms loose from the tree today, but soon. And notice the front kid’s new Giro Rascal helmet protrudes a lot in the back. We’re a little more cramped on the small mamabike now.