This is my new, heavier cargo: we’ve traded the balance bike for a 12-inch pedal bike.

My five-year old isn’t 100% after yesterday’s slide mishap, but he was up to coming along to see his little brother learn to ride a pedal bike at Cascade Bicycle Club’s Learn 2 Ride for All Ages. Actually, he thought he was teaching the class, so of course he came! It was very impressive that everyone showed up given the downpour. And several more kids showed up after I took this picture. 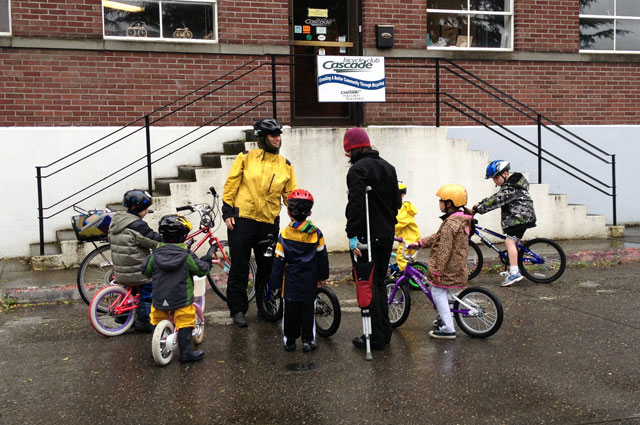 And it worked! It was so fun to watch the ecstatic kids conquer bicycling. My ringer did figure eights in a huge puddle while his lil bro joined the ranks of pedal-powered people. Then he coaxed a new-pedaling little girl (who’d never been on any sort of bike, just a scooter!) to join him in the puddle. I guess that was his contribution to the course. The class will meet again June 2nd and September 8th ($10)–sign up! I suggested they do it EVERY SINGLE WEEKEND because it really was that fun. Imagine how much fun it would be not in freezing rain.

The only thing that made me nervous was how close my two kept coming to the curb. I told them the story of how I broke my arm when my pedal hit a curb in college (and on the last day of Bicycle Safety Awareness Week!), but my five-year old replied, “That’s OK. I’ve been trained to do this.” Oh, my bad.

After class, we checked out the brand new NE 65th Street cycle track. As I biked us to the top of the hill, we passed the Mayor heading down. We called hello to one another and he said, “You dig?” I think I responded favorably enough that he’ll push for many more miles of cycle tracks.

I didn’t think the new pedaler was cycle track ready, but I let my five-year old loose on it. He did great going downhill, but could only make it part way back up once the incline got too tough.

Here’s a view from the top of the hill. The cutest part is the half-scale stop sign.

I had hoped the cycle track completion meant the bottom of the hill would be easy to navigate, too, but it’s still being worked on. There’s a wonderful closed road that runs parallel to the sidewalk, but it’s not easy to enter from the corner. I’m not sure what the intended bike route is, but it doesn’t seem to be my route of choice.

A bit past the cycle track, we saw a kid bike–16-incher, I think–sporting ape hanger handlebars and an incredibly long seat post, making it adult-friendly. We were all intrigued and the kids began discussing the tandem tallbike they’ll build together from baby bike frames. Freak bikes have a special place in my heart so this made me very happy.

I’d forgotten my keys at home so we stopped at Counterbalance Bicycles to pick up baby’s first lock, a yellow Knog Party Frank so I could borrow it while we had lunch. (Psst…it’s actually orange, but please don’t tell him. Apparently they always sell out of purple and yellow first due to their proximity to the university–school colors.)

And then we arrived home to find my keys in the garage. They must have been there overnight. Oops. But really, I can’t believe this hasn’t happened sooner.