Since we couldn’t show up to the Wooden Boat Festival until after the ships were done blowing their noon-time horns (“Too loud!”), we started our big day out at Nord Alley in Pioneer Square for the Allez Alley! Tour de France viewing. It was great! There was coffee and baguettes, stickers and bike maps, and le Tour playing on a big screen. It’s every weekday, but if you need help choosing a day, go Thursday–there will be prizes! Here are the details:

Street photographer Constance Brinkley was on hand and took some marvelous shots of the event, many of which feature my little guys shoving baguettes in their mouths. 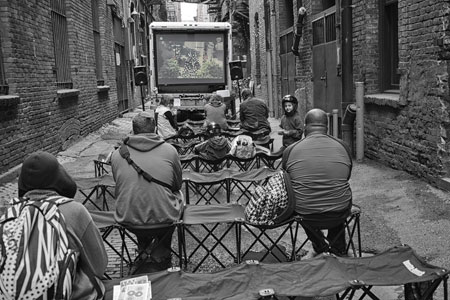 Then we went on a bit of tour of our own. Maybe the Tour cyclists would consider it a flat stage, like what the encountered in France today, but I found it quite hilly. Pioneer Square is already quite a haul from home and while Lake Union Park is only 2.5 miles back towards home, I usually end up on the sidewalk of 2nd when heading north from Pioneer Square because everything else looks too steep. It was quite useful being in an alley behind the Bicycle Alliance of Washington–they said, “Can you make it up Western? Why not take that?” What a great idea! Apparently I can only think of Western in terms of riding to Pike Place Market.

We never made it to the big wooden boats–the boat-building tent was just too fun and we barely made it out to set them afloat in the model boat pond. I was happy that the spray park was turned off for the festival, but we saw two kids take unintentional dips in the model boat pond so not everyone stayed high and dry.

The next leg of our grand tour was to Wedgwood for a chiropractor appointment. I’ve only previously gone by old mamabike and bus–where the bus does all the hill work–or car, but I figured since I’d made it to Lake City a month ago, Wedgwood could only be easier. Ha! Going north on 35th Ave NE from Meadowbrook Pond is much easier than going south. I had to stop for short rests twice on the way up. A roadie biked by during my second break so I shouted “Allez! Allez!” to him and he acknowledged that it’s quite a hill. Nice to know that it wasn’t just me. As we headed home, I saw a second roadie on the hill and he’d half unzipped his jersey, having overheated. Given the time of day, I had assumed they were both commuters, biking home in full bike gear, but considering they weren’t carrying bags, perhaps they were just out for rides in search of big hills.

I don’t trust the Veloroutes hill calculator–I think it makes an average of the grades along a hill, but by selecting the right block I can calculate a 12.4 % grade. Ouch.

I’ll poke around, but I don’t think there’s a flatter route. I’m feeling a bit torn about this. I love Dr. Gita and she’s the best in the biz for pregnant women and babies. Am I lazy for wondering if I shouldn’t find a closer chiropractor now that the kids are bigger and I’m smaller (as in, not pregnant)?

This wasn’t part of our tour, but this morning we took a new combination rig out for a test ride: road bike + new-to-us Craigslist trail-a-bike + double trailer. The idea is that it’ll get the five-year old pedaling a real bike sooner since he’s not eager to give up his balance bike and while he loves riding bikes with training wheels around the REI show floor, we haven’t taken much time to try out the 16″ pedal bike in our garage (which doesn’t have training wheels). He’s dubbed this contraption Engine Engine Engine, though I would have gone for Engine Engine Caboose. It was fun for ten blocks, but we’ll take it to the beach tomorrow to see how we like it for ten miles.

9 thoughts on “Allez Alley! and a Tour de Seattle”