Did you know that many local bike races include a kiddie lap? And they’re free! We had a great time at the Recycled Cycles Brad Lewis Memorial Criterium kiddie lap last year so I couldn’t wait to sic the boys on the course again today.

Like last year, it was rainy and cold, so the kids wore their rain gear and gloves…but the other racers looked ready to brave the elements. There was a nice showing of kids (I count 14 in my picture, but there may have been a few more that snuck in before the word “Go!”) and I think there would have been many more had the weather been better. 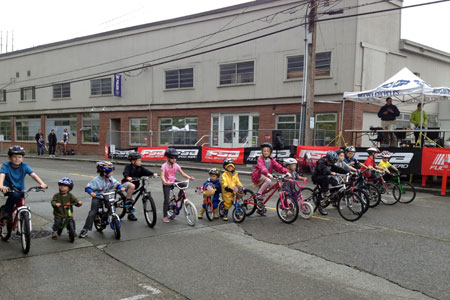 I had hoped both kiddos would make it around the course now that the toddler is over his freeze-upon-eye-contact-with-strangers phase, but he apparently had a flashback to last year and ran off course and didn’t want back on. Perhaps he’s just better suited to cyclocross–he sure liked that.

There were lots of grownups racing, too. We watched the Cat 4 men compete while eating lunch. They’re fast! I don’t know a lot about crits, but I know that a prime (preem) is a prize awarded to a racer who finishes a specific lap first. I know this because Mr. Family Ride won a used car in a crit in the Midwest (Wisconsin, maybe?) which allowed him to move to San Diego where we later met. So yay for criteriums and primes! But kids, stay in college that last month–the car will keep until you get your degree. Then pack up your bikes and move to warmer pastures.

We live less than a mile from Recycled Cycles (though I have to study a map to find my way there because I get lost that easily) so I didn’t pack the boys back on the mamabike for the ride home. This was Mr. Family Ride’s first time riding with the children. I wish they’d behaved a little more predictably unpredictably (you know what I mean, right?) so he could see what I’ve had to experience, but they trailed after him like baby ducklings.

They opted to take the stairs and runnel up the first of the hills while I took the long way around. I put the five-year old and his bike on the Big Dummy for the steepest block home, but he got back off for the last two blocks. Next year: everyone pedals and lugs themselves the whole way home…or so I hope.

This morning I decided I need a trailer bike (a half bike that attaches to the back of an adult bike that the child pedals). Recycled Cycles only had new ones and the other Recycled Cycles only had a pricey Burley Piccolo. Now if I were recommending a trailer bike, I’d say only get the super stable Burley Piccolo. It comes with a special rack that it connects to and is much more stable than the cheaper ones that connect to the seat post. I’ve seen many trailing kids riding an awkward angles which can’t be comfortable for them or the parent. I’ve also long had my eye on the FollowMe Tandem Coupling which attaches a kid bike down at the hub level, making it one of the few systems that will work with a rear seat. However, I’ve heard Clever Cycles hasn’t had them in stock for a while. And they’re heavy. Not that I’m afraid of heavy as it’s all I know. But I’ve got a plan. I’m going to stabilize the trailer bike with the trailer (a solution I first saw at Moving Planet last year) so the cheaper the better. Seattle has a great Craigslist–I scored a used Adams Trail-a-Bike very close to home.

En route to the trail-a-bike, we had our first ride on the repaved and repainted Ravenna Boulevard. I’m confused by the helmet-less bike lane icons. The bike path by the Olympic Sculpture Park has no helmet, but I figured that was an old one. There seem to be two varieties of helmeted bike lane guys–the head with regular helmet, and the one that looks like that plastic thingy that comes in your bag of Ikea hardware that hides the screw on the side of your bookcase. I can only assume SDOT accidentally used the wrong stencil.

The seller had two trail-a-bikes, one folding and one non-, both of them blue. I initially figured we’d go for the one the five-year old deemed “more blue” since I don’t think in terms of carting things around by car these days. Who needs folding if it’s just going to live in the garage and out on the road? But just because the Big Dummy can’t go in the car, doesn’t mean the trail-a-bike won’t someday do so. Its current task is to get the preschooler comfortable pedaling in small doses and hopefully onto a pedal bike soon, but it could probably fit in the trunk of the car with the folded up trailer and the road bike on the rack. And perhaps some day down the road it will connect to a tandem bike with Kid-Back cranks and we all pedal!

The folding model was less blue, but the real problem was that the non-folding model had a sweet parrot horn on the handlebars. The sellers generously moved the parrot from one bike to the other and the folding model was ours! The kid is most excited about the horn, naturally. I’m glad I got a folding one because the thing is huge! It was hard to get in the FreeLoader folded in half; I’m not sure how I would have carried an unfolded one.

Fortunately, we’d also stopped by Ride Bicycles to see if my Xtracycle Utility Belts were in. They were! So now I can easily buckle my middle buckle through the hole in the Yepp seat. There’s a lot of extra belt, but I can’t bring myself to trim it down just yet. I imagine I’ll eventually buy six (or maybe eight if I trim these two down) to carry big exciting loads, but for now I’m just sticking with two to make loading regular-sized loads easier. There are currently four more belts at the shop if you’re in need–$10 a piece. 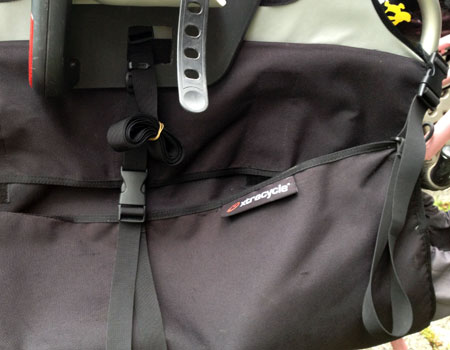