Today was Engine Engine Engine’s first big ride. The trail-a-bike is a bit big for our five-year old–the handlebars are too high and the seat doesn’t go low enough–but he loves it! The trailer is a double so he could always squeeze in with is little brother if he wanted to take a break.

We decided ahead of time that we’d make a couple “station stops” on the way to Golden Gardens beach to make sure he didn’t get too tired–first at the Google steps on the ship canal and then at the Ballard Locks.

We were running half an hour late and I didn’t want to miss the super-low tide, so we (I) decided we’d skip the first station stop. It was a little windy when we left home, but very windy by the time we got to our second station stop, so we ended up skipping the final station, too. Sandy beach plus wind does not a fun day make. But the Ballard Locks were great! It’s peak sockeye salmon migration season so the fish ladder was full of fish. Our last few visits have been in the off-season and we’d been lucky to see a lone steelhead. 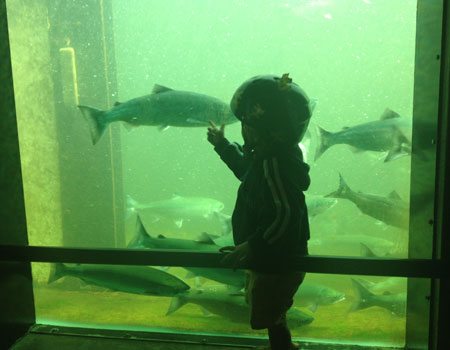 There were a couple moments of sunshine so their boys and their friends traipsed around the grounds and rolled down the grassy slopes for quite a while, but eventually the rain came and we took shelter across the street at Red Mill’s Totem House. The rain got progressively heavier and our friends eventually ran to their car and drove home while we waited for a break. I saw a few glimpses of blue sky and the rain slightly varied its ferociousness, but it never let up. The forecast promised a dry day with clouds and never acknowledged the rain, no matter how many times I pulled out my phone to check for updates. Summer in Seattle typically starts on July 5th so I don’t know why I was surprised. I worried that the middle engineer would change his opinion of Engine Engine Engine if he had to ride in the rain, but the kids were getting cabin fever so we braved it. We were almost appropriately clad: I was in rain jacket and shorts, the five-year old was in full rain suit and sandals, and the two-year old was snug in the trailer.

There was no complaining of cold hands or toes so Engine Engine Engine is still a hit. There wasn’t a lot of pedaling, either, but it’s just the first day out so I’m not too disappointed about that. I can tell when he pedals because the bike gets jerky. I think this will get smoother as he gets more used to pedaling and isn’t necessarily a result of the seat being too high. Engine Engine Engine isn’t as easy to haul around as the Big Dummy, but it’s not as bad as I thought it would be. I wouldn’t feel comfortable with clipless pedals with my Big Dummy or city bike with two kid seats, but since that’s what I’m familiar with on my road bike, I feel OK cleated to Engine Engine Engine. And that trail-a-bike is heavy so I need the extra pull they provide. I felt very cautious about the length of the rig so I stuck to the street along the whole Missing Link section whereas I normally would have used the sidewalk.

The rain finally stopped as we left Ballard so we swung through Gas Works Park instead of heading straight home. I didn’t mind the thought of resting before hitting the hill home…but then I hauled us up kite hill in a foolish move. But we made it to the top! My legs were not happy about it, but the kids played around while I rested. Last year we came here on July 3rd, too, and it’s fun to watch the set up for 4th of July.

I made it home without having to stop, too, but it wasn’t under normal circumstances so I’m not sure next time will be as easy. The two-year old needed a bathroom and the hundreds of portapotties were not yet open for business, but the park bathrooms had been locked up in preparation for tomorrow’s big rowdy crowd. So I was extremely motivated to get home as quickly as possible. Engine Engine Engine won’t be our everyday ride–and it’s probably not good for my little light road bike to pull so much weight–but we’ll take it out occasionally for some extra pedling action.

I carefully tucked my right pant leg into my boot only to be reminded that tandems are abnormal.