This morning I set out to see if I could find a more family-friendly route to Pike Place Market. My guys won’t be pedaling separately (or pedaling at all, it seems) any time soon, but I’ve been thinking about kid-friendly routes a lot lately and many of our destinations don’t qualify. Today’s route was twice as long as cutting through South Lake Union, but mostly on separated bike trails: Burke-Gilman Trail to Ship Canal Trail to Elliott Bay Trail (and then Western Ave, but we’ll get to that later). The trails were quite empty, I suspect because everyone had headed down to Seward Park for this year’s first Bicycle Sunday. 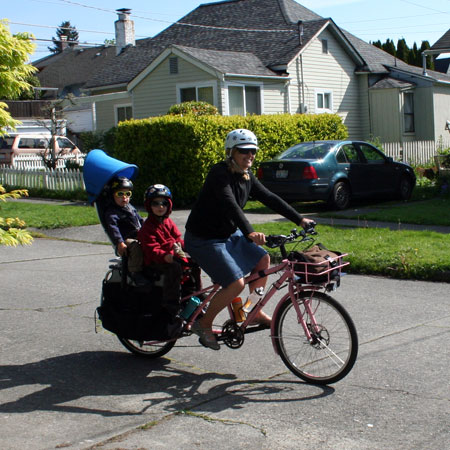 We rode out in style today–me in a skirt and the big kid on a new seat pad. The denim skirt worked fine and was heavy enough to stay put, though I noticed it obstructed my view of my chain rings. I’m was going to pretend I have to look down to see which gear I’m in because I carry such vastly differing amounts of weight on my bike and can’t feel which ring my chain is on. But really, I just can’t tell and I like to look down and see if I’m already in my granny. The seat pad is a work in progress: it’s an Ikea Cilla chair pad folded in half and tied down with an inner tube. It’s not waterproof so I don’t want to attach it too permanently, but I’d like to make it a little snugger for use on good-weather days.

I discovered a new bike trail at Fishermen’s Terminal. It travels along the west parking lot and took us a bit out of the way, but I couldn’t help but follow it to the end. I’ll try the dirt path on the left side of the picture next time to connect to 21st Avenue a little sooner since today we ended up on Commodore Way. Both less steep than dealing with the hill of Emerson Place, but I’m partial to the shorter detour.

The waterfront’s a bit of a pain with the shifting construction, but today the Waterfront Trail was operational south to University Street, which was where I wanted to cut left to Western Avenue anyway.

I first rode Western when I followed a pedicab (one of the few non-electric-assisted ones) up from the Aquarium last summer. It’s not too steep, but it’s not a quiet street and the bike lane is strewn with gravel. I didn’t think to check out the state of the sidewalk so I’ll have to come back and see if that makes it qualify as not terrifying to think about kid riders. We stopped to check out a pig sculpture on the way up (and so I could rest a tad).

Passing under Pike Street, it was nice to look up a flight of stairs at the big Pike Place Market sign to appreciate the four-block steady climb that made this route possible. 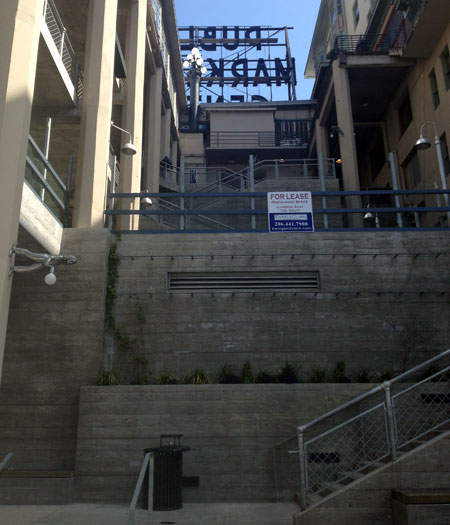 We hung out at Victor Steinbrueck Park for a bit before braving the madness of the market. The husband of a family biking friend (regular bike + iBert + double trailer) throws fish (that may not be his official job title) so we said hi and talked about his bike route of choice, which involves the Aurora Bridge. I’m not sure I’ll give it a try, but I can certainly appreciate avoiding the downhill then uphill by staying flat.

But there’s more! Our purpose of heading downtown was for the Bus Sightseeing and Steam Plant Tour. The bus trip down to the plant was slow and scenic, on the 60 over Beacon Hill. The view was great, but I thought to myself, “I will never ever ride my bike up here!”

At the plant, we were just hoping to hear the word train mentioned a few times on the tour so imagine our surprise when we came face-to-face with a model stream train outside.

The kids weren’t impressed, but I was taken with the 1910 Otis elevator salvaged from Union Station when it switched from train station to office space.

The tour regrouped at All City Coffee where I realized Georgetown is where the hippest bikes in town come. Numerous fixies rode by outside and we marveled at a golden Dead Baby Bikes trike and this tandem bike converted into a single rider super comfort cruiser. What a great idea!