I wanted to do something epic for the last day of 30 Days of Biking, but the forecast called for all-day rain. And it’s Monday. Not to create an excuse, but in thinking about it, I realized that biking everywhere really makes each day epic. The bike adds a sense of adventure to every trip–especially long trips, but even just the two-mile run to preschool.

I also noted that just 15 miles would put me over 350 miles for the month. That would be pretty epic, even if we didn’t travel somewhere new in achieving it. Just the fact that I’ve gotten to the point where not only does a 15-mile day sound possible, but not epic, is amazing. But I settled on just doing a bunch of fun little things.

After dropping the big kid at preschool (where we were not the only biking family–a classmate rode all the way from home on his 16″ bike while his mom took his baby brother in an iBert front seat on her mountain bike) we went to Short Stop Coffee. I haven’t been before, but have wanted to go to see the small Henry paintings. There wasn’t a good bike parking spot I could see, but no one was going to use the porch in this weather so I stuck my bike there.

The place is covered in Henry and other murals and the coffee and food is good. I think we’ll be back in the summer for sandwiches and [dairy-free!] smoothies. I had their signature drink, the Rico Mocha: Mexican Ibarra and Ghirardelli chocolate with cayenne pepper and cinnamon. The bathroom had the best murals. The toddler thinks skulls are owls (his fave) so he was quite taken by the mermaid with starfish covering her boobs holding a skull in each hand. Here are some G-rated starfish:

Then we stopped at Fred Meyer for more bungee cords and zip ties. I wanted a bungee net after reading how awesome they are on Hum of the City, but the smallest they had was four feet by three feet (which Mr. Family Ride just pointed out would be great for behind-the-seat loads so I think I’ll go back for it). I think I’ll need to find a shop that doesn’t keep their zip ties and bungee cords/nets in the automotive section if I want to find a front-rack-sized one.

Next up I rode to the top of kite hill at Gas Works Park. I took the gentle back route since I’m too long to manage the hair pin turns on the front. I also took the gentle route down because the toddler was adamant I not ride straight down the grassy slope. Even without the exciting descent, it felt pretty epic to climb that tiny peak. 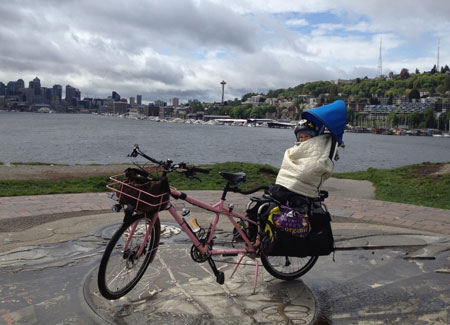 Then we paused at the fish-shaped bike corral outside Essential Baking Company. The owner of the bike on the crosswalk sign was locking up as we arrived so I hollered to him, “Hey, why aren’t you parking on the fish? I was hoping I’d have a neighbor!” I think I scared him because he scurried into the bakery. Perhaps he didn’t realize it’s a bike rack. He knows now.

Then a look at the bike tree on Densmore. Our current arguments on the way home are over which route to take. The big kid likes Meridian (“Colored houses!”), but the little kid prefers “Bike tree! Bike tree!” 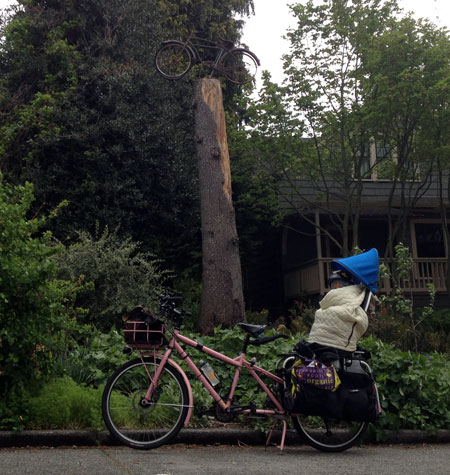 And our final fun little thing was a detour an extra block north to follow the Neighborhood Greenway home. I was hoping to discover the sharrows on my street, but they still stop a block shy. It’s just a matter of time, though.

After preschool pickup, we headed back to Gas Works Park so we could all ride up the big hill. The two-year old decided he wanted to ride on the mamabike halfway up and rather than reload the FreeLoader with his bike, I draped it over the stoker handlebars.

It slid off the bars on the way up, but stayed on the bike OK without scratching the paint so we all made it up without incident.

A group of tourists had me take a photo of them so I had them take one of us. The toddler couldn’t take his eyes off a passing tugboat, but two of us flashed our victory smiles. 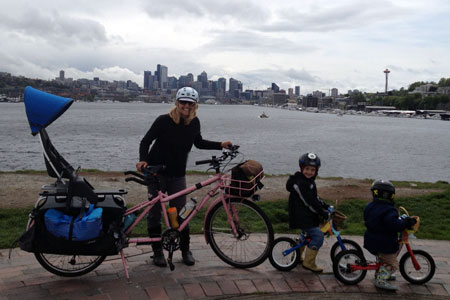 We tooled around the park for a while and picnicked by the sand pit while the wind whipping around us. It was a great day for kite flying, but not such a great day for biking.

Inspired by our bike commuting preschool friend, I left the kids on their respective balance bikes as we headed for home. We took the sidewalk instead of the Burke-Gilman Trail since there are so many full-speed bikes heading in both directions. They didn’t make it all the way–not even all the flat section–but it was still pretty exciting.

This evening I realized I was only 1.2 miles from hitting 350 miles for the month. I thought about heading out solo after the kids were asleep, but dismissed the idea as silly. But those kinds of rides are totally in the spirit of 30 Days of Biking. Even if it’s in the driveway in one’s pajamas at 11:59pm, it counts. And what better way to end my month than with a just-get-it-done 1.2 miles. I tried to sneak in an errand and rode to Kinkos to print Critical Lass posters, but it turns out I had the wrong version on my flash drive so it ended up being a event-free ride after all.

I’m know I’m not the only person saying this tonight: I’ll miss you, 30 Days of Biking!