I played car this morning and utilized the curb-side pickup at preschool. I’ve seen it done for sleeping baby siblings before and figured it was a service my bikey family would never need, but the little guy got stomach buggy yesterday and isn’t quite 24 hours in the clear. I didn’t want to bring him inside and possibly expose the other kids so the teacher came out to fetch the big guy. 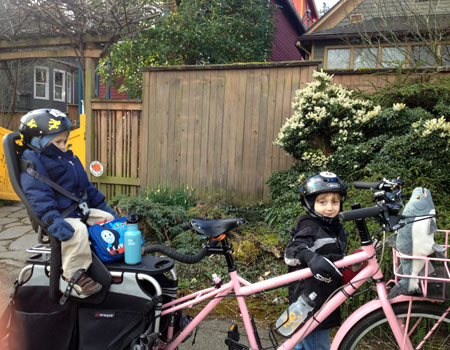 A quick trip to the grocery store was safe, so we paid a visit to PCC on the way back home. It’s hard to do a small shopping trip with so much cargo room, but PCC makes it easier when those five items total $40. 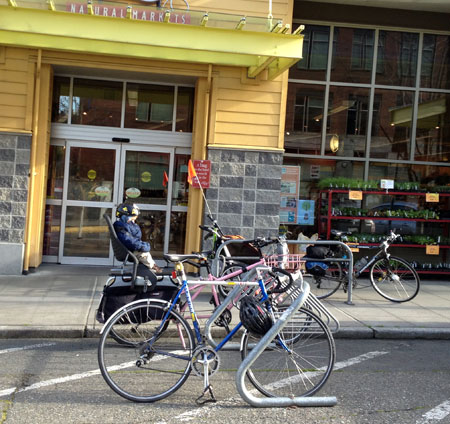 I’d like to point out that this is the same bike rack Seattle Bike Blog tweeted a picture of yesterday: 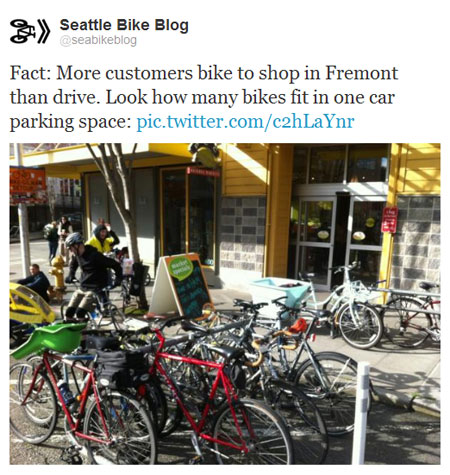 It’s not quite as packed when it’s not farmers market day. But it’s a great rack–I love on-street parking. The bike in the background today is pulling a trailer with a balance bike in the rear cargo slot.

Back home, we swapped to the old mamabike and headed to Dutch Bike Co for a new center stand. I’ve gone through two Pletscher two-leg kickstands so far. They’re great little kickstands and I love how they fold up to the side, but I’m just asking too much of them. I tried a Velo Orange Dual Leg Kickstand a while back, but it didn’t do the trick so I returned it the same day. It hasn’t been too bad with no kickstand in the interim. I started on this bike with the stock single kickstand and am used to leaning it against my hip while loading the kids. I also utilize trees and fences to balance it. 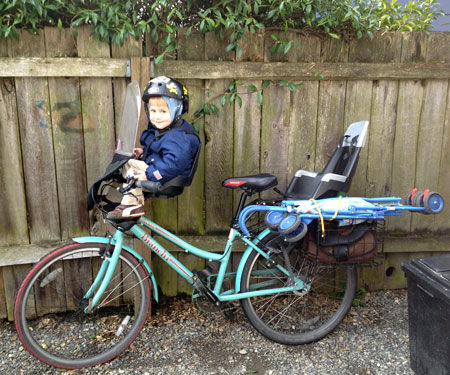 Today I had a hebie bipod stand 605 installed per Dutch Bike Co’s recommendation. It’s the same one that comes on the WorkCycles they carry. This thing is going to last! 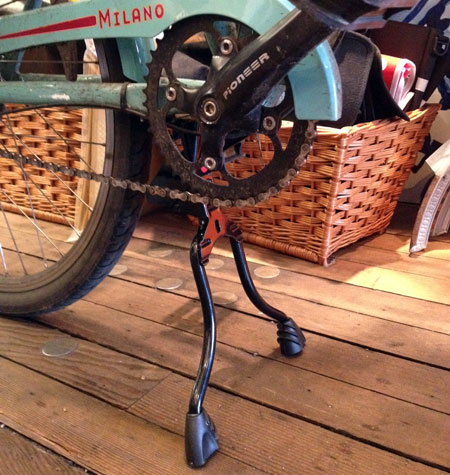 I thought I’d drop it off today, take the bus home, and then pick it up tomorrow or Wednesday (thus the stroller bungeed to the basket), but apparently when the owner of the shop says there’s room to keep your bike overnight, one should still check with the mechanic. Fortunately, by the time the little guy had finished his banana from the cafe, Fritz had made time to stick on the new hardware.

This was my first trip on the Burke-Gilman Trail since Hum of the City and I were detoured for the bollard removal. Now there are strips of fresh black asphalt and those of us with wide loads don’t need to worry about getting hung up. 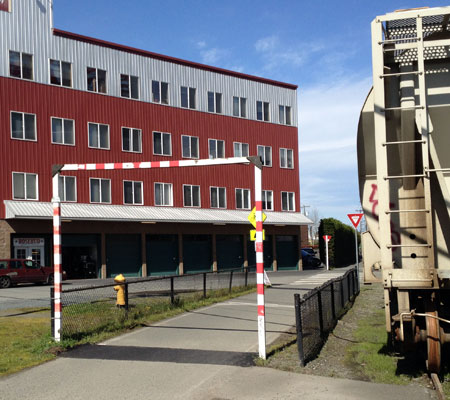 There was time to go home and swap back to the new mamabike so we grabbed it, the balance bikes, and some snacks before heading back to preschool. 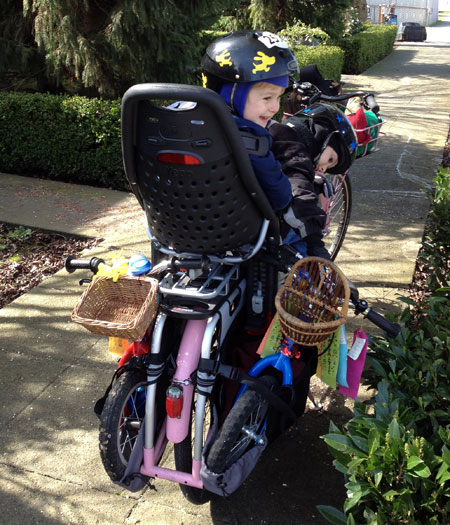 My plan was to let the kids ride ride ride at Gas Works Park so they’d be sufficiently tired that I could go to the Menstrual Monday ladies ride. We were only there for about half an hour when the stomach bug hit the other kid. I guess I should have seen that coming. We headed home and stayed indoors and amazingly, the toddler still fell asleep at six. Yeehaw! 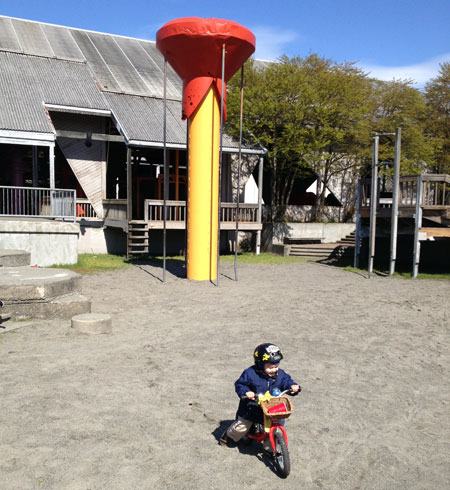 I met up with Tracey of RAW between our two houses and we headed to the Seattle Center together. She still had her baby-towing trailer (empty, that is) attached to her road bike and I had opted to take the Surly Big Dummy mamabike. I removed the kid seat and took the balance bikes out of the FreeLoaders so I was relatively light and aerodynamic. It’s a good night bike because the dynamo lights are BRIGHT, plus I wanted to show off the awesome Bike Brightz from Hum of the City. [Note: No hostess gift required or expected if you come visit, but this pink Bike Brightz is awwwwwwwesome!] 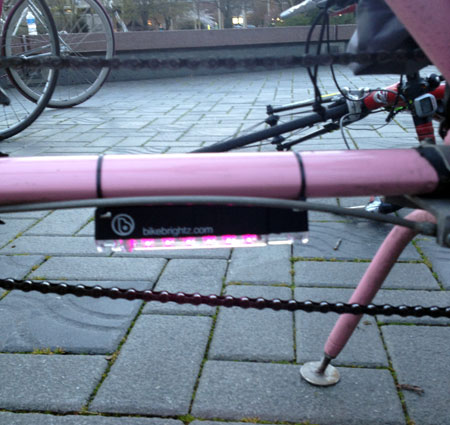 The only tricky thing about the Menstrual Monday rides is that one doesn’t know the destination ahead of time. I told Mr. Family Ride I’d be home at 9, but we rode to The Bridge in West Seattle. Perhaps I could have made my self-imposed curfew if I’d skipped the patio time, but Tracey and I stayed for one drink before leaving early. I was home at 10:30. I think the other 13 riders stayed a lot longer and didn’t get to their respective homes until Menstrual Tuesday. 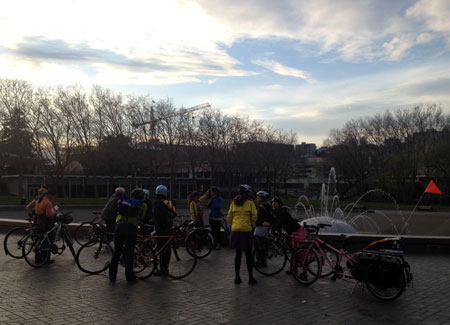 It was nice having the bright lights (and the Bike Brightz got a couple raves), but next time I’m bringing my road bike. Even an empty Big Dummy is a lot to lug around for 20 miles. I’ve ridden down the Avalon hill once with West Seattle Spokespeople (I took the bus to get to the ride), but this was my first time up it. It’s big.