A big crowd braved the cold weather for today’s Kidical Mass to check out the newly completed Ship Canal Trail and after-party at the Fremont Brewing Urban Beer Garden. Today was also Cranksgiving, which we enjoyed participating in last year and were sad to miss, but we couldn’t miss a Kidical Mass! Not to mention KM was closer to home, less hilly, and ended in a brewery rather than outside in the cold.

The ride was big fun, with more family bikes than I could count, including four Madsens, a couple bakfietsen, an Xtracycle or two, trail-a-bikes, kid seats, and trailers. I think the most impressive (though we’re all impressive) was Babette with her Madsen containing two kids towing a trailer containing two bikes. Her husband wasn’t empty handed, either, pulling a trailer containing their puppy–their 65-pound puppy. We weren’t able to discover if an extra-long bike plus trailer can negotiate the walkways over the locks because a family with an unencumbered bike showed up and took charge of her trailer.

Speaking of the Hiram M. Chittenden Locks, the big one was empty. Not a common occurrence, but apparently it’s been closed since the 8th. We haven’t been down this way as often with the colder, shorter days. I detected an awful, fishy smell as we neared the water and figured a stinky fishing boat was passing through, but the stench was coming from the dry lock. The kids didn’t mind the smell and found the empty lock fascinating. Another discovery I made today is that the bathrooms on the south side of the locks (by the fish ladder) are not big enough to easily accommodate a bike, one of my favorite things about the north bathrooms. But all little bladders in distress squeezed in and we were soon on our way to the Ship Canal Trail ribbon cutting.

Our Kidical Mass ride, a couple Spokespeople rides, and countless other cyclists showed up for ribbon cutting ceremony. The kids were all very patient through several speeches and we soon got to ride on the new path. I’ll have to ride it on my own from the other direction to really get a feel for it.

The new path is so efficient, we arrived in Fremont 20 minutes before the brewery opened. Everyone scattered to pick up lunch at various places and we spent our extra time at the new Milstead & Co coffee shop. Our friends who led us to the new cafe hung out in the garden, but we needed to thaw out indoors. I’m grateful there was no snow as originally predicted, but it was plenty cold enough.

Despite the cold, my Seattle-born child refused to don his jacket, balaclava, and mittens for the ride home (though he agreed to keep his hands warm under his stuffed salmon), but my desert baby’s ears were cold even with his extra layers and I had to wrap my sweatshirt around him to better protect his ears. Even his stuffed salmon was cold and wore one BabyLeg as a body sock. 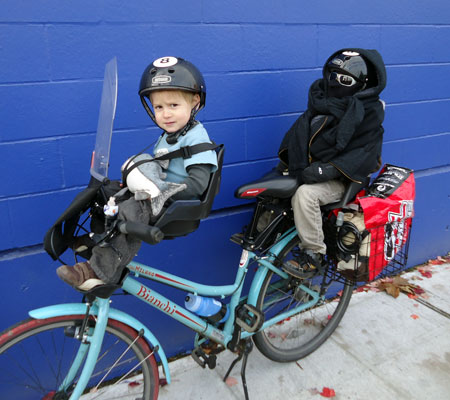 There’s talk of another winter Kidical Mass, which is exciting news, but we’ll have to toughen up a bit for it.