I stopped by Dutch Bike Co for a Bike Cap to keep my seat dry come rainy season (a.k.a. tomorrow until July 5th, 2012). They’re $17.95, but very cute and the shop has lots of designs available. I wish the forecast wasn’t so dreary tomorrow, but given I can’t change that, I’m eager to try out the new saddle cap. Speaking of Dutch Bike Co, I just read the sad news on Ding Ding Let’s Ride that their Chicago store has closed down. Another Chicago blog, Chicargobike, has a bit more information that seems a little unbelievable.

Today turned surprisingly warm so while waiting for the Ballard Library to open (The Tenth Great Thing About Barney was OK, but today I borrowed Saying Goodbye to Lulu which is better) the boys went crazy in the spray park across the street. I learned something new on the ride home: wet knees in the rear kid seat equal wet butt on the driver. Next time I’ll try a little harder to convince them to change into dry clothes before heading home.

Before the spray park I walked the bike through the Ballard Farmers Market. It’s not a breeze to walk the kid-laden bike around, but it works great as a makeshift stroller in situations like this. We picked up a couple honey sticks and saw Cascade bike ambassador Brian (on the left in the photo below) at his information station and swung by to say hi. He says he doesn’t mind that I refer to him as “The Omniscient Brian” because he cannot be stumped. I saw him on Friday at the Burke-Gilman detour so he kindly listened to me whine about that for a while. He was able to negotiate the detour without heading all the way down to the street like I did. I wish I’d thought to look up Brian’s bio before now. I cannot wait to tell the boys he used to drive the Monorail and Waterfront Streetcar. 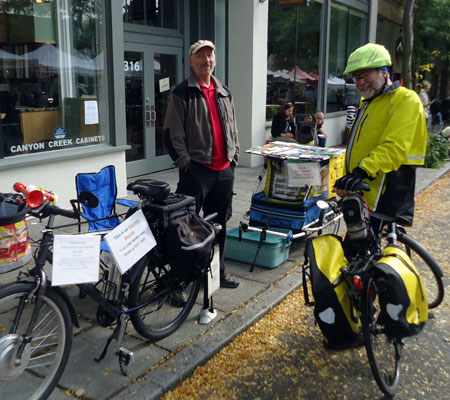 Done with Ballard, we headed home to grab balance bikes and ride around the local elementary school with a friend who is on a pedal bike. Not sure how soon we’ll be ready for one since the four-year old says he just wants bigger and bigger balance bikes. However, he does want to borrow this friend’s trail-a-bike so we can make a bike train with my road bike, the trail-a-bike, and our bike trailer. Of course the two-year old doesn’t want to be stuck in the caboose–he wants to be on the trail-a-bike, too.

Usually they both ride the four blocks to the school, but since the older boy wanted to keep his wet pants on, the younger one did, too, and had to bundle up in the stroller to stay warm.

Lately, they’ve been doing most of their balance biking with Mr. Family Ride while I slowly recuperate from a lingering cough. He’s got the little one doing some new tricks. I discovered the other day that he now lifts his feet to coast downhill! He even keeps his balance as he veers to the side into bushes. And today at the playground he walked his bike down a small flight of stairs many times. I consider this cyclocross training.

I need to confess that yesterday, the day after 30 Days of Biking ended, I didn’t ride my bike. We drove two-and-a-half hours to Bavarian Leavenworth for the area’s best Oktoberfest. We saw a group of people in lederhosen and dirndls ride beach cruisers through town. I think they were part of the opening parade we arrived too late to watch. I want to look into taking train and bikes next year because the long drive was a pain on the way up, but not so bad on the way home with content sleeping kids.

We passed the new Stevens Pass Bike Park, celebrating it’s opening weekend. The parking lot was full of cars–even at 8pm on our way back to Seattle.

I’m sure this won’t last, but I’m going to keep track of miles biked and bikeless days by month for a while. It’ll help with keeping up with the Walk Bike Ride Challenge, which seems right up my alley, but I’m finding it impossible to get around to plugging in my miles before it’s too late.