It took failing 30 Days of Biking to truly appreciate how much it’s changed my life. I completed the last two rounds (September 2010 and April 2011) successfully, but nine days into this month I fell prey to a kidney infection and basically slept for five days straight. I probably could have staggered out of bed for a ten-second driveway ride each of those days, and probably would have done so for the previous rounds in which I participated. I’m strangely not upset about having failed this time and I think it’s because those two successful rounds have played the biggest part in turning me into an everyday bike rider. It’s great to realize how many places I didn’t think were bikeable even six months ago are now regular destinations. 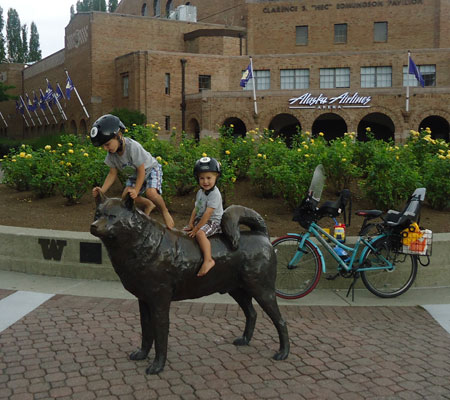 I wanted to do something big today to commemorate the end of the month, but our day started out on a very low note when my very first bike passenger, Lyle, The Greatest Chihuahua of All Time, bid farewell to this world after 18 years of being the very best pet, friend, and sometimes-accessory a gal could have. So my first trip was a car drive to the vet. Then the kids and I biked to nearby Green Lake playground (and on the way we circled the traffic circle cow a couple times, naturally) and then onward to the U-Village shopping center to pick up a copy of The Tenth Good Thing About Barney.

I had forgotten about the filming detour so we took a side trip by the UW husky statue while trying to find our way back to the Burke-Gilman Trail. The detour-sign holders weren’t very helpful and most people carried their bikes up a flight of stairs. We found a pedestrian bridge with ramp just past the doggie statue. On the way home I ran into a friend with trailer who was practically in tears over having been turned back at two points trying to get through the closure. Thank goodness it was the last day of filming. I’m boycotting the movie over the mayhem it’s caused.

And that’s the end of round four (round three for me) of 30 Days of Biking. We had some great experiences this month–we took part in some memorable events: the Val Kleitz Memorial Bike Ride, the safer roadways press conference, Moving Planet, and the Safe Streets Social ride; we discovered the South Ship Canal Trail and Snoqualmie Tunnel; and we survived the first rain of the season and transporting a very big box.

I’m looking forward to round five in April. Maybe I won’t even feel compelled to fill the month with a bunch of firsts and just ride ride ride. I do hope to encourage some friends to join me for the fun.