Today was huge. Most of the hilly stuff was at the beginning for our usual Wednesday trek to Whittier, but then we did a bunch of new stuff. First up was a side trip the little one and I took to Honore Artisan Bakery while the big one did his class. Cute place, but a little on the fancy side so no blueberry muffin to go for the big kid and nothing dairy- and soy-free (no surprise there) for the little one. But we had a nice coffee and from-home snack on the outdoor adirondack chairs.

Next up was a detour through Sunset Hill to pick up a Craigslist CARES harness. I’m contemplating making our next trip car- and carseat-free so the cheap harness was lure enough to get me to attempt a ride to a neighborhood with “Hill” in its name. It was easy getting there from Whittier, but I don’t know that I could make it up from Market.

Then we coasted down to the Ballard Locks because I forgot about the south side ramp closure. I have yet to ride over the Ballard Brige and I hear it’s no picnic (I think because it’s narrow on the bridge and busy streets on either side) so I decided to try to carry the bike up the stairs. I dismounted the kids and was about the pick up the bike when a guy hopped up from his spot on the grass with his wife and four dogs and offered to carry my bike. Even without kids, that thing is HEAVY so I not-very-convincingly told him I could manage and then thanked him profusely a million times (once for each stair) on the way up. 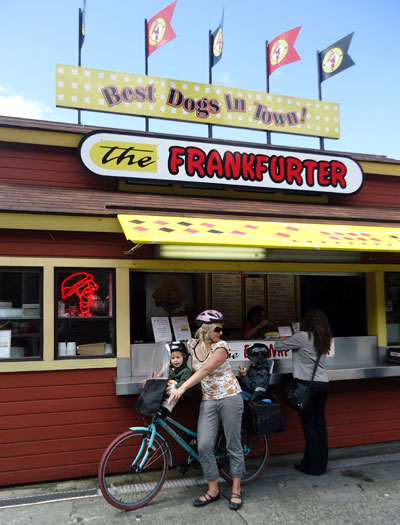 We paused to watch trains for a bit and also made a quick stop for kid hot dogs along the waterfront at The Frankfurter. I’m a sucker for any business that declares itself “the best” and stands that don’t require removing kids from the bike are so convenient. I love this picture a tourist couple took for me. Payback for my complaining about the kids not ever both looking at the camera.

Fortified for more riding, we headed south toward the Tom Bihn messenger bag factory, which finally (yay!) has regular retail hours. Notice I say “toward” and not “to” the factory. It’s a well-known fact I easily get lost and the detour signs really threw me off. I think the road closures didn’t actually affect my route much, but I’d already convinced myself we were lost and got farther and farther off track. At least we got to see extra train tracks and trains.

The kids were a bit stir crazy by the time we arrived so we didn’t stay long and made our way (just getting a little lost this time) back up to Pioneer Square as quickly as possible for lunch and running around. We were very close to the King Street Amtrak Station so we biked over, but were distracted by all the exciting construction equipment outside that we didn’t lock up and go in. Next time. 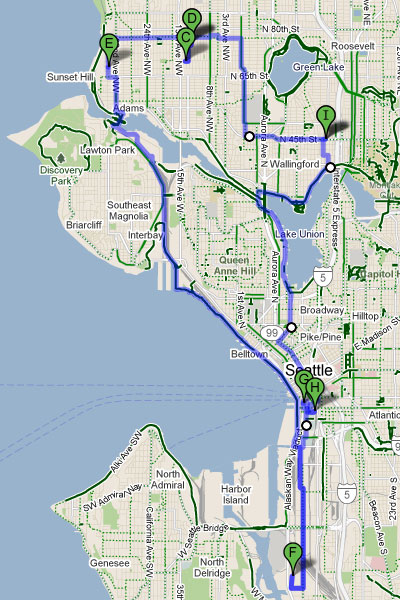 My map doesn’t include our getting lost mileage, but we must have done 30 miles all told. Needless to say, I’m not in a hurry to have such a big day again. We were out from 9:30 until 4:15 and most of that time was spent in the saddle.