Hello sunshine! The kids and I are visiting family in Los Angeles.

Our last visit was four years ago when we rented a Gazelle Cabby from Flying Pigeon LA. So fun! I posted a #TBT (throw-back Thursday) Instagram of this picture:

And as luck would have it, Bryan of Bikenanigans a.k.a. Orange & Purple–so called after their custom-colored Surly Big Dummies–saw my Instagram and commented about a Santa Monica Kidical Mass ride in a couple days. Behold the power of the internet! Bryan generously loaned us his Big Dummy, an 18-inch (mine is 16) swoop frame that worked perfectly and has soooo many cool components, and Cynthia (Purple) sent me all the details and found us bike helmets.

Here’s Cynthia leading the ride with a very cool mic (this headset microphone by Pyle, I think). She’s got a purple trailer behind her purple Big Dummy and would normally be wearing a purple cape, but bestowed it upon someone else to keep her Valentine’s Day palette to red and black. I got to borrow a blue cape, by the way! But I need to get some cape-biking tips because I spent much of the ride with it wrapped around my arm so it wouldn’t flap in my closer passenger’s face. Note to self: we need capes for Seattle Kidical Mass! 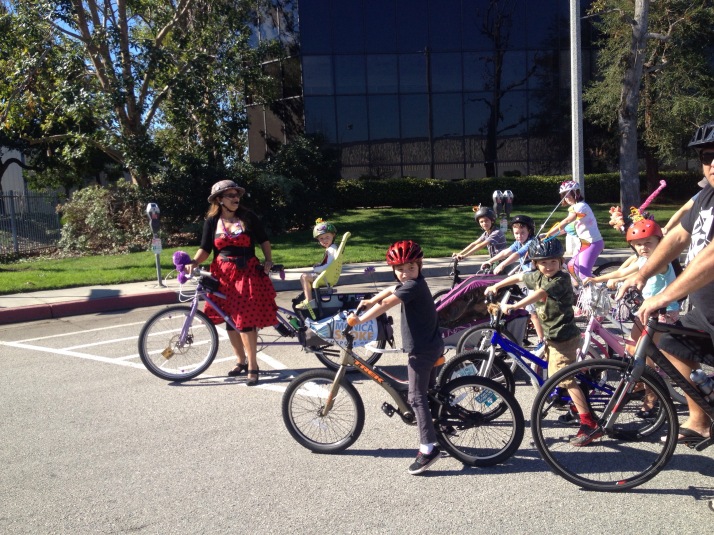 And here’s Bryan in his orange cape. He arrived on his orange Big Dummy with his Brompton in the pocket. I’m pretty sure the two of them invented the whole folding-bike-on-longtail-as-dingy thing. His bags are the new Surly Dummy Bags which I’d heard great things about, but never handled before and I agree that they’re awesome. My three-year old Xtracycle FreeLoader bags are holding up fine, but probably won’t last forever so I’m happy to have had the opportunity to check the out Dummy Bags. Bryan zoomed around on his Brompton and took lots photos of the ride. I’ll have to figure out where they get posted and update this post with a link.

The ride was called Santa Monica Spoke’s Kidical Mass Bike Ride and Family Event: Wheel you be my valentine? and had a terrific turnout. I don’t think I adequately captured how many participants turned out for helmet decorating, bike ride, costume contest, and cookie decorating, but see my additional photos here for a better idea.

There were lots of kids on their own bikes and of course I dug the non-traditional pairings like this dad on skateboard helping his daughter on her bike with training wheels:

And this other dad started out walking with his daughter, but when the route went by their house, he ran inside for a scooter to more easily keep up:

I’m eager to talk to Cynthia more about Santa Monica Spoke. Their involvement with Safe Routes to School makes me consider applying for a SDOT Safe Routes to School Mini Grant for Seattle Kidical Mass to make things a bit fancier, but it’s hard to feel worthy when I know there are so many things in Seattle that need that mini grant money for vital improvements. Looks like I have until April 30th to decide if I want to try for the next round…

Oh this looks fun! All the @pdxunityride s look fun, but skateboard- and roller-skate-friendly sounds AWESOME!