The littles and I are in LA for five days to visit family and see the sun. I got in touch with Flying Pigeon LA a while back and arranged to rent a cargo bike. They don’t have a regular rental program, but Josef said I could take out a Nihola, Christiania, or Gazelle Cabby. Naturally, I chose the Dutch one.

Once I got to the shop I started having second thoughts and was going to wimp out and take one of the trikes, but then Josef started saying how great it was that someone wanted to take out the Cabby and how it’s so fast and nimble and I felt obligated to pretend I was cool. Just like my first try on the bakfiets, I immediately veered to the side, careening into the gumball machine of the market next door. Fortunately, Josef had darted inside to grab his camera phone so he didn’t see my gaffe.

My brother met me at the shop (on his wife’s commuter bike, heh) and we went for a little ride together along the Arroyo Seco bicycle path. We realized it was our first bike ride together in a long time, probably since vacationing with the family on Texel as teenagers. The only thing missing was Oma leading the way, yelling “You kids keep up!” 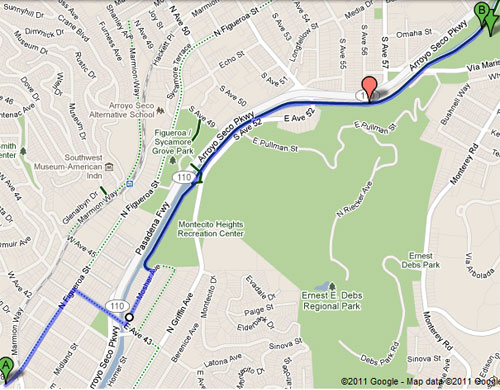 The path was great–down in the river basin, far from cars. We rode a couple miles to an “End path” sign, conveniently right next to a small park. The trail was slightly uphill (very slightly uphill, but it doesn’t take much when hauling 60 pounds of kids and stuff) so the trip back down the basin was even more fun. My brother had to head off to work before we were done in the park so I was on my own for the return leg and, of course, took a wrong turn. I rode up Griffin Avenue a couple blocks and realized my mistake when I saw the “Montecito Heights” sign and noticed how high I was above the freeway.

It was good to experience a hill on the Cabby, something I probably wouldn’t have done voluntarily. It was hard. I think I’m just not suited to hills on any bike. The Cabby was fun to ride, but harder to handle than a normal bike, just like the bakfiets. The cargo area didn’t provide much storage area in addition to the kids so Josef stuck a basket on to accommodate our stuff. The kickstand was a bit hard to wrestle on and off, but I think that’s just the nature of any double kickstand. I liked the padded, separated shoulder belts. Just a three-point harness, like most Euro products. The two separate straps means they can easily go on a helmet-wearing kid with no pesky ducking and squishing.