Most of our weekday family biking is done without ride buddies. You can tell from day 20 how exciting it is to have company, especially when unexpected. This morning Ellie swung by to borrow some family biking equipment (Burley Piccolo trailer bike, balance bike, kid bike helmet) to display at Adobe’s Green Transportation Fair. That’s a Kona Ute longtail cargo bike with LionTail’s Sparrow System electric assist. I was a bit worried about making her late to work (chronic problem of mine: apologizing for slowing down ride buddies), but we got to ride with Ellie half the way to preschool–woohoo bike buddy #1!

Next I dropped off my second kid and realized Julie of Wheelha.us was heading the same way as me…except she needed to stop by Mighty-O Donuts on the way. Naturally I didn’t mind the extra stop. Bike buddy #2! (And #3 and #4 if I count the kids in the Bullitt.) 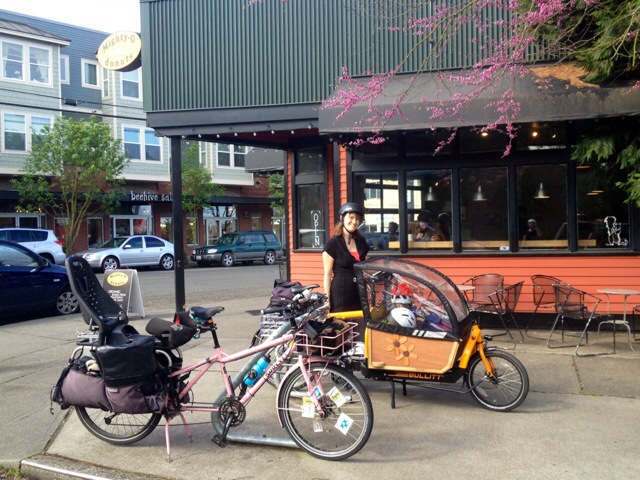 We made two discoveries on the way over, one good, one bad. The good: a new Little Free Library at Latona and 51st.

The bad: the speed bumps on NE 56th Street are gone! Maybe they had to go temporarily so the pitted road can be repaved? And maybe they’ll come back as full-street speed bumps rather than the less effective triple humps? Hoping to hear more about this change soon.

I was headed to a coffee shop with wi-fi and Julie was headed to G&O Family Cyclery so I was excited to show her my new favorite route to Greenwood (see day 16, though up Latona). She’d used this route once before, but on the day of a regatta at Green Lake where cars idled in the bike lane and she’s boycotted it ever since. Today was a regular day and I think she liked it!

I popped into G&O when I was done wi-fi-ing next door, but I didn’t get enough bike-shop-hang-out time so I left to fetch my preschooler and headed right back up. I don’t usually hit Greenwood from North Lower Queen Anne, but when I do, I go up Fremont Avenue because any other route is way out of the way. Plus the light at the five-way intersection half-way up is always red, providing a little rest break. It’s not a hill I’d want to climb daily, but it’s OK every once in a while. And today something interesting happened I captured on Instagram:

G&O was preparing for a photoshoot for Momentum Magazine. Julie and I couldn’t stay long enough to play customers in the background, but our friend Maritess should be visible in some of the pictures! But we were there for the prep work–Davey and Tyler wanted to move a bunch of bike boxes off the showroom floor for the shoot and our kids insisted on helping out. They insisted on helping out with Every. Single. Bike. Box. and we were pretty late in leaving to pick up our oldests from elementary school. But hey, bike buddy #2 again! It was an exhilarating race across town and…WE JUST MADE IT! There’s no penalty for being late to pickup and our teacher assured us she’s happy to wait outside with the kids for late parents, but I’ve yet to be late. 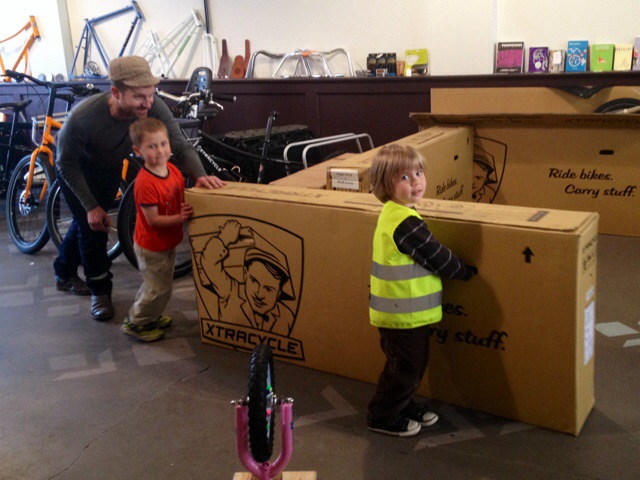 I cross Woodstock several times a day, but rarely ride on it because both the arterial-with-narrow-bike-lane and business-district-road-diet parts are awful to bike on (like so many streets!) so it’s probably taken me a while to notice the vacated El Gallo Taqueria 😢 spot has been filled by @vikingsoulfood — yay!!!!!