I should point out that I’m pretty sure no trailer or trailer bike manufacturer would recommend using a setup like this. I like EEE because it’s a way to carry two or three kids with separate pieces that can easily be broken down. For me that means it’s easy to carry up from the basement, but I like to imagine a family with three kids piling the pieces into their car and driving to a safe, flat, wide path for a wonderful afternoon ride with the kids. EEE isn’t ideal in a busy city, but we managed OK through Fremont and crossing streets numerous times for the Alaskan Way construction detours. It takes care to angle oneself carefully at corners to wait out a red light without the caboose sticking out into traffic.

We rode by both bike counters: Fremont ignored us, West Seattle counted us. But the West Seattle one is a little glitchy so I wasn’t too celebratory. And it ignored us on the way home. 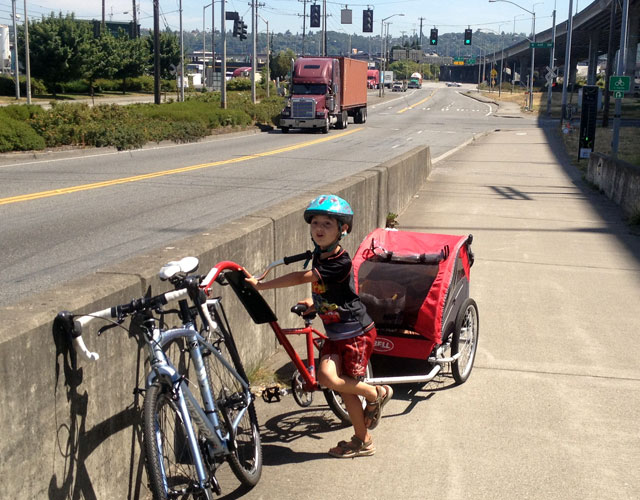 So why the last hurrah? Cyclocross season is approaching and one isn’t supposed to have extra stuff (drink cages, fenders, Burley Piccolo rear racks) that could fall off in a race and hurt someone. My original plan was to ride three separate bikes down to Recycled Cycles in the morning, but I was tired from all the pedaling yesterday so we dragged the bike down on our way to lunch with friends down the street at Agua Verde.

So this is what I ended up riding all day:

We were quite the clown bike parade–initially we were also with Anne of Car Free Days on her Xtracycle and Shawn of Wheelha.us on his Big Dummy. Kristi and Pete normally ride a Madsen bucket bike and Yuba Boda Boda midtail in the Bay Area, but are traveling (via Portland where Pete won the Fiets of Parenthood!) with their new Brompton folding bikes. This is where we broke off from the parade of Kristi, Pete, and Julie of Wheelha.us.

Speaking of cyclocross, the WAWCX (Washington Women of Cyclocross) Festival is Sunday. There are clinics, a non-competitive course ride-through, and a mom race! Online registration is closed, but one can register on site. I’m doing the mom race:

Exclusive for this event, the Mom Race is an opportunity to truly celebrate and recognize women who race cyclocross and their other life roles. Mom categories will be seeded based on the age of their oldest child (-12mo, 13-35mo, 3-5yo, 6-10yo, 11-14yo, 15-19yo, 20+yo). Thanks to Woodinville Bicycle, all proceeds from the Mom Category Race will benefit the ultimate WAWCX Mom-of-Cross, Sarah Bender and her family.

Or soon we can trade that caboose for a proper engine–the newly four-year old is just about tall enough for the Burley Piccolo. I want to stick it behind a tandem bike in the future and we’ll all share the pedaling.

…not that today saw any pedaling help. My six-year old spent the whole trip to Alki pedaling backwards. Apparently that’s much more fun that pedaling forward. And on the way home he spent the trip perched in a standing position, occasionally doing a half pedalstroke backwards then forwards. At least on a tandem his pedals will move (and hopefully his feet will be on them) and I imagine the little guy will be a more eager helper…although today his big move was shoving the sides of the trailer into the wheels creating even more drag. When I described EEE to a neighbor once he asked, “Why don’t you just drag an anchor around while you’re at it?” Indeed. 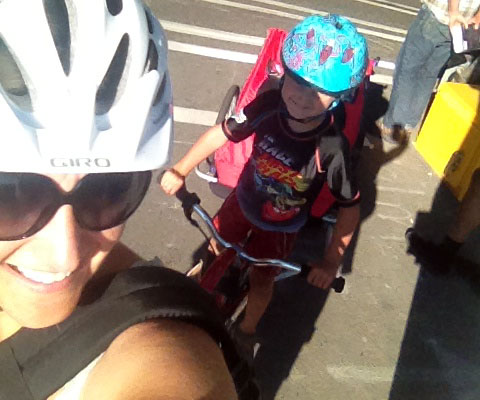