My friend and her kids are visiting! Last year we got around town with a combination of busing and bike/car–the boys and me on the old mamabike while she and her kids used my car. I’d thought of borrowing bikes for her kids (ages 7 and 5) since they pedal around Florida, but I didn’t want to subject them to our hills.

Thanks to the Big Dummy and Engine Engine Engine, I thought we’d add biking to the mix this year and had her bring the kids’ helmets. My original idea was to stick my two guys in the double trailer and utilize one of her strong pedalers while she carried just one kid on the Big Dummy’s FlightDeck. Unfortunately, my little engineer is a bit greedy and didn’t want to give up his new perch so we compromised on letting him do the downhill portions and letting the big kids split the uphill. 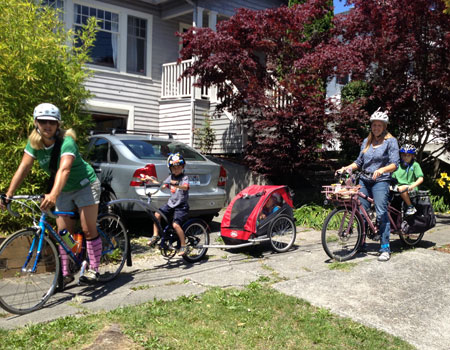 I was hoping to avoid a downhill start for an easier homecoming, but I couldn’t deny the visiting monkeys a visit to Gas Works Park. They dominated the play barn and schooled a parkouring college kid in a game of tag. My guys did some milder climbing…until my five-year old somehow followed the accomplished climbers up a stone archway. Climbing up to rescue him was the definitely the hardest thing I had to do all day…but it didn’t make the bicycle hill climbing seem any easier.

I wore out the seven-year old less than half-way up the hill so I swapped him for his sister and realized I need a little girl to pedal with! It may have just been that she fit the trail-a-bike better than the boys, but she was SO CUTE! 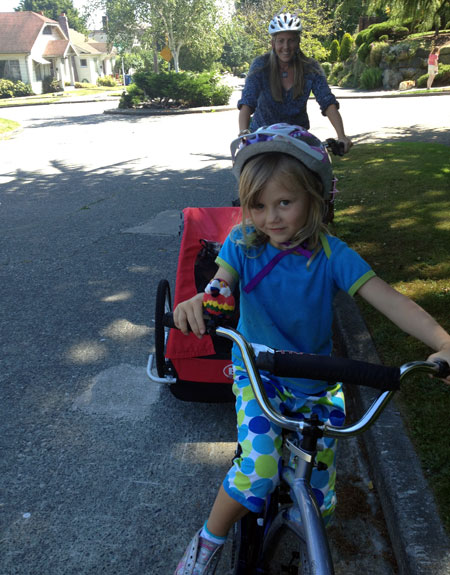 The boys and I came to Gas Works yesterday, too. We got to see Tall Bike Bobby in the middle of an infrastructure showcase ride as he passes through Seattle on his west coast tour. Tall bikes are impressive to begin with, but even more so parked next to Kinderbike minis! 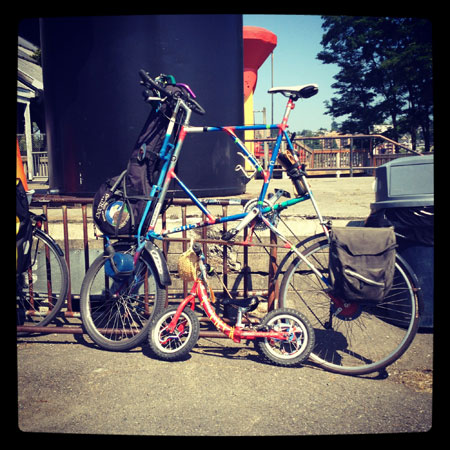 Stopped at this new yarnbomb to shed most of my layers into that bulging handlebar bag: headband, puffy vest, windbreaker, gloves.