My friend became the proud owner of a Big Dummy two weeks ago and now she’s got an awesome new blog, The Main Tank: A vegan, feminist, AP mama doing family biking in Seattle. We get to ride together a lot to and from preschool, but we often hit other destinations, too, like the flagship REI store today. The kids loved the indoor bike rack, but note: the rack is not bolted to the floor so bike rack acrobatics are somewhat limited.

Some brave bikes still use the outdoor bike racks and out there we saw the greatest fender. My boys decided a salmon or a dinosaur had occupied the missing spot.

I love riding with friends, but seeing my routes through others’ eyes is changing my perspective. I can’t imagine riding with a separately-biking kid downtown [South Lake Union? Cascade? I don’t know what to call REI’s neighborhood], but I don’t even like leading willing adults along some of these streets of ours. The ride over from Lower Queen Anne wasn’t bad…except we met with a construction site by Cascade Playground and had to take to the narrow sidewalk and then detour a block.

On the way home I thought Eastlake Avenue would be nice since we’d get to keep some of our altitude. Climbing north from the Burke-Gilman Trail into Wallingford and Tangletown twice every day can get tiring and tiresome. Unfortunately, I haven’t really been paying attention to how miserable Eastlake is–though I clearly remember saying several times that I’ll never take Eastlake again–because it’s awful! There’s still a hill to climb…and then descend…and then climb again. I’d conveniently forgotten all about the second two-thirds of the 2.5-mile slog along Eastlake. I’m not going to frustrate myself by checking, but I’m pretty sure there’s more of a net climb using Eastlake/11th over Westlake/Meridian. Not to mention that it’s tricky to cross to the east side of the street from REI. I opted to keep us on the sidewalk of the west side until we reached a stoplight, but that’s four long blocks to Mercer.

But back to fun bike stuff! The Main Tank’s Dummy is sporting the purple bar ends I scored at Recycled Cycles. This makes me so happy because I walked around the store with them on three separate occasions without buying them because what the heck do I need purple bar ends for? But I couldn’t resist when they suggested I take them home for a buck. It was worth the price just to Instagram them on my dining room table, but they’ve just been mocking me from a bookshelf since then. Now I get to see them in action almost every day. 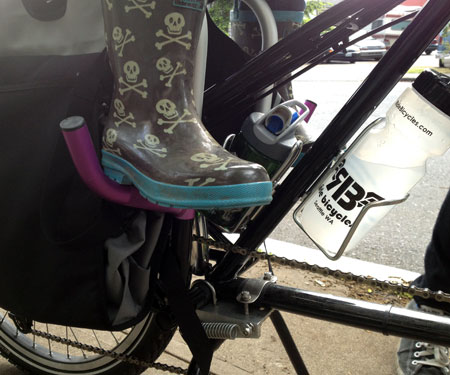 TMT’s rig also gives me a chance to vicariously experience cool gear. She’s got a BioLogic iPhone Bike Mount that looks wonderful, though I’d have to be brave enough to give up my very protective Otter Box to use one, which probably isn’t a good idea given how klutzy I am.

2 thoughts on “Riding with The Main Tank”