I took my Big Dummy in for cable tightening/adjusting this morning and happened upon my friend’s husband’s new Xtracycle! 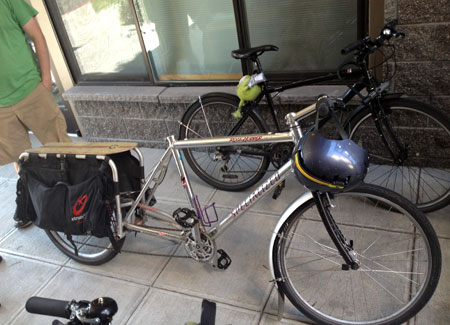 This just so happens to be the same Xtracycle I tweeted about after Menstrual Monday a couple weeks ago. Turns out, the new owner also knew the old owner and a happy new home was found. The seat post was too thick to take stoker bars, but tonight I saw a picture on Facebook of a setup I’m going to have to see in person soon. It looked like it involved a block of wood and pair of handlebars.

I also brought in the borrowed 12-inch kiddie bike for a flat fix. Turns out we have every size wrench except the one needed to take off the wheel. (Well, it’s somewhere, probably in a box buried in the garage.) There’s nothing cuter that a tiny bike up in a repair stand.

And there’s nothing odder than watching Christiaan test ride a tiny bike to make sure it’s road ready. I don’t think this is standard practice so don’t be scared to take your little bikes to Ride Bicycles for work.

I thought we’d head immediately to a park and the little guy would learn to pedal, but he wanted to head home. Boo. The five-year old has no interest in pedaling so I’ve decided to teach the two-year old first. My younger brother learned to ride a bike before I did so I figure it’ll be the same this generation. By the way, that’s bike mechanic Edward’s Big Dummy in the foreground, making three longtails so far for those keeping count.

Edward called shortly after I got home to let me know I’d left my bike lock there. I took that as a sign I should leave both kids with Mr. Family Ride and take my road bike (not that I can’t fit both kids and road bike, I’m sure!) in for a long-needed tune up while retrieving the lock. Part of my Mothers Day present was “more time to ride bikes alone” so I’ve signed up for Menstrual Monday’s Girls of Summer Alleycat and I’d like to be able to ride it without having to stop and put my chain back on a bunch of times.

Christiaan took a look at my bike and said he’s never seen anything like it. I have no way to explain it, but just the middle ring is missing a bunch of its teeth. 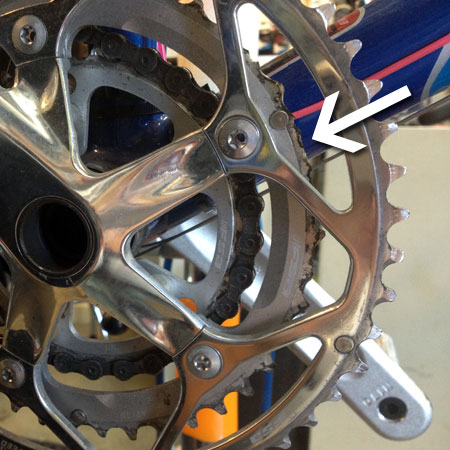 And the fourth and final Big Dummy of the day–my friend’s new one! Pretty similar to mine with dynamo hub lights, Yepp Peapod III for the toddler and preschooler on the FlightDeck, and Rolling Jackass center stand. 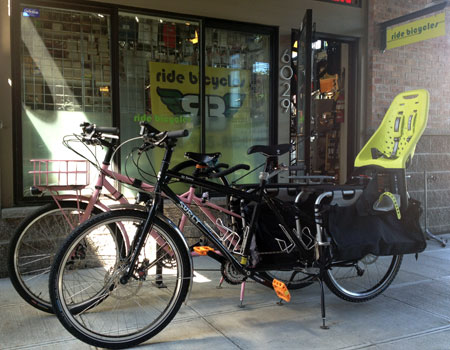 One difference: she’s got all four water bottle cages. I definitely need to add another.

I hung around the shop until she came in to claim her new rig and escorted her to Tangletown to reunite with her family. I don’t doubt that she could have carried two kids and 16″ kiddie bike on her first voyage, but I offered to carry the bike so she could keep things somewhat simple this first day out. Meanwhile, her husband was on their Madsen bucket bike and we followed him to a yard sale to retrieve two bookcases before heading home. We made quite the parade! He’s pretty speedy on any bike, but she was able to leave him in the dust on a fairly minor hill. Go Big Dummy, go! 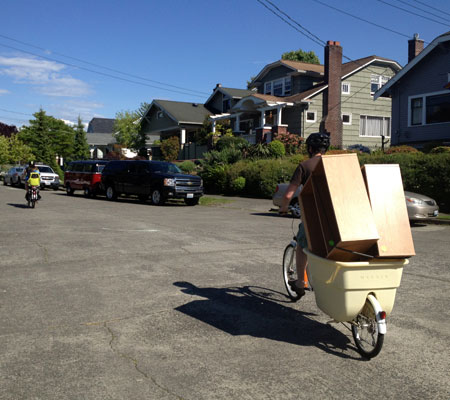 2 thoughts on “New longtail bikes for everyone!”

First overshop since pedaling my Xtracycle Hooptie up to Canada. Plus no regular WideLoader as of Sunday. No prob bc this bike is a beast. 🛒💪