Oh, and a six-pack of IPA. I called Aaron’s Bike Repair yesterday to ask if he’d sell me a 12-inch inner tube for the borrowed kiddie pedal bike and this was the price. The beer didn’t really ride over in the basket–that was just for the glamor shot. I was able to fit it in the FreeLoaders, too.

This is the first time I was able to easily get more than just the balance bikes on the sides. I’m a little disappointed in myself that I had to resort to a bungee cord to attach the big yellow truck. I feel like I should be able to get reasonably large loads on without resorting to bungees. I’ll probably get over that once I’ve done this a few more times.

Last year the Ship Canal Trail wasn’t completed so the Easter ride involved quite a bit of Nickerson, a street I’m not fond of. We also took a car lane to cross the Fremont Bridge that day which I thought was awfully roguish at the time, but was, in fact, preferable to this year during which our bike train came to a full stop a couple times on the bike/ped path to let by pedestrians coming in the opposite direction.

Speaking of the Ship Canal Trail, I discovered a nice alternative to the 6.5% Emerson Place climb at Fisherman’s Terminal: I turned right on 21st and took the first left on Elmore to 23rd. It was only a two-block detour and made all the difference, but I have a feeling I’ll forget how bad the hill is and resort to trying to climb it a couple more times before I make the detour a regular thing. I’ll make the full Magnolia trek again soon and put it all on a map.

The slight cloudy haze was completely gone by the time we arrived to Gas Works Park and we had an excellent potluck. The kids did a bit of tooling around on their balance bikes and the four-year old even built his own first “cargo bike” using the bungee cord. 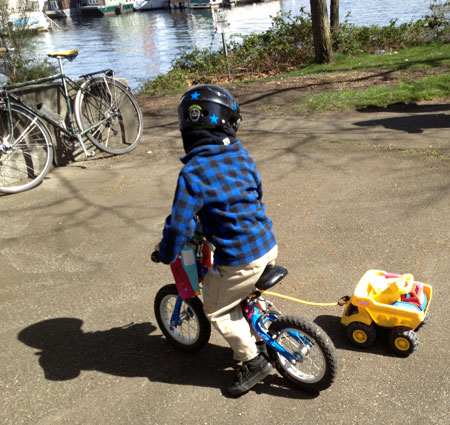 Janice’s mixte Xtracycle was the prettiest bike after mine:

I took note of two intriguing details, the Dirty Dog MTB Skull Rotor (Aaron’s Big Dummy has one, too):

And the Twofish Unlimited Quick Cage Water Bottle Holder she used to transport a vase of flowers. 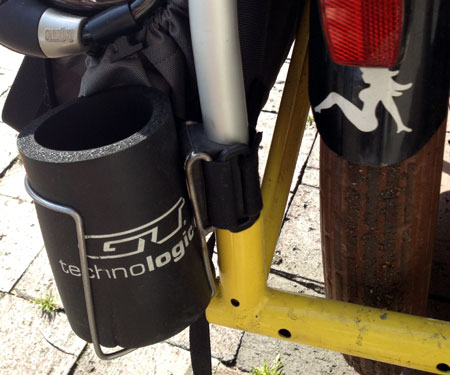 And Aaron had a great way for storing an extra bungee cord…though I realized this probably wouldn’t work on my bike with my bungee-loving passengers so close by. 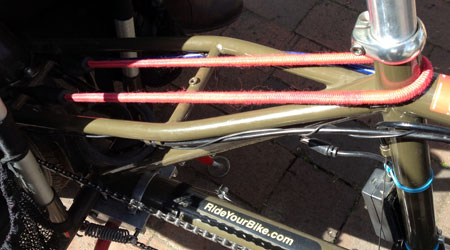 Mr. Family Ride even came down towards the end. Here’s his bike parked between those of Haulin’ Colin and Kelli of Yoga for Bikers. Kelli told me she’ll lead some demonstrations at Pedalers’ Fair in a couple weeks. By the way, Colin met the party at Gas Works therefore I didn’t tally his cargo bike in my earlier count. 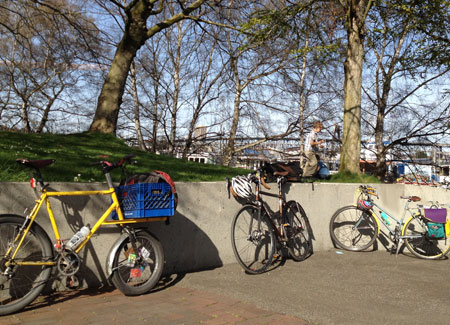 We never made it to the sand pit, but the boys used their sand shovels to dig worms out of the dirt. The first worm didn’t fare so well, but we got things worked out and several worms and a pile of dirt took a joyride around the party in the back of the big yellow truck. I was happy when we returned the worms to their families and headed home ourselves. Their chauffeur, however, wasn’t happy about parting company. And the other kid dropped a prized rock he’d been holding on the back of the bike so our ride home featured many wails of “Worm!” “Rock!” “Worm!” “Rock!”

Aw Pixie you don’t get to ride with the pie 😢