Wednesday is the one day of the week I need to use the car. We have twenty minutes to get from preschool in Lower Queen Anne to a class in Lake City, eight car miles (and at least 11 bike miles) away. Last year we took the bike and bus once, but there’s simply not enough time this year. At least our morning was full of bikey fun and I clocked 14 miles.

After preschool drop off, the toddler and I explored a bike route to Mounger Pool in the Magnolia neighborhood. I wouldn’t call it an easy ride, but we made it. I’m fighting a cold so I want to try again when I’m 100%. I also want to do a little experimenting with the route. I really don’t like the Emerson hill where the Ship Canal Trail ends. It’s short, but steep (for me). And then I think I could avoid the uphill/downhill of Condon Way. Of course the long gradual slog up Thorndyke is unavoidable, but maybe it’ll get easier in time.

Magnolia is a cute neighborhood so I don’t mind spending more time there while experimenting with bike routes. We stopped briefly at Serendipity Cafe, though there was no bike rack out front. It was cold out so I locked up in front of one of the two metal benches no one was going to make use of. There’s a bike rack at the opposite end of the block, but I’m too lazy to walk that far from a parking spot. 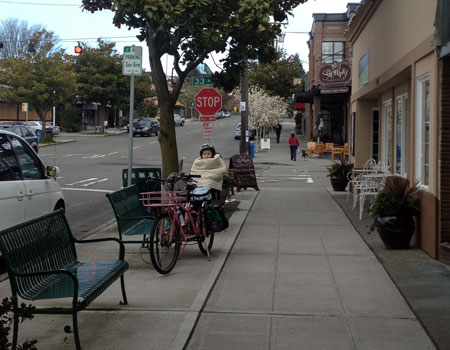 We rode back to Fremont to meet the preschool at a tour of Pel’Meni Dumpling Tzar. I had intended to meet them at school and help keep an eye on walking preschoolers, but I got a little lost on the way out of Magnolia and went straight to the restaurant. Things never look the same biking in the opposite direction! But it gave me some ideas for my modified route. And our timing allowed us to see a big and little tugboat traveling along the ship canal together. I didn’t realize they come in different sizes.

Pel’Meni is really cute with a large patio out back. We’re definitely coming back soon to eat dumplings–today’s tour was very educational, but not tummy-filling.

After walking the kids part of the way back to school we raced home to fetch the car. The last time I used the car was for this class a week ago. Last week we swung by Trader Joe’s on our way home, but inspired by 30 Days of Biking I thought it’d be better to go straight home and ride the mile there. Not for the added miles, but because taking the bike makes the trip an adventure while driving makes it feel like a chore. I don’t think this sensation will ever wear off, although we’ve only been shopping regularly by bike for four months now so I might be wrong. Unfortunately, the big kid who’s freshly recuperated from a stomach bug is now catching a cold and didn’t want to go back out. But I’m going to remember this idea and next time we’re in the car not consider it important to combine a grocery trip when it’s so much more fun to come back out with the bike.