This morning’s ride to Georgetown was our longest non-stop trip. Google maps estimated the trip at 58 minutes, but Google maps neglected to mention the Airport Way South Viaduct closure so with map checking and turning around, it took us an hour and a half door to door. The kids were totally fine with the long ride. It probably helped that we saw lots of trains along the way: streetcar, monorail, Amtrak, light rail, freight.
I was excited to show the boys the SODO Trail I discovered last month. They liked being so close to the light rail train and admired the transport-oriented murals.

Our detour from the closed bridge took us to the 4th Avenue South bridge over the train tracks. Great view of the train yard, but the sidewalk is narrower than 1st Avenue South–or at least feels narrower thanks to the railing on the street side. We met a couple pedestrians on our way over and it made me thankful for my narrow longtail. 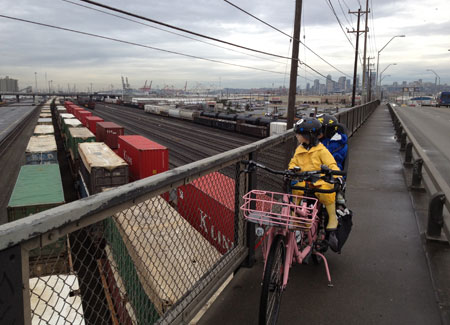 I had hoped today’s route to Georgetown would be a winner. The friends we visited live very close to Oxbow (Hat N Boots) Park so I imagine we’ll take this trip often in the summer. I decided early in the ride I didn’t like the route, having started on Eastlake. Never mind the car congestion, the hill is just too big to be worth it unless I’m going somewhere near the top of the hill, like REI. Google maps might think Eastlake is my fastest route to anywhere south, but my uphill speed must negate any advantage over taking the much more pleasant Westlake.

On the way home we took the 1st Avenue South bridge and discovered even more new construction. As I was waiting at a light on South Horton Street, wondering if the Eliot Bay Trail was really just across the street, I saw a bike go by. Thank goodness! She saw me and we waved at each other and moments later I realized it was Del Rey, local blues singer and frequent cargo bike ride participant. Had it not been so grey out, I would have recognized her sparkly gold helmet. Plus she wasn’t on her familiar Dutch bike, preferring her Brompton these days. I decided she probably hadn’t recognized me on my new bike, either, so I set to chasing her down. This is actually an Xtracycle pedaling towards us in the bike lane! What are the odds? 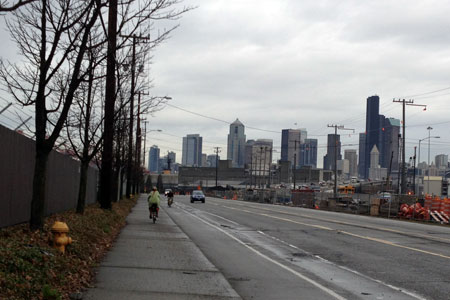 It is so nice to ride alongside someone familiar with the quirks of a trail. I was tempted to follow along all the way to Fremont (Hub and Bespoke to be exact), but I had promised the boys a visit to the waterfront carousel. I’m not sure what it’s like here on weekends, but it’s a great destination on weekdays. The arcade area is loud, but there’s a long quiet hallway linking the various businesses together. 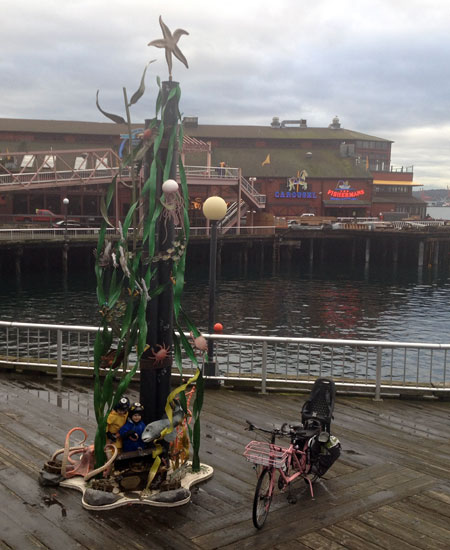 We came home through the Ballard Locks. The fish ladder was deserted, but the kids didn’t want to get back on the bike after looking for salmon so for the first time ever, I was able to wheel an empty bike across the narrow walkways. Normally, this would be a great thing, but this was the Big Dummy’s inaugural visit to the locks and I wanted to see how easy it was to negotiate the sharp turns and impatient pedestrians.

Although all the photos look awfully wet, it didn’t rain on us until the last ten minutes of the ride–and then it poured. The kids weren’t jazzed about it, but at least they were in rain gear–which I’d luckily put on them for warmth.

The final tally of our day was 27.9 miles–over nine hours with two long and one short stops. Not our usual day, but it was a good one.

Stopped at this new yarnbomb to shed most of my layers into that bulging handlebar bag: headband, puffy vest, windbreaker, gloves.