Moving Planet: A Day Move Beyond Fossil Fuels was a blast yesterday! People biked (and walked/bused/drove) in from all over the city to celebrate at South Lake Union Park. The boys and I traded bike helmets for pirate hats (for them) and nautical scarf (for me) and were volunteer skippers at the model boat pond, helping set up kids up with Pirate Pond Boats. The boats were lots of fun, but we didn’t get a chance to explore the festival. Before things got too busy on the pond, I met Kelli of Yoga for Bikers who was setting up to conduct a yoga class using bikes as yoga props. One of these days I hope to go on one of her YoCycle rides. 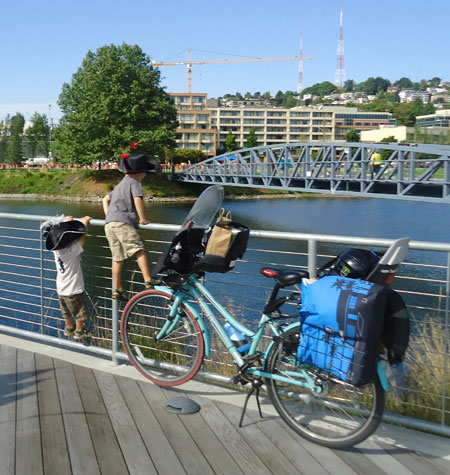 It wasn’t lonely at the pond, though. Friends stopped by to sail boats and say hi and we made a new friend in Jennifer, the Seattle component of Loop-Frame Love–she recognized my bike from online pictures! :)

Once our shift at the pond ended, I brought my bike over to the Family Bike Expo so people could test ride it. Morgan had a lot of cool bikes on display, including my friend’s Madsen that got taken for spins by nearly everyone at the park–I wasn’t sure my bike would be enticing enough. But after a while it got three or four test riders…including a tall guy, which is always funny to watch. His wife tried it out, too, before they took off on their bike train. And it really was a bike train: mom riding solo, oldest kid riding solo, dad pulling trail-a-bike and bike trailer. They like having the trailer behind the trail-a-bike because it keeps it stable. I have yet to try a trail-a-bike, but apparently they flop around a bit. 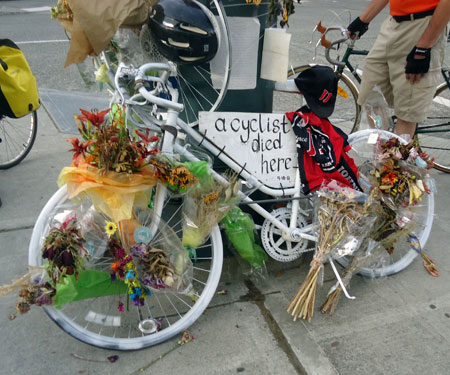 As Moving Planet wound down, bikers gathered for the Safe Streets Social: A slow bike ride to honor the fallen and support each other. A lot of people came out for it. We got to meet The VeloBusDriver which was very exciting, but the boys were too shy to ask him any of their million bus-related questions. It wasn’t a very long ride since the three ghost bikes are startlingly close to one another, but we went slow (well, my normal pace) and it really was a social event. I chatted with Anne-Marije Rook, The Riding Reporter a lot (all off the record, I think) and had a great time with Del Rey, whom I met back on the Easter Cargo Bike Ride. This is her Bicycle Blues video, which I learned of when a fan recognized her:

Very fitting theme for today’s ride (more info here). She mentioned she might do a European ukulele tour on a Brompton folding bike. What a life!

I can’t get the “embed video” to cooperate, but here is the local Fox coverage of the ride.

No riding today. I’m really screwing up this round’s 30 Days of Biking. I’m not as sick as I was the first five missed days, but I’m sick that sleeping all day while the boys and broken-shoulder Mr. Family Ride drove to the beach sounded like a great plan. I’m pretty wimpy when I’m sick and this lingering cough is making me slow and whiny. Wah.

After work I took one kid to @cartlandia and [again!!!] got dropped on the way home (cold hands). Bold move when I’m the one with the basket holding your hamburger, kiddo!