Note to self: don’t crash your bike the one day of the week the bike shop is closed. You’ll want to drop it off ASAP to get it fixed so you don’t have to deal with it the next day.

Amazingly, the kids were totally cool getting back on the bike today after yesterday’s crash. I didn’t want to walk the mile home at three-year-old pace so I bungeed the trailer stroller (called the “trailer stroller” because it lives in the double trailer). It’s probably not a good idea that I’ve discovered a way to add even more stuff and weight to the back of the bike, but how exciting! 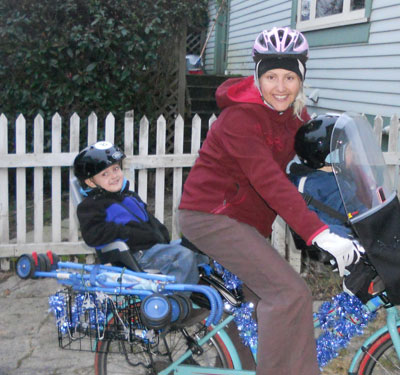 Dan wrenched the handlebars back into alignment so the bike rode over fine and it’s probably fine to ride in general, but it could use a good going-over. And I’m still recovering from the shock of crashing so I’m happy to have the bike out of my hands for a while. I probably overreacted when I left our helmets at the shop, too. But if I want to ride a different bike I can always use the kids’ old helmets and go without myself or see if Dan’s fits me.

In car news, we just discovered Dan only has three payments left on his lease. I think we could easily function as a one-car family. At some point he’ll start commuting to work in Bellevue by bike, but in the meantime I could give up my car to him. I do wish I’d opted for a small station wagon instead of the sedan. But at least I have new roof racks! We had plans to go snowboarding in Vancouver last weekend, but Dan’s check engine light came on. Rather than cancel our plans, we had Rack N Road attach a roof rack to my little car. I’ve wanted one for a while so it all fell into my master plan.