This afternoon we biked to Ballard for the Bike to Work Day after party and the Kidical Mass ride. The weather wasn’t too bad when we arrived, but as soon as we hit the road for the group ride, it started raining soooo hard. We took cover under a bridge after a few blocks to put on our rain gear, but we were already drenched by that point. 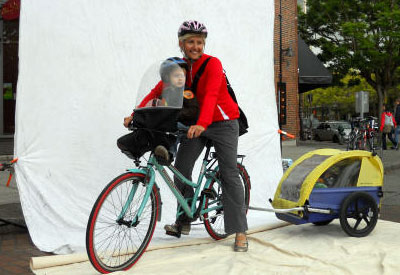 The original plan was to ride west to secret beach for a picnic dinner, but the new plan was to head east (towards home, yay) and have dinner at Tacos Guaymas in Fremont. But a few blocks after the bridge I thought I heard Kim shout “hail!” and assumed Julian would only cancel the ride in the event of snow or hail. For the record, it wasn’t hailing, but it was awfully miserable out. It turns out Kim was shouting “Hales!” so we pulled over at Hales Ales and had a terrific time. I was initially upset that Dan couldn’t come along, but it worked out well because he drove over to rescue us after dinner and drinks. Everyone else was brave and biked home.

I cannot stress how much I love being the same size as my teen and the bike redundancy it has yielded! My dynamo-lit Straggler has a flat (front tire this time, it likes to alternate 🙃) and my teen’s mtb has lights on it from D&D last night so I yoinked it!