We broke up our LA visit with a day trip up to my birthplace, Santa Barbara. WheelHouse is an amazing shop: it’s huge and it’s full of gorgeous bikes. They have a rental program so I took a Bakfiets out for an hour (for just $15!) and had a blast. This was a newer version of the bike and it was amazing how well it handled compared to the one I tested out in Seattle–which I think wasn’t Dutch Bike Co’s rental vehicle, by the way, as Alex called it “Fritz’s old Bakfiets.” This new Bakfiets was also easier to manipulate than the Gazelle Cabby I checked out yesterday. WheelHouse Erik gave me the technical explanation, but it was a bit over my head. 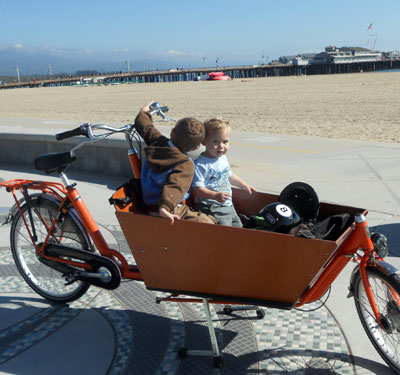 In addition to being a great ride, it’s a nice change to ride a bike with normal seat and pedal placement (and this applies to all cargo bikes). On my Milano, I have to keep my seat a bit lower than I’d like so I can reach the ground easily. I also have to keep my feet on the outer edges of the pedals and aim my knees out to the sides a bit to avoid banging into the Bobike Mini. I don’t think either would be an issue had I had the foresight to request a proper Dutch bike as my push present, but I’m overall happy with the Bianchi Milano.

After riding up and down the waterfront bike path, we returned to WheelHouse and swapped the Bakfiets for a Christiania. What a neat bike! Its three wheels make for an incredibly sturdy vehicle, but the handling took a lot of getting used to. The rider has to shove the handlebars to the side to turn the bike. Not to call it a clown bike, but it reminded me of the swing bike I saw at the Cyclecide bike rodeo at Bumbershoot last year. I mostly just did figure 8s in the parking lot because it’s really fun to turn! The kids liked it a lot, too. Boxcycles sent me a link to this video of real trick turning on a Christiania, which put my riding to shame.

Yesterday I discovered a bakfiets *can* go over the Hollywood Transit Center. I lifted the rear of the @urbanarrow, but I think I probably could have navigated with 10-point turns at the corners had it been too heavy.