Started the day with school drop off with one passenger and one bike rider. The balloon is still going strong — a teenager even shouted at me that she liked it today!

On the way home Pixie and I checked out the house with the little horses. If it’s clear to turn left off the busy street I use on the way home I’ll do so a bit early and today it took us by the horse house. In the past I’ve let Pixie out to walk among the herd (they’re the exact same size, it’s so cute!) but I could hear the homeowner working in the carport so we just paid our respects and moved on. Bike: Surly Big Dummy.

Later on Kath of Portlandize met up with our cargo bikes and laptops to sit in a cafe and work together as we try to do once a week. COFFEE BEER is very new, as are its bike racks. You can tell by that extra bar near the bottom so if a bike thief unbolts the bottom of the rack they can’t slip your lock off. Bike: Surly Big Dummy.

We went to the grocery store together after working and Kath showed me her favorite route in — it avoids the steep hill I take and doesn’t require biking through the parking lot. It also features a cool “desire line:”

In the evening I picked up a free trailer from my local Buy Nothing Group that no one else wanted. It’s the same make as the one that was stolen from me a few years ago! I think I’ll mostly use it for non-kid cargo, but hope to loan it to friends to use for kids and non-kid cargo, too. Bike: Surly Big Dummy. 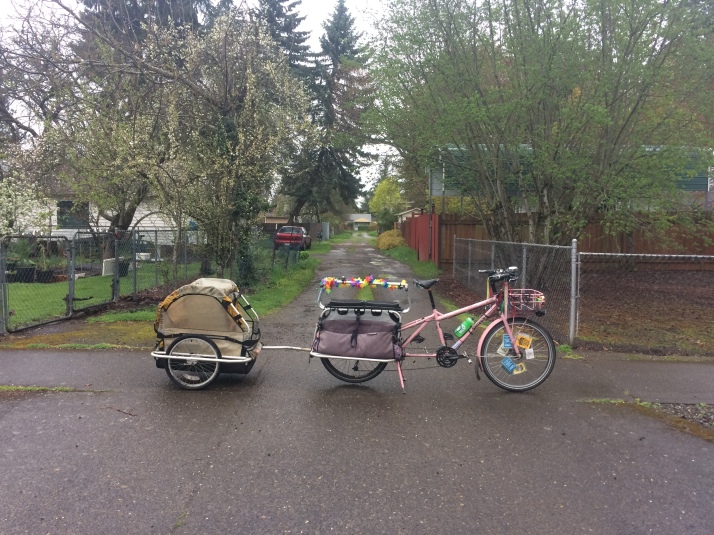