Come be a part of history:

Kidical Massive
Kidical Massive is ALL THE KIDICAL MASSes at once: “The biggest global family bike ride EVER!! Join us as THOUSANDS of families around the country go for a bike ride together. We’ll be showing that Kids are Traffic Too and that cities that plan for family biking are more livable, sustainable, profitable, and FUN! Make a ride in your community happen; register your community and start planning your event.” 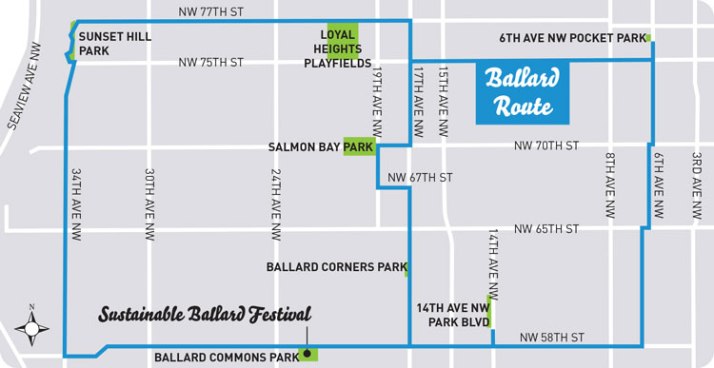 UPDATED SIMPLER ROUTE (but I’m leaving the original details below because riding 67th is cool): East along 70th from Salmon Bay Park, right on 17th, left on 58th, U-turn at 6th, back west along 58th to Ballard Commons Park. Boom.

We’ll follow the blue line south from Salmon Bay Park, including the two-block jog east along 67th that cuts through Salmon Bay School, which I remember thinking was so cool and sneaky when we rode it as part of Seattle’s second-ever Kidical Mass in June of 2009. Then we’ll follow the NW 58th St Greenway (I used to call this “The Ballard Greenway” but now that there are two Neighborhood Greenways in Ballard, I’ll have to clarify with a street name!) all the way east to 6th (since it’s the sixth anniversary of Kidical Mass in Seattle)…but if the kids aren’t feeling it and don’t want to do the last uphill-ish block, it’s cool if we turn around at 7th (since it’s the seventh anniversary of Kidical Mass proper). Then we’ll head back west along the 58th St Greenway to Ballard Commons Park for the Sustainable Ballard Festival.

We’ll officially end at Ballard Commons Park, but continue to explore Summer Parkways–we’ll only have covered part of the whole event with our ride.
Or if you’re in need of doughnuts, I have a feeling a lot of us will backtrack along 58th to 17th to head south a couple blocks to the brand new Mighty-O Donuts. They accept Bicycle Benefits! And then we’ll most likely migrate a bit farther south to kid-friendly Peddler Brewing which has indoor and outdoor seating so it will be fun in any weather.

But wait, there’s more! At 4:30, head over to the nearby Summer Social for Familybike Seattle (you’ll need to be a member of the Seattle Family Biking Facebook group to see the details of this event).

Arrrrrggg!! SO MUCH FUN I CAN’T WAIT! Oh yeah, it’s also International Talk Like a Pirate Day and some of our fellow Kidical Masses are rolling with a pirate theme. Please feel free to come as pirates if that’s what floats your boat.

I'm teaching an in-person, outdoor bike commute clinic tomorrow--you should come! The news will be there, too, since this is such a big deal! ...or b/c it's good fodder for "soaring" gas prices driving (<- lol) people to use bikes instead of cars.