Welcome to the last day of 30 Days of Biking! Here we are all loaded up for the morning school run…well, after the seven-year old sat down, the four-year old unhid himself, and I retrieved my helmet from the neighbor’s porch (I use it as a tripod for these TimerCam photos, iPhone wedged in a vent).

It was a weird morning. I thought the warm sun would make everyone happy and calm, but I saw a lot of odd behavior. This woman in the minivan drove two blocks partially in the bike lane. I thought she was preparing to turn right onto Troll Avenue (not that that makes this OK), but she kept going straight. I was more peeved than normal because I almost got doored right there yesterday. My first near-dooring, by the way–silly me for not realizing the driver of the wide truck, just pulled in and still a foot from the curb with motor running was done parking and about to open his door. I usually ride clear of the door zone, on the left edge of the bike lane when our bike lanes are painted partially in the door zone (*I say usually because when I’m going slow enough uphill that I can see into each and every car it’s not such a big deal–I can slow my crawling speed to a stop if I see a door opening). I’m hoping I scared him enough that he’ll look from now on. A gal can dream. I didn’t have either kid on board so I’m not nearly as shaken up by it as I’d otherwise be. Anyhow, I was peeved and slowed next to her minivan to look in the window and see if I could figure out what was going on. She didn’t even notice me or feel my *mom stare*. Sigh. 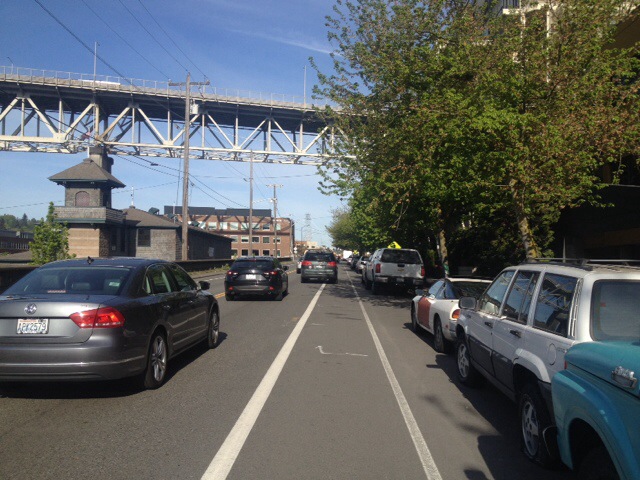 Then this in the bike box. But it gets worse! At the red light a woman on a bike charged in front of me and started making a left turn into that cross walk (that light was no longer green, by the way) when our light turned green and the car started moving forcing her to stop her weird maneuver and nearly tip over onto me. She collected herself and darted in front of the straight/right turn lane to get to the sidewalk. At least she made me forget about the minivan.

No more weird incidents on the way to preschool. And one of our little classmates had arrived by trail-a-bike! Two families occasionally bike commute and it just makes my day.

Then on the way to our elementary school dropoff, the guy in the red shirt said, “I commend your choice of mode of transportation” as he passed us. Aw.

With the kids away at school and time to myself, I headed over to Hub and Bespoke to be part of a TV shoot for Seattle Channel about being fashionable while biking. Ha ha, I know, me?! I didn’t realize that was the subject, obviously. Thank goodness I had changed out of those flip flops from the top picture. They said I did fine. (I’ll believe that when I see it!)

It’s always tempting to do something epic for #30daysofbiking and I hadn’t done anything above and beyond yet so I tried to ghostride my seven-year old’s bike from my old mamabike as I readied us for a dentist appointment. It didn’t work. But laying it on top of the Bobike Maxi rear kid seat worked fine for the three-block ride to school.

So I locked up the kid bike at elementary school, grabbed the preschooler, came back for big kid and his bike, and we all rode to the bus stop. Our dentist is 20 miles away in Issaquah and sometimes I drive, but usually we bike and bus because although it’s time consuming, it’s much more fun. I didn’t have the option to drive today since our car is at airport long-term parking while Mr. Family Ride is away for the week, but I looked into Lyft to see if getting a ride was reasonable. I figured that would be just the epic sort of thing to close the month with–actual practice at being car-free. But it looked pretty pricey for a 20-mile trip and I’d still need to find car seats to borrow (and install, and uninstall, and install, and uninstall again). But hey, look: Uber is start a family-friendly service in New York.

So we took a bus downtown and walked our bikes one steep downhill block to the 554’s stop. It was all going great until the bus wouldn’t let us board because the bike rack was broken. Doh! But no worries as we had a 20-minute cushion.

So we hung out and snacked and watched most of the bicyclists on 2nd Avenue take the right lane, though a couple braved the 2nd Avenue Bike Lane of Death. And then one minute before our bus was due, both kids declared they needed the restroom *now*. So we saw the bus come and go as we went in search of a potty. The first Starbucks was bathroom-less, but the second Starbucks delivered…but now it was only six minutes until the next-next bus. Which we made, amazingly.

Then we biked 1.5 miles from the Transit Center to the dentist. Up until this point, it would have been easier to travel without the bikes with the first bus stop a block from home and the transfer just a block away (not to mention the broken bike rack). But not having to transfer to a third bus (I can’t even imagine!) and riding the Issaquah trail system (and a bit of the Issaquah sidewalk because I didn’t want to put a kid on the bike lane of busy Gilman Avenue was awesome.

The bikes came in handy after our dentist appointments (which we were 30 minutes late for which meant my cleaning got put on hold…I guess that’s nothing to complain about!) for riding a mile to dinner, with a pit stop at Bicycle Center of Issaquah to see Dillon the dog.

And then it was a two-block ride to the bus stop…where the same broke-bike-rack bus arrived! It didn’t even occur to me that the lame bus would still be out driving around. Big bummer because I had scheduled us to connect to the last express bus that took us close to home and I’ve never done any bus planning on the fly–it’s so much easier on the computer than my iPhone. When both kids fit on the old mamabike we biked to and from downtown so there was no transferring, but I didn’t want my seven-year old biking downtown, especially now that we were in rush hour. This probably wasn’t the quickest way, but we got off at the north-most stop of the next 554 and grabbed our slow local bus a block away.

And those extra 20 minutes at the Issaquah bus stop and the eagle statue with the sharp talons and beak did not result in any bloody fingers this time. Lose-win, I guess.

So I guess the last day turned out to be pretty epic after all. And looking back at the whole month: while I rode in our car back from dinner on the 15th, I didn’t drive all month. So that’s something new for 30 Days of Biking!

Aw Pixie you don’t get to ride with the pie 😢