We started our day with a quick spin through the I-5 Colonnade Mountain Bike Park which was much too hard and we mostly just walked our bikes around. 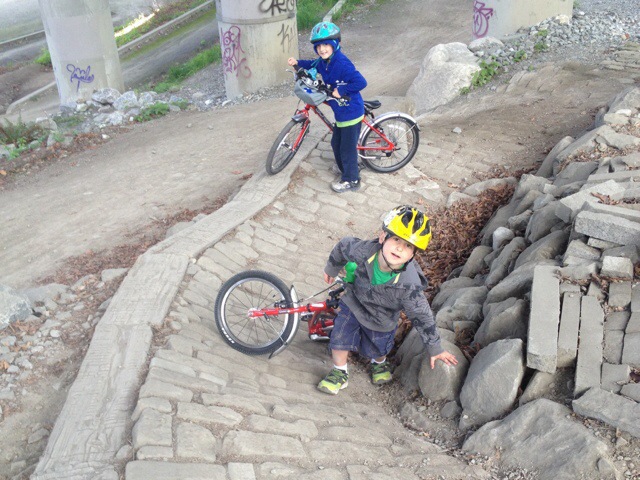 But our real destination was Cal Anderson Park to meet up with other family bikers–the Colonnade was a not-very-restful rest break on the way up. Our short-notice play date didn’t attract a big crowd, but Davey Oil and kids came on Blooey, the amazing one-of-a-kind Xtracycle EdgeRunner cycle truck conversion with Stokemonkey e-assist.

This morning I had forgotten about my broken FreeLoader bag strap and carried one of the kid bikes by tying a knot and reinforcing with a bungee cord. The other day, Davey mentioned he had extra straps at the shop–G&O Family Cyclery–so I was going to try to make it in this week, but he gave me one of the straps off his own bag. What service!

Tom of Seattle Bike Blog came by, too, and we all rode to City Hall together to watch the City Council vote on the Bicycle Master Plan.

There were balloons and cake! 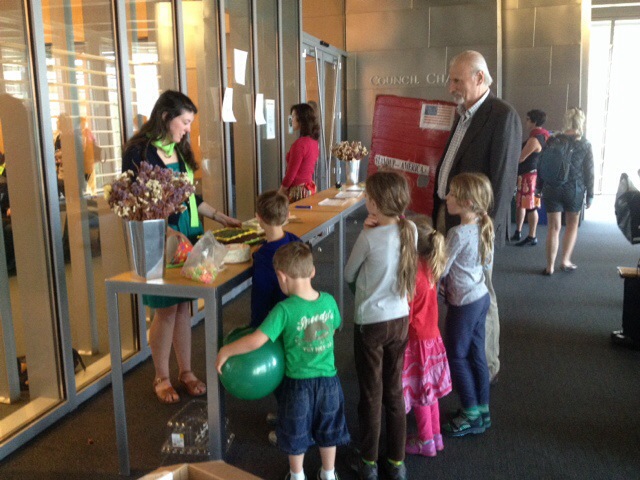 And it passed unanimously! The kids celebrated by biking up and down in front of City Hall–today on the sidewalk, but perhaps someday while they’re still kids in a protected bike lane. 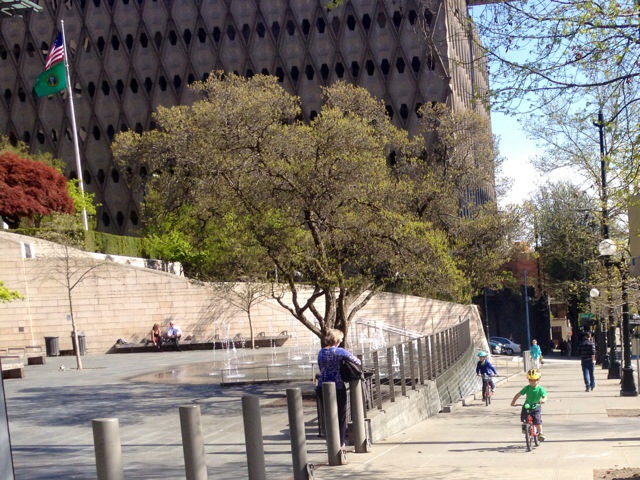 But for the time being, our downtown travel is like this, everyone on the mamabike: 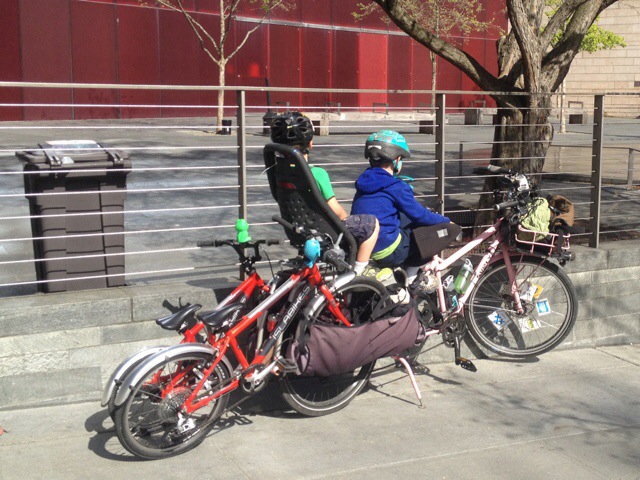 I let the kids ride their own bikes again when we got near the Elliott Bay Trail. We took a break to climb on the Parking Squid bike rack across from the Seattle Aquarium and I saw my friend Rebecca ride by. I feel bad hollering at and distracting friends while they pedal by, but I just can’t help it. Rebecca looked back and made a very safe u-turn to come hang out for a bit. By the way, she’s got a great project: Seattle Bicyclist Portraits. If she doesn’t find you and snap a picture, submit one! 10″x10″ 100 dpi photos sent to rebeccabikes[at]gmail[dot]com

We rode together a bit and just as I was telling her I’m much more relaxed about riding with both kids at the same time, they slammed on their brakes right in front of us. They heard the Sounder train coming and wanted to be ready to cover their ears. Rebecca convinced them to wave, too–cute!

The six-year old rode the whole way home–9.8 miles! The four-year old was off and on the mamabike. They both made it up the bridge in the rail yard. I was more impressed that the four-year old went down the other side. He said he wanted to walk, but changed his mind (I may have planted the seed that it wouldn’t look as steep once he got there and took a look) and coasted very slowly and cautiously.

He made it up the hill out of the rail yard, but that was enough riding for him and he insisted on hopping on the FlightDeck before I had a chance to realize I didn’t want both kids riding on 30 mph Gilman Avenue.

Did you notice the bicycle ballet leg above? There was a lot of that. And a lot of feet up on the frame. It was an incredibly slow ride home. I am a much more patient person now than ever before, but I did my fair share of urging him to pedal more. 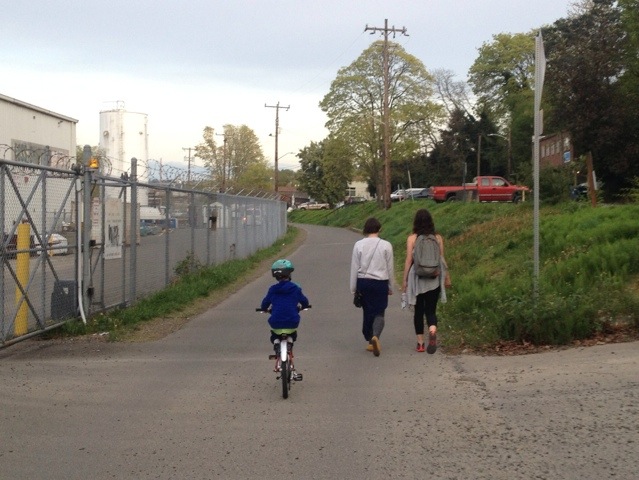 I took a little video of part of our Elliott Bay Trail trip because those tiny legs spinning on those teeny cranks crack me up. It was funnier when he was on the 12-inch bike with even teenier cranks.