Both kids bike-ily delivered to school, I headed to Fremont to meet up with my friend, Alyssa. We often ride our fast bikes when the kids are all in school, but today we were both on our slow longtails. On the way over, I happened upon Barbara and invited her along. Behold our trio of kid carriers: Xtracycle, Surly Big Dummy, Kona MinUte. Yay! 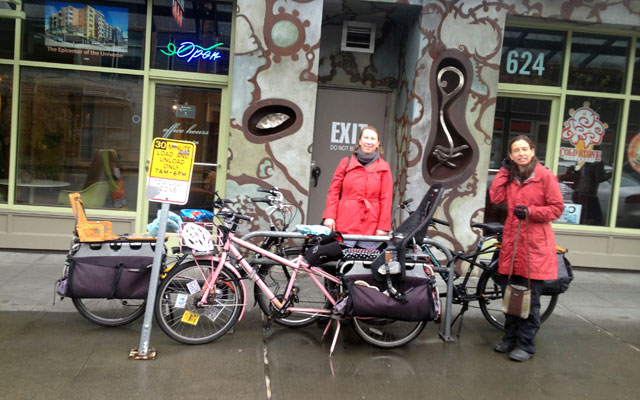 After several days of sun, I’m never prepared for rain. This is Seattle, so I should know better, but it always happens. Must be an innate Southern-Californian-transplant survival technique. The kids were indoors and fine without rain gear, but I was getting progressively damper. I swung by Alyssa’s after our ride (to Goodwill to look for waterproof fabric for one of her fantastic DIY projects) so she could let me use her new rain skirt. It’s awesome! This one is oilcloth, but she’s planning another one with a lighter fabric. Note: if you want people to touch your clothing, wear a waterproof skirt on a rainy day. It was very popular. 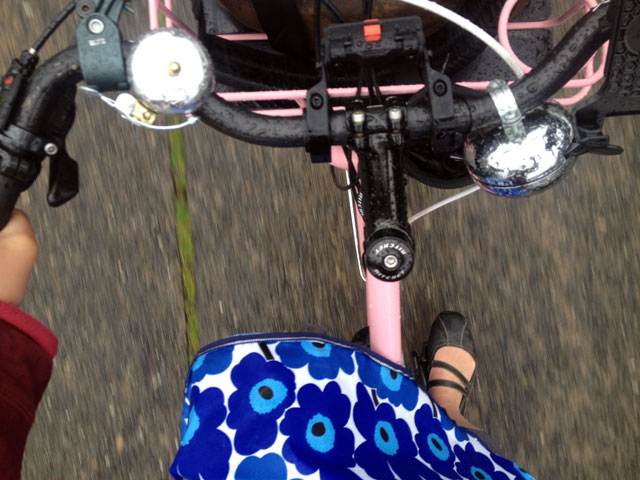 Back on the Burke-Gilman Trail I noticed Cascade Bicycle Studio has moved into its new space–by the mama dinosaur and baby dinosaur foliage and next door to The Indoor Sun Shoppe (where you can test out a sun therapy lamp for 20 minutes if you’re having a rough rainy day). I don’t think they get a lot of cargo bikers in the shop, but they kindly let me and my rig drip on their floor while I checked out the new space. It’s big and airy and filled with fancy stuff. They were intrigued by the white cable on my bike–because they couldn’t figure out what it was for–so I demonstrated my Rolling Jackass centerstand. And then I told them about the guys who rode a Madsen bucket bike in a cyclocross race to try to bridge our two worlds. I think it worked. But if CBS runs cyclocross clinics in the fall (they’re thinking about doing so!) and I attend, I’ll bring my cross bike and not my cargo beast.

Then I popped into Free Range Cycles to stick a Pedaler’s Fair flyer on their community board. Free Range’s Kathleen was just written up in OutdoorsNW Magazine (So was I, so they’ll put just anyone in there, but Kathleen is the real [steel] deal). Alex was working on an Xtracycle. I hate to break mechanic/bicyclist privilege, but I bombarded Alex and Kathleen with questions. The owner is an artist who uses it to transport canvases these days since her kids are too old to be cargo. I’m intrigued by non-human-cargo cargo bikes. I expect to have one someday.

Those first two stops were impulse stops, but I eventually made it to Hub and Bespoke to check out caps. I found a great little Ibex wool cap that fits under my helmet. And the ear flaps fold up if need be. 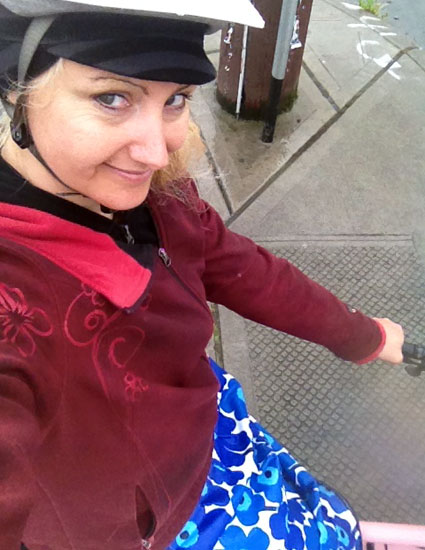 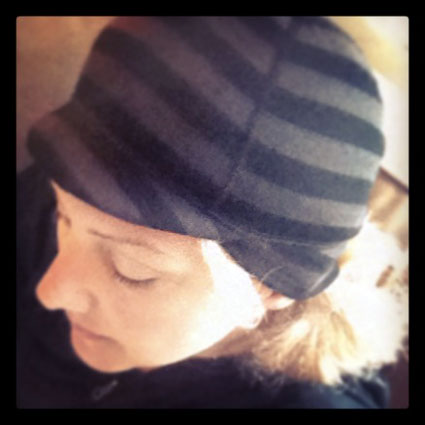 Hub and Bespoke also has a funky VANMOOF on display. I’ve never seen one in person, but J.C. Lind seems to sell a lot of them as evidenced by his Facebook page updates. I’ve only seen pictures of their profiles so it was surprising to see the lights integrated into the frame. I still think they look weird, but weird with function. The H-and-B VANMOOF is from Charley+May, “located on the top of Queen Anne Hill.” I think I’ll suggest to Alyssa we use that as a future kid-free bike ride destination…but with our quick bikes.

12 thoughts on “Riding with friends”