Last weekend Spokespeople conducted a Kidical Mass ride to several Wallingford Little Free Libraries and then the “Sundays are Special” celebration at our local library. 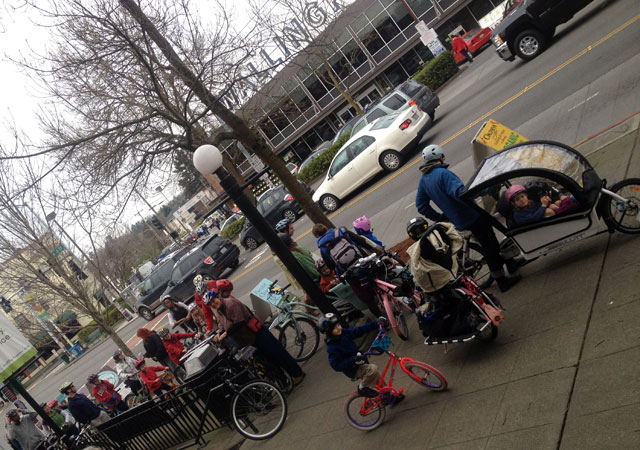 Only one of the ride’s four LFLs regularly has kid books so in the dark of night, the eve of the ride (conveniently during Earth Hour), I stocked all four with our to-be-donated books. It worked great, except we naturally ended up taking several of our books back home–“Hey! We have this book at home already! Now we’ll have two!” Uh, no. Also, I didn’t have many good choices for the older kids on the ride so next time I’ll stock up on a variety of books before secret mission night.

We were about three dozen riders and wanted the ride to be accessible to kids. The original route was three miles, but it was hilly for me, so Cathy Tuttle of Spokespeople okayed my lopping a mile off. Even still, I considered reboarding my five-year-old pedaler for the second mile since it was slightly uphill and 16-inch single speed bikes aren’t so great for any hills. The shortened ride meant we skipped the Poetry Bench so I recited a few bike-themed poems while we massed up to make up for this, including a limerick of my own creation:

I once met a bear on a bike
who needed directions to 1st Ave and Pike.
Parked by Rachel the Pig, did that bear.
Grabbed thrown salmon right out of the air
while fishmongers looked on with dislike. 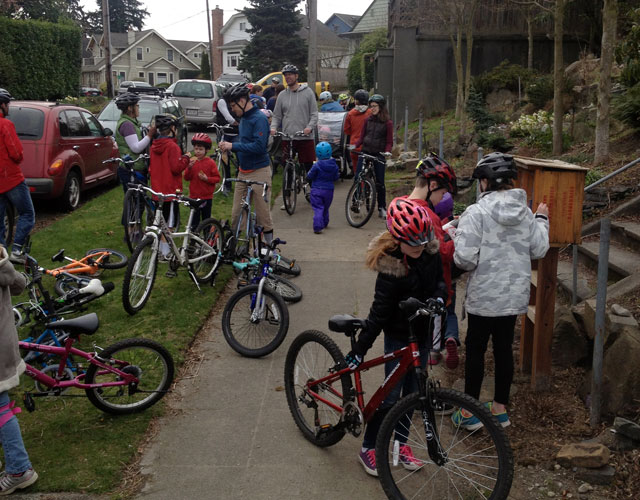 My kiddo ended up riding the whole way–we were the sweeper(s) for the first half of the ride, but led the second half and he didn’t want to stop being the bike train train engine, understandably. I gave him a couple boosts along the way–I really need to work on that, by the way! I know several family bikers who are capable of riding in a straight line, one-handed, while leaning down and to the side to propel a little one along. But the bigger lesson was that this ride was a bit much for the smallfolks. The incline wasn’t fun for many of the smaller kids and the door zone was worrying for us big people.

The Spokespeople SPOKESKIDS page has some great tips about biking with kids, including:

And 8-80 Cities is a wonderful nonprofit that uses eight as a safe age to aim for as road ready (assuming those roads are made safe enough). BUT we will organize a smaller and flatter ride for small pedaling kids because even the two-mile ride with tricky intersections was big fun!

We had one non-kid passenger along on the ride. A group of UW engineering undergrads are working on a very cool e-assist kit for an Environmental Innovation Challenge (I think Wheelha.us and/or LionTail Cycles will have details next month) and brought a cameraman along. I hope some of the kids made it into the background of his footage. Kids sell!

And then the ride was over and life returned to normal and the kids rode home on the sidewalk. 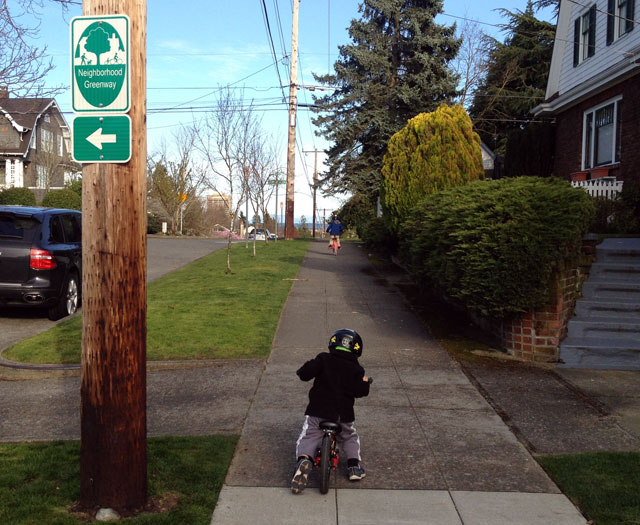 7 thoughts on “Little Free Libraries ride with KIDS CYCLING IN THE STREET!”