I managed my first two-bike tow with the Big Dummy! 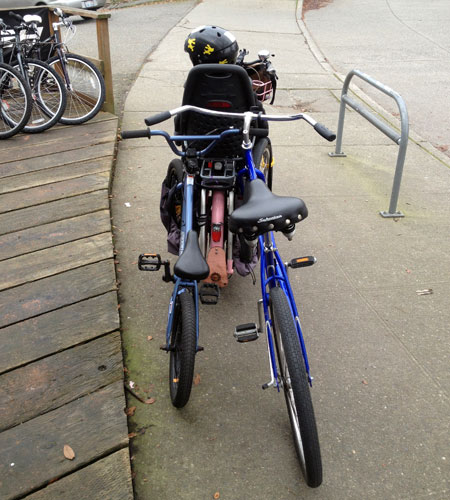 I set out with [most of] just one bike–I had borrowed the squishy seat from Mr. Family Ride’s beach cruiser in June when I was between Brooks saddles and apparently lost part of it. It seemed like a good day to have it repaired. I got a lot of great comments on my Gimme your ice advice post, including Matt of Tacoma Bike Ranch’s account of riding his beach cruiser on ice. My beach cruiser is much too pretty to subject to dirty ice, but if I can sneak out without the kids to experiment, I’ll try this bike. 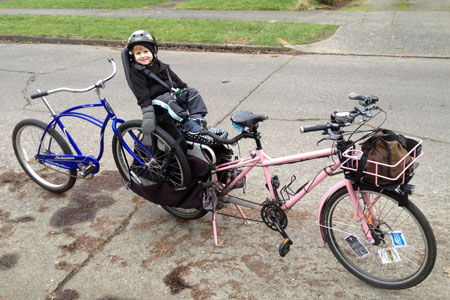 It was also fairly exciting because I missed my first opportunity to tow a bike a year ago when retrieving this same beach cruiser from a friend’s house.

Recycled Cycles quickly put the beach cruiser back together, but we weren’t in and out quickly enough for me to resist browsing the used bikes and spotting an 18″ BMX bike. I think a BMX bike is not exactly the same as a regular kid bike so maybe it wasn’t the smartest impulse buy, but it has a hand brake (just rear) and is a bit bigger than my five-year old’s 16″ bike. It’d be nice to get him used to a hand brake before putting him on a 20″ bike with gears (gears!) with which he can hopefully do some major riding around town. They had to change out the seat post for a shorter one (first clue that it’s not sized for tiny guys), but it seems to fit him well enough.

I also have Tacoma Bike Ranch to thank for the tip to get some ratcheting packing straps for loads that are too big for bungee cords (this, after the box spring fiasco). But they were at home in the garage so I made do with a bungee holding the beach cruiser in place. 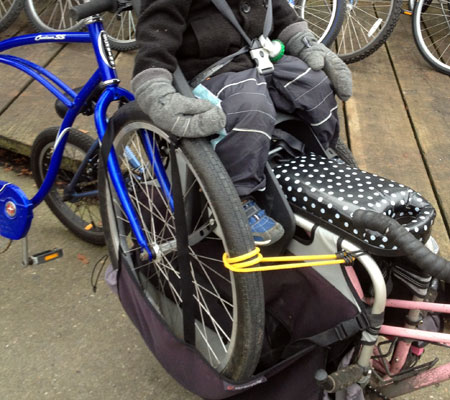 The bikes traveled well. I had to stop after one tight right turn to separate the wheels, but that was it. Had I traveled on the road and path only, I would have been fine, but there’s a great shortcut to the Burke-Gilman Trail if one crosses Pacific Street and travels 100 feet on the sidewalk, but the sharp right turn onto the narrow sidewalk was a lot to expect of my hastily crammed in load.

We did it! We made a unicycle rack out of an old car trunk bike rack from the thrift store! The rubber straps for the cradles are really old and tough so this is just a prototype that’s too hard for any of us to easily use, but woo hoo!