I ignored today’s crap forecast and loaded the bike with beach gear, picnic, and balance bikes for Alki Summer Streets. I put the boys in sandals (with socks because that’s how we Seattleites roll) and wore my new used sundress that was too summery for Friday. Here’s the best picture my five-year old took of the beach bike and sundress–right before his “finger in front of the lens” series.

I left the house half an hour later than planned, but decided waiting an extra half hour for the next water taxi would still be quicker than biking the whole way there. This time a crewman helped me maneuver the Big Dummy through the small opening and next to the bike rack.

I think the nasty weather kept many of the booths away, but we visited the fire truck, ogled the cats in the Seattle Humane Society’s MaxMobile Adoption Center, decorated balance bikes at the Cascade Bicycle Club bike decorating station, and best of all: my five-year old was invited by Cascade to lead the Seattle Police Department Kid Bike Parade…or as he saw it, he was the engine of the bike train with five police cabooses.

Here’s video of the parade from West Seattle Blog. The police officer with the decorated bike is the one who foolishly left his bike unattended with his fellow bike cops near the bike decorating station.

At the Cascade booth I picked up a pamphlet for Cascade Bicycle Club kid bike classes and camps and assuming the kids pick up pedaling, we’ll enroll in a camp or two (or all of them!) next summer. 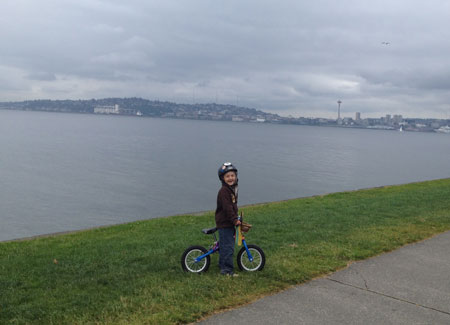 The trip home was slow going. In theory, I like the idea of the kids riding alongside me, but in practice, it’s nerve racking! The little kid opted to sit on the mamabike for the parade, but he wanted to ride to the water taxi with many many stops to say he was too tired, but after a ten-second rest he was raring to go again.

It was nice (but also nerve racking) having them wheel their own bikes down the floating ramp to the water taxi.

I was hoping they’d want to be passengers after the water taxi crossing, but they were determined to keep at it. Despite the weather, the waterfront was crowded and it was not fun chasing after the two kids. Really not fun was when in my distraction at riding and overseeing, my wheel slipped alongside the metal rail of a tree planter and I had my first crash on the Big Dummy. Not fun at all! I scraped up my left foot and ankle, and somehow my right knee, but was up in a matter of seconds. The toddler took a couple rests on the mamabike, but kept wanted back off to balance bike after his brother again. 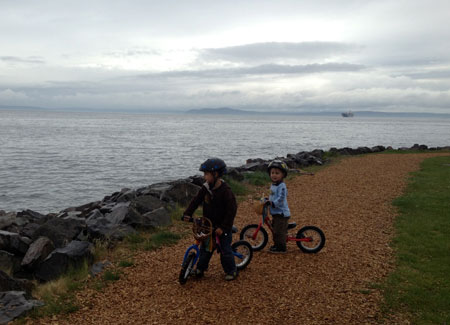 I finally got them back on board before crossing the street away from the Elliott Bay Trail and into the train yard. Not because they had finally tired, but because I thought the path was too narrow for them.

I was getting pretty grumpy as the adrenalin from the crash wore off, knowing we still had six miles to go and a stop at the grocery store to pick up cold medicine and soup for Mr. Family Ride. But outside QFC I saw a happy sight: an old Centurion road bike with a plastic bag containing a six pack of beer tied to the top tube and a seventh bottle in the drink cage. I offered its rider a nylon shopping bag, thinking it might tie tighter and stay stronger, but he was stubborn and wanted to stick with his plastic bag. That made me happier, too. Stubborn kids: not fun, stubborn beer biker: cool. 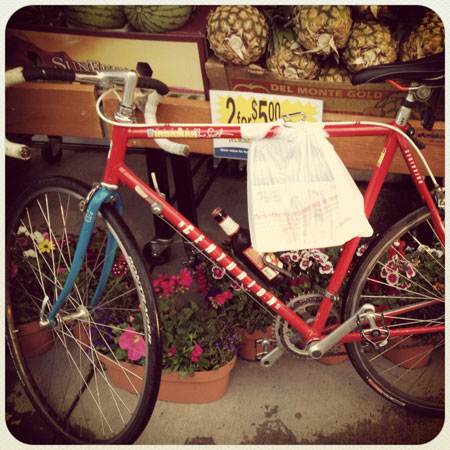 So glad this sign by the high school’s side door says “__ BIKE PARKING” so my student can park back here and avoid the unending line of cars that snakes around to the front door where the real bike racks live.