Today was glorious! I remember what summer is like now. So did everyone else–everyone was out on bikes and smiling uncontrollably. We loaded up the bike with beach toys and gear rather than balance bikes today (although I’m sure one of these days I’ll figure out squeezing on both–more bungees!) and headed towards Ballard. We ran into Flower Pedal Powered Family heading the other direction on their Big Dummy on the way. Seattle’s a big place, but I love when it feels small. It certainly helps matters to get around by bike–so much more to see this way.

We started out at the Pedaler’s Fair again, this time taking time to look around. We saw everything, though briefly. And I accomplished my two to-do items: I met Ann DeOtte of Iva Jean and creator of the Rain Cape. I’ve been meaning to submit some Seattle Rides to her site. Now that it’s sunny I hope to get my act in gear. And I talked with Tarik of T’s Leatherworks about his pink leather mud flap. In the four months I’ve had the Big Dummy, the cross bar at the back has picked up earthworms three times. Eww! No more of that. He still needs to add the metal rivets to the flap, but soon it’ll be mine! 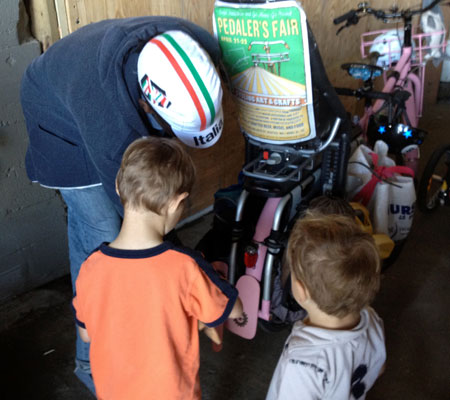 I saw a cool light idea in the bike parking area. Of course it only works well if you have skinny tires that won’t obstruct the glow. It wasn’t her main rear light, it’s just for added pop. Plus it’s blue! 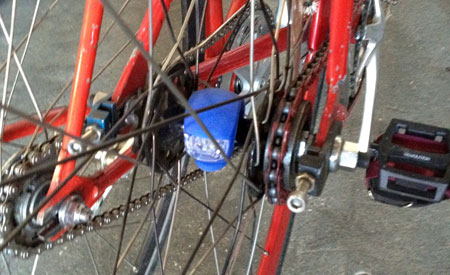 And parked outside was this homegrown recumbent:

Then we headed over to the Ballard farmers market where we found ourselves riding alongside the organizer of Messmann’s Messquerade Halloween Bicycle Scavenger Hunt & Costume Contest. He was riding with his toddler so I told him about the Seattle Kidical Mass rides in case he wants to balance his freaky riding with family riding. At the market I spotted an Xtracycle sporting a Madsen seat. Mix and match cargo bike parts! Love it. 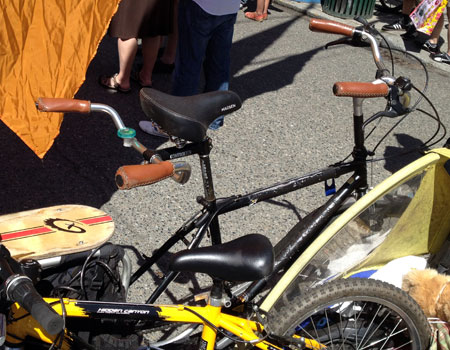 On the way to the beach we met the owner of BoatHouse Cycles motorcycle shop. Turns out he does bikes, too. Yesterday we saw a loud motorized bicycle that sped by as fast as a car. I have a feeling that may have been his work. I showed him my motorcycle clock since it’s one of my favorite feature on my bike (but of course every feature is my favorite feature on the Big Dummy). I mentioned that several people have seen the baby seat fairing on my old bike and asked if I knew where one could get an adult-sized one. Good news: BoatHouse Cycles has built these before.

The beach was packed with no car parking spots, but still some room at the bike rack. 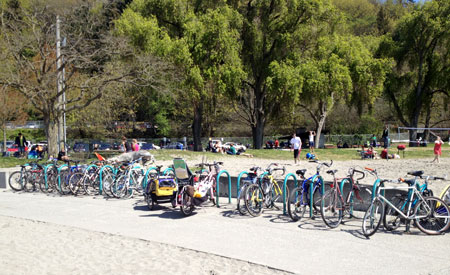 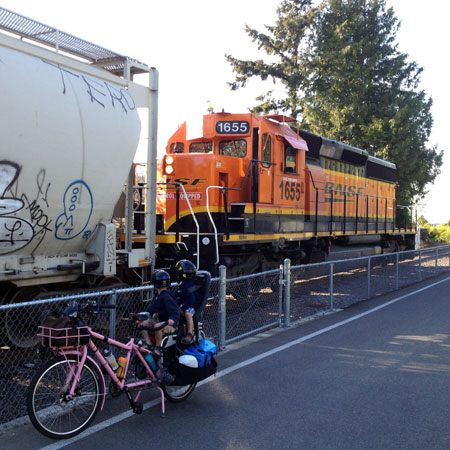 Then we noticed the old red engine missing from its usual parking spot along the missing link and soon saw it chugging along, too. I wonder if I’m the only biker to have waved at the Ballard Terminal Railroad (Salmon Bay Sand and Gravel owns the railroad and runs it just often enough to keep the rail line in working order and prevent the missing link from becoming part of the Burke-Gilman Trail).

The last bit of excitement came when I lost a flip flop on the ride up Stone Way. A kind pedestrian retrieved it before I had a chance to engage my center stand. I love my blinky pedals and that they’re grippy, but the grippiness doesn’t work well with flip flops. (Of course it’s the pedal’s fault and not the operator).