We finally made it over to see The Quad’s famous cherry blossoms. It’s been a bit windy so we missed the peak blossominess by a few days, but it was still beautiful. A friend went last week and mentioned it was a good site for kid bikes so I brought the balance bikes along and we did some picnicking and some riding. 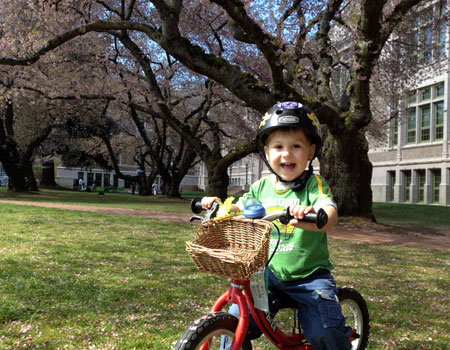 There were lots of people around, including four wedding parties being photographed, but still plenty of room for balance biking. And there are strips of small rocks alongside the buildings for those with rock enthusiasts. 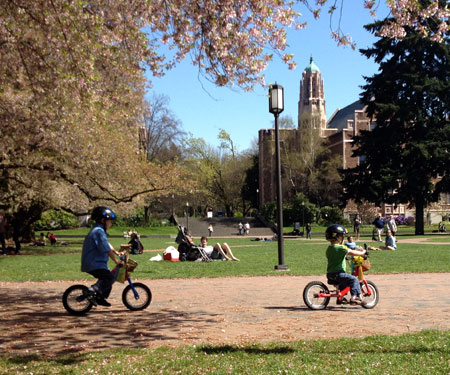 We rode our three bikes separately to the edge of The Quad at the end of our visit (still a rare occurrence, riding separately, so lots of fun for me) where the boys discovered a flight of very shallow stairs they could ride their little bikes down. And it offers a nice view to give an idea of the size of the whole area. 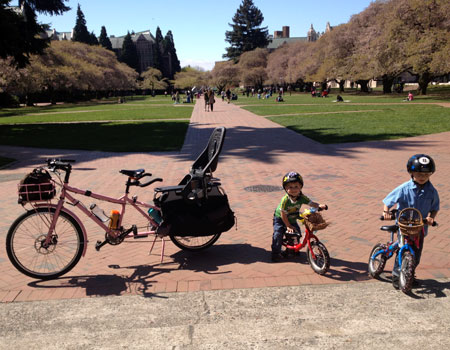 We’ll be back for picnics in the summer, but I’d like to visit campus on a weekday during the school year because I want to see where people ride their bikes. I couldn’t tell if I should share the narrow roads or stick to the sidewalks.

I didn’t have much spare space on the bike, but we swung by Trader Joes for a few items that fit in the front basket. I wasn’t too excited about the Trader Joes stickers on my Brooks saddle. I actually said, “Mama’s bike seat is too fancy for stickers. Let’s take them off.” Fortunately, they didn’t leave any sticky gunk behind.

I didn’t plan for an additional stop, but Trader Joes had pulled pork at their sample station which left me needing a Scratch Deli food truck fix. In a stroke of brilliance, I shoved our water bottles into the FreeLoaders and put the sandwiches into the bottle cages. The cup of potato salad fit in my basket’s cup holder. I believe my frame has a fourth set of braze-ons. I should probably attach a cage to that set, too.

I left the kids home with Mr. Family Ride for a few hours in the afternoon and rode to Ballard for a hair cut. I took the Big Dummy, intending to go by Fred Meyer for a bunch of stuff on the way home, but when I called to check in, he sounded a bit overwhelmed. Not surprising, considering his back’s not much better yet. I was hoping the kids would want to come back out with me, but with early wakeups and no naps these days, our evenings end pretty early. In another stroke of genious (two in one day!), I headed out solo once everyone was asleep. This is only my second time shopping solo in five years. It’s so quiet! I was tempted to practice shopping with one of the hard-to-maneuver kiddie car carts (if you’ve also wondered when you have to show up to find a vacant one, it’s 9pm on a Saturday night), but I came to my senses and shopped like a normal kid-free person.