I can’t wait to take the Big Dummy to the beach and bring every sand toy we own, but today we went out on the Milano so I could get a new kickstand at Dutch Bike Co before hitting the beach on this first temperate day of the year. We had snacks and played with Don Juan, temporary shop dog, while his uncle Lance installed a Velo Orange Porteur Double Kickstand. I liked my previous Pletscher Two-leg Kickstands, but considering I’ve gone through two of them, it’s probably a good idea to try something new (plus Dutch Bike Co has decided to stop carrying them). 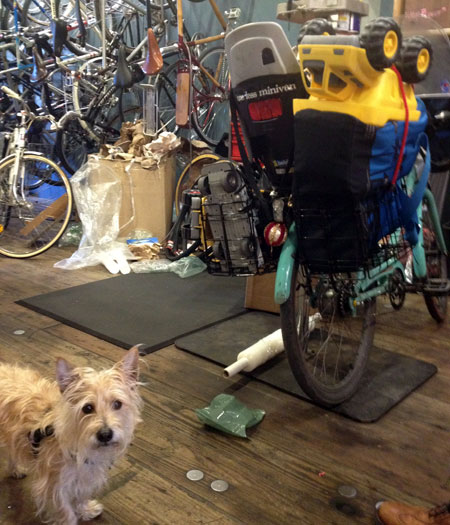 The beach was great. A bit on the cold side–somewhere above 50 degrees with a slight breeze–but very sunny. I downloaded Instagram so I can take postcard-y pictures now: 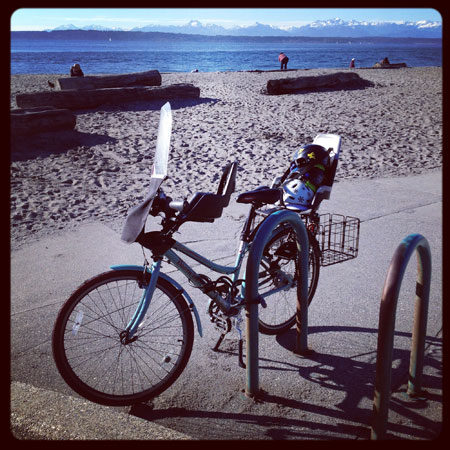 The slight breeze helped me discover that the new kickstand is not as good as the old kickstand was (before it broke in two, that is). I had to hold the bike upright after unloading one basket and even once I had everything off and thought things were steady, it tipped over. Thank goodness there are millions of trees in this city so I could prop the bike up for safe and easy reloading. 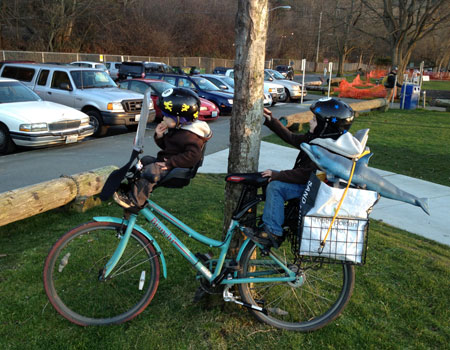 On our way to the beach we noticed a train table through the window of Snoose Junction Pizzeria so we stopped in for dinner. The place is full of bikes and trains! Unfortunately it no longer is also home to the Addams Family pinball machine which I had heard moved here from Sock Monster (where I also didn’t get around to visiting it in time).

It was dark by the time we left Snoose Junction, but Dutch Bike Co was still open so we swung by to have the kick stand taken off while it’s still in resellable shape. When I can get back in, they’ll put a super duper double kickstand on–I think this Hebie one, which comes on the WorkCycles Oma and Opa bikes.

I should have bought a spare front light while I was in the shop, but I didn’t want to pour most of my store credit into something other than the new pricey kickstand. I didn’t think we’d be out past sunset and I have yet to find a way to attach my Planet Bike Blaze effectively. I’ve had it down on the fork, but it aims up in the air, blinding pedestrians. I don’t have any handlebar room thanks to the Bobike windscreen, but there’s a light cut-out in the middle of the skirt so I’ve been meaning to find a way to poke it through there. But for today, we rode home with only a rear light. I was surprised and embarrassed to be the only bike with no light–even the runner we passed sported a headlamp. We took the Burke Gilman Trail, which is well lit between Ballard and Fremont and then up Stone Way’s bike lane, which felt fine with just a rear light since the cars only saw me from the back and there’s little side street traffic. At the top of the hill I switched to the sidewalk. It was probably nicer for the pedestrians I encountered that I didn’t shine a bright light at them. There wasn’t much foot traffic on 45th for a Friday night and we cruise at close to pedestrian speed so it worked well. But lesson learned and I’ll make sure I’m all lit up before taking the Milano out again, no matter the time of day.

We did it! We made a unicycle rack out of an old car trunk bike rack from the thrift store! The rubber straps for the cradles are really old and tough so this is just a prototype that’s too hard for any of us to easily use, but woo hoo!