I love that our preschool commute involves going over a drawbridge…except it’s often up when we’re running late. I need to work on my on-time performance if I want to inspire other families to start bike commuting. This morning’s drawbridge delay made us ten minutes late, but we got to see a very exciting big blue boat. One of our little classmates was meanwhile stuck in her car, but much too far back to see the boat. Not only do bike commuters get to enjoy the view in the canal, but I also saw three riders exchange introductions during the wait.

On the way home, I had to wait for the drawbridge again–that was a first. The traffic lights cooperated nicely and kept all cars away while the bridge was up. It was so peaceful with no idling cars sharing the road. I daydreamed about how nice it would be to have a bridge just for bikes. 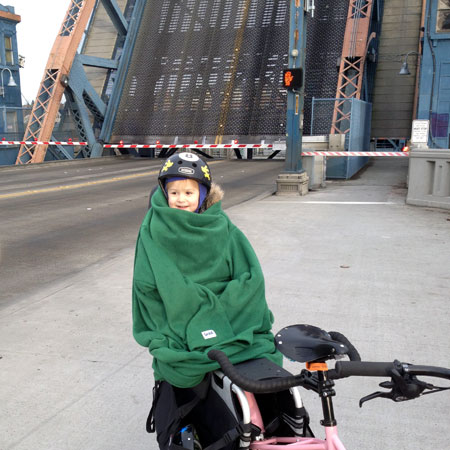 The afternoon was cold, but clear, so we took the balance bikes out. I normally prefer to haul the balance bikes to a spot where I can sit while they ride around, but a friend is visiting (this time without her bike) so we let the boys lead the way. They led us down two flights of stairs to the water by Ivar’s Salmon House.

Yes, the stairs really are as steep as they look in the picture–I was impressed the boys were able to negotiate them with their balance bikes. Later, Mr. Family Ride told me he carries the bikes down the stairs for them. Oops. 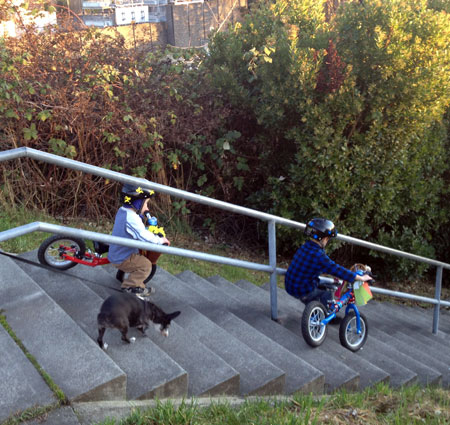 We spent a bit of time throwing rocks in the water (because that’s just as fun as balance biking), but it eventually got cold and we made our way back uphill. 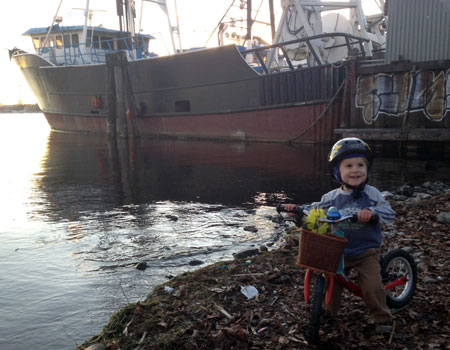 This was my first encounter with Wallingford’s runnel. The two-year old managed to wheel his bike up two steps, but I ended up carrying both bikes the rest of the way up. I’d imagine it works fine for full-sized people, though. Even with my light road bike, I think I’d opt to zig zag up the nearby streets rather than walk up a flight of stairs. But I’m all for runnels in other parts of the city that aren’t as easily conquered by streets. 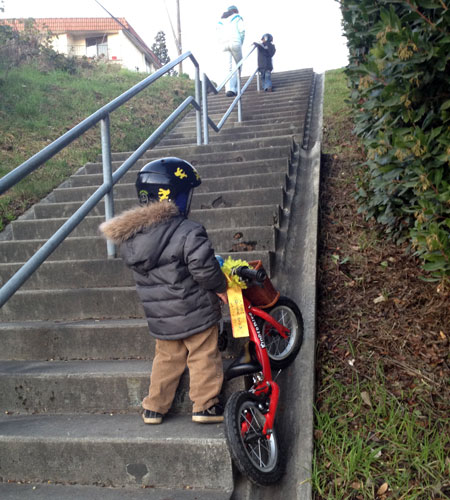 2 thoughts on “Drawbridges and runnels”