50 degrees and sunny made for a great Opening Day of Bicycling Cargo Bike Ride. I loaded up the boys and their balance bikes and Mr. Family Ride secured my sweet new Marlin’s motorcycle clock to my handlebars. As you can see, I was only half an hour late for the ride (meet at noon, ride at 1).

I meant to leave the house at 11 and take the scenic route along the ship canal trail and by the train yard, but we left at 11:45 and braved Eastlake. It turned out to be a good thing because we ran into Claudia on her Xtracycle as she and her son headed west from Capitol Hill. What are the odds? Unfortunately, neither of us had plotted a route to the waterfront, but we did OK with my Seattle Center route.

I have to admit I was a little worried about the ride–especially after a guy with a big trailer on his bike examined my rig and said, “Where’s your Stokemonkey? How are you going to make it up Yesler?” He’d decided to skip the ride and go eat soup. The ride climbed Jackson and it was hard, but thanks to my granny ring I was able to stay in the saddle. I haven’t had to push this heavy beast up a hill on foot yet and hope I never have to. I was by far the slowest up the hill, but I just take that as proof that I was the cargo-bikey-est one there.

Pratt Park was great, with a nice water park come summertime. I’m not sure I’ll make it back up the hill again to see it in action, though. I checked the specs on the balance bikes and they weigh in at 8.9 and 9.5 pounds. So maybe with 20 pounds less crap it wouldn’t be so bad. Unfortunately, the restrooms aren’t open in the off-season–two cargo bike rides in a row with no bathrooms. Quite different from a Kidical Mass ride which takes two-year-old bladders into account.

Jasper’s bike was U-locked to a picnic table at the park, but the key went missing somewhere on the ride over. All that talent and no one could bust the lock. But after much trying, someone had the brilliant idea to take the picnic table apart instead. The bike was freed and while I don’t think I’ll start travelling with table-disassembling tools, a couple zip ties would have come in handy at that point–to pin the lock to the frame and render it rideable.

The party was still in full swing when we hit the road around 4. Actually, we didn’t hang at the potluck much with such an enticing play structure and sand pit on the other side of the park. The ride home included a scenic winding through Interlaken Park. I hadn’t planned a route from looking at the map, but got great directions from the cargo bike crew.

We didn’t leave quite early enough to beat the evening cold so I pulled over in Interlaken Park to throw my jacket over my cold little guy. Even with the downhill coasting, there was enough uphill to keep me too warm to need it myself. 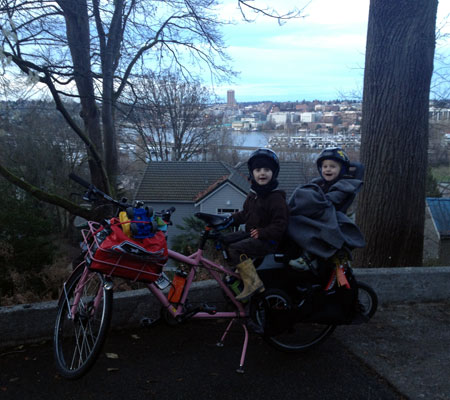 If it hadn’t been so warm (for Seattle) earlier in the day, I would have brought along the little guy’s new Slanket. It’s made a world of difference for him. He’d really been missing his fairing on the old bike. It shielded him from wind and rain and he could even get by without wearing mittens, but since the Slanket he’s stopped requesting we take the old mama bike when we head to the garage. Here’s a picture of the miracle garment from yesterday:

One last great bit of the ride was in north Capitol Hill (by Hamlin and Broadway) where I discovered a bunch of great bike markings. Circles and arrows easily led the way to the University Bridge. If only all routes could have this! 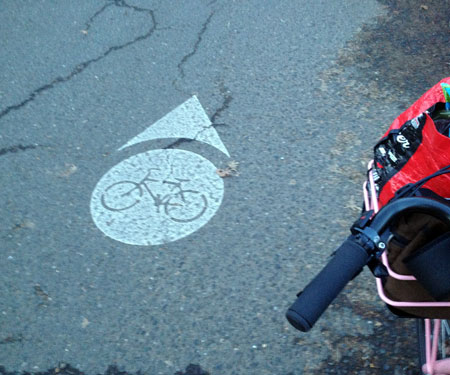