We left the house at 9:30 this morning and didn’t return until 7:15. In those nearly 10 hours we biked 25.4 miles…though we hadn’t set out with such a big day in mind. I blame the high mileage on the quality of kindie rock we Seattle-dwellers have become accustomed to hearing. The highlight of our day was supposed to be a free kiddie concert at Waterfront Park, but the first guy was pretty sucky and the second act covered three Disney princess songs before we just couldn’t take it anymore.

We took our time getting to the concert, starting with utilizing the bike as a stroller and walking a few blocks to a cafe with Mr. Familyride, who is recuperating from a broken shoulder and off the bike for a bit. In Ballard we stopped in at Dutch Bike Co. where Fritz diagnosed my slipping gear problem as “little feet.” Apparently my front passenger has been knocking the cable out of the eyelet. I tried to leave without fruit, but my passengers hollered at me until we went back for apple and banana. Nevermind we were a block away from the Ballard Farmers Market, which was our next stop, for honey sticks.

We chatted with some cyclists while walking through the locks. They were heading home from a big ride, but acted politely impressed at our Wallingford-Waterfront foray. Otherwise we crossed through fairly quickly, with just a quick peek at the fish ladder from above, because it was getting close to showtime. OK, one last stop because there’s a great blackberry bush on the Fort Street Bridge.

The day had started out incredibly foggy–we couldn’t even see the huge fishing boats close to the bike path. Fortunately, The Little Mermaid medley chased the fog (and us) away and it started feeling like spray park weather. Since our day felt suddenly very open, having planned to spend couple hours at Waterfront Park, we did a bit of exploring on the way back and discovered the elevator at the Helix Bridge. We admired the train tracks from above for a bit and then headed back down and onward to seashell park via the locks.

The front kid uncharacteristically fell asleep on the way there. No complaints here–the little guy rarely naps these days. He’s only two and certainly needs a nap, but in classic younger sibling behavior, he doesn’t want to miss a thing his big brother is up to. It worked out well, though. He snoozed on my arm and we wheeled him down into the dim fish ladder room where we watched salmon swim upstream for a while.

Seashell park was a bust. I’m not sure what the problem was, but apparently the water doesn’t spray out of the shells the right direction. So we decided we’d head over to South Lake Union Park for its properly-angled sprayers, but first we stopped for to-go sandwiches because all the unexpected biking was taking a toll on me. I’m not sure if bonk is the proper term for a recreational bike rider to use or if it’s reserved for real cyclists, but I bonked. So I hid in the shade at SLUP with my sandwich and juice while the monkeys went wild in the spray park. I blame the crap music earlier in the day for this, too. I don’t know why, but it’s all their fault. 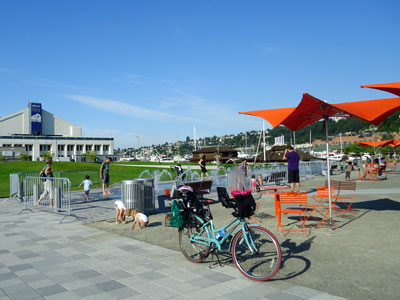 I eventually recuperated from “bonked” to “exhausted” and we headed home. We took the easy way up Stone because I didn’t trust myself to take the steep route which requires dismounting to walk half a block. I thought I might abandon the bike if that happened. While huffing and puffing up Stone I saw a dad with trailer bombing down the other direction…riding with no hands…taking his helmet off his head and adjusting it down in his lap. What?!? I know a trailer is a different beast than an attached kid seat, but come on!

Other than the alarming no-hands dad on the way home, it was a great day. I tend to avoid the touristy spots on weekends so today was a bit out of the norm. We got a lot more comments about the bike seats and the one less minivan sticker than normal–all positive. Rock on, Seattle.