Holy cow, I cycled 261.3 miles this month…assuming my math was right, which it probably wasn’t. But that figure has got to be close to the real total.

This morning started with a great discovery–I now have two speeds when I bike: normal/slow and eek-I’m-late. I left the house ten minutes later than intended this morning, but picked up my pace and actually passed people on the Burke-Gilman Trail. Real people. On bikes. It was pretty cool. I got to Ballard with time to stop by Dutch Bike Co for a coffee on the way to the Kidical Mass meeting point. I love that I can just wheel the bike in, kids and all, and stand in line for coffee. I used the BioLogic Vacuum Flask I gifted to my husband–I shoved it in the back of my basket and it didn’t drip. I’d still like to affix some some cup holders to the bike for all three of us if I can find room.

Lots of families came out for the Kidical Mass ride: two Madsens, an Xtracycle, a trail-a-bike, a FollowMe Tandem (WANT!), front kid seats, rear kid seats, trailers, and solo-rider kids. There was even another Bianchi Milano, but the fancier variety with internal hub. The owner had a drink cage attached. I should do the same. She also had a Dutch bike lock. I think seeing it on a Milano was just the kick in the butt I need to go get one. Her other mods were: wrap-around handlebars, Bobike Mini on the front, basket in front of the Bobike, and pannier on the back. 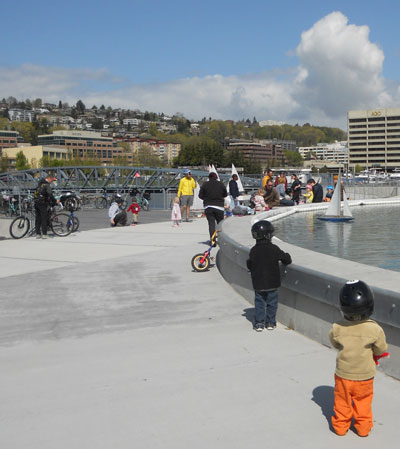 We rode to Lake Union Park and I even got to lead the ride for a couple blocks, to show everyone our secret train tracks below Westlake Ave. We snacked and played on the model boat pond and another Bianchi Milano showed up. This one sported an iBert and a trail-a-bike. Talk about a bunch of work horses. I still want an Xtracycle soon, though. The Xtracycle on the ride today had the FollowMe Tandem on the back, an extra kids bike in the FreeLoader bag as well as tons of other stuff. 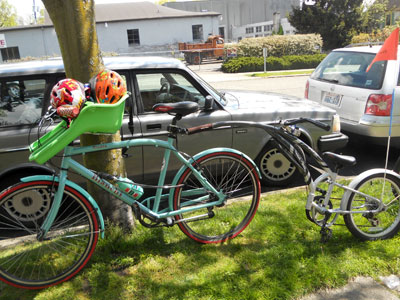 The other other Milano

Next up we rode to the Fremont Brewing Urban Beer Garden which is awesome! There were toys and tons of space and we were the last to leave the party. I rode up Woodland Park to Bridge and then up Stone so I didn’t have to walk the bike at all. Super end to a perfect day to close out a great month! 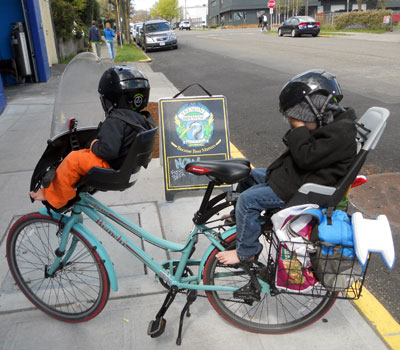