21.6 miles today! Maybe not much to a normal person, but it was plenty for me. We started out with a ride to the Westlake Light Rail Station to catch the train. It worked very well, two elevator trips and all. Then just a short ride from the Mt. Baker station to the meeting point for the Kidical Mass ride and we were ready to go. The South Seattle crew was so cool and we saw several MADSENs with motors for all those South Seattle hills. We all rode to Full Tilt Ice Cream in Columbia City, during which we got heavily rained on twice, but mostly had sunny skies. 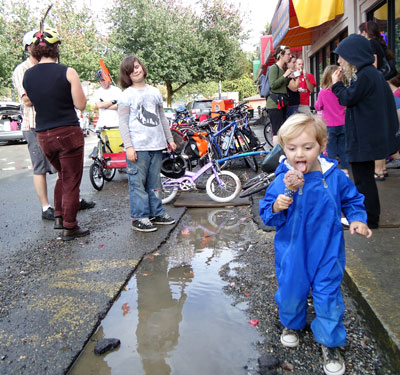 I followed Totcycle and another rider to Ballard via the Light Rail and the Elliott Bay Trail through the Locks. I can’t believe I hadn’t heard of the EBT before–it was beautiful! Brandt was smitten by it, too, since it runs alongside train tracks. Definitely worth the extra mileage. And apparently a slightly different route would have taken us over a very exciting loud wooden bridge.